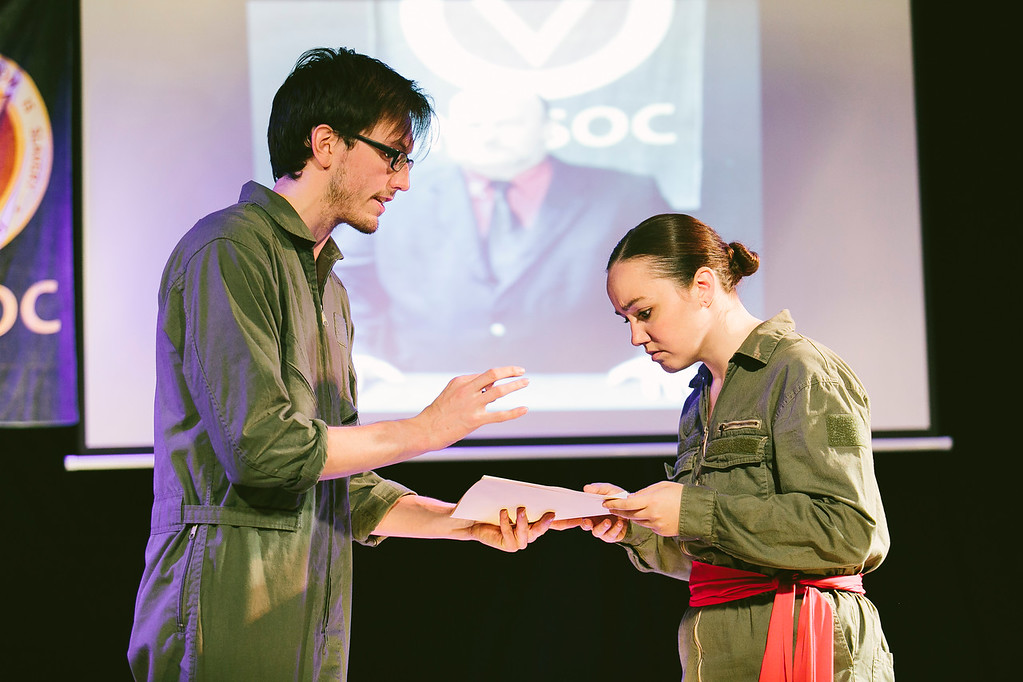 George Orwell’s 1984 is a novel more often cited than read. Perhaps 30 words from it, starting with “Big Brother” have entered everyday language. Some people may forget that within its pages lie stories of love, betrayal and sadistic torture. The stage version by Robert Owens, Wilton E. Hall, Jr and William Miles, Jr., running through Saturday, Aug. 19, at Shoppingtown’s Central New York Playhouse, hews more closely to Orwell’s narrative than do the two movie versions, with Edmond O’Brien (1956) and John Hurt (1984).

The lead role, Winston Smith (Derek Powell), is tough to play because he begins as a phlegmatic cog at the Ministry of Truth, where he corrupts history, and cannot show emotion until later. Jackbooted Julia (Jackie Bleich) declares her love for him, even though she belongs to the Anti-Sex League. They tryst in a shabby room overseen by a colorful landlady (Binaifer Dabu). It appears that red-bearded colleague O’Brien (Jeremiah Thompson) shares their desire to resist the imposed lying. But nothing can be believed and no one can be trusted.

Written in 1963, the show is not often revived and presents a challenge to fledgling director Christopher Lupia. This production’s biggest coup is the booking of local celebrity author Bruce Coville, former head of Full Cast Audio, as the barking, authoritarian Loudspeaker.