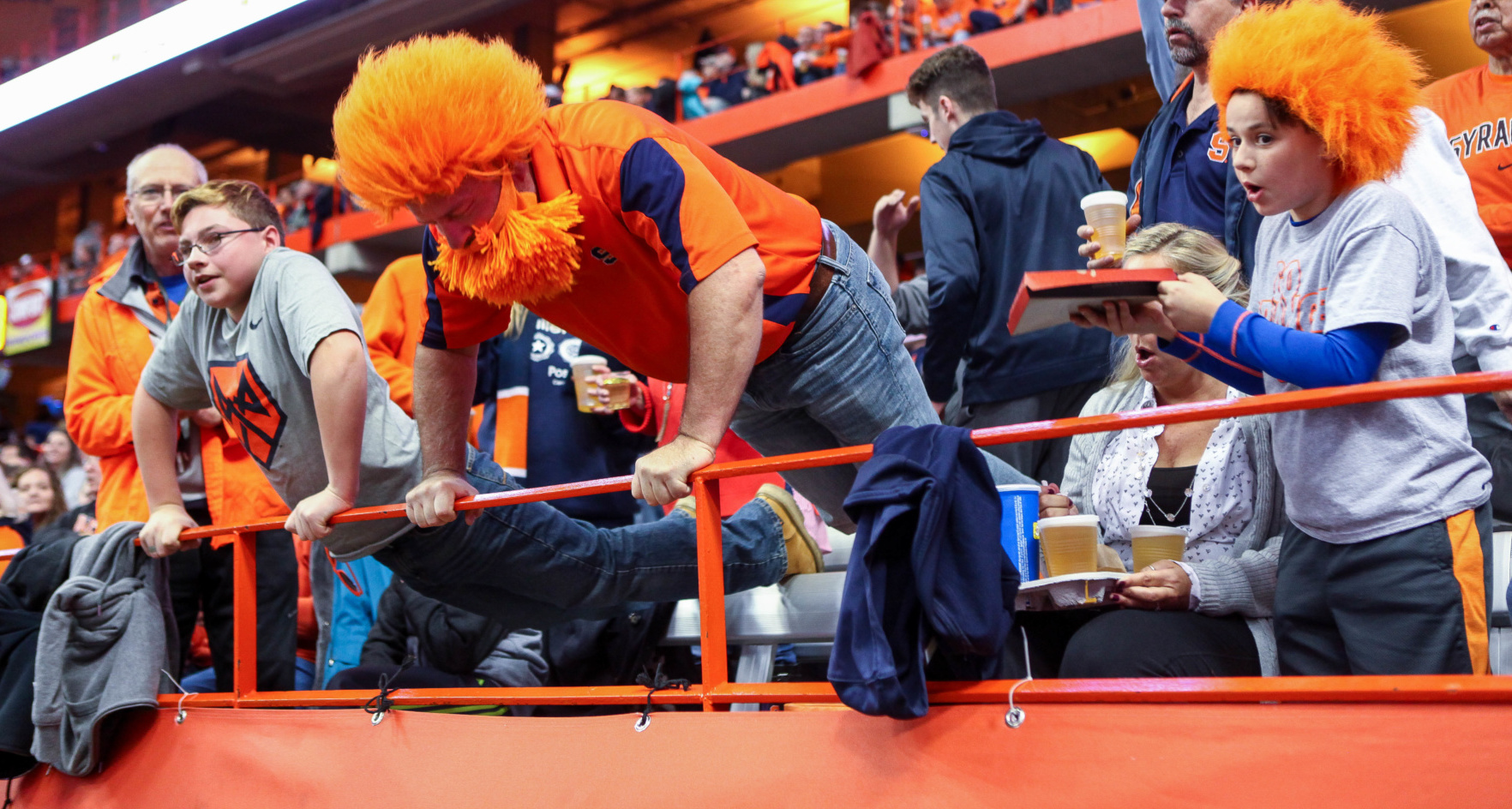 When all is said and done, we may look back and sum up this Syracuse University football season as the thrill of victory and the agony of defoot.

The thrilling victory was a 27-24 upset of then-No. 2 and now-No. 4 Clemson Oct. 13 at the Carrier Dome. It was the biggest win for the Orange since SU knocked off No. 1 Nebraska in 1984 at the Dome. And “defoot” is the injured right foot of star quarterback Eric Dungey, whose availability in the final two games of the season will likely determine if Syracuse will qualify for its first bowl game since 2013.

That seemed like a lock following the victory over Clemson, which improved Syracuse’s record to 4-3. The Orange needed to win just two more games to go bowling, and the schedule seemed favorable with road games against two powerhouses having down years (Florida State and Louisville) and home games against Wake Forest and Boston College.

After playing well but losing at No. 8 (and now No. 2) Miami Oct. 21, the Orange visited Florida State and Dungey was injured on the fifth play of Syracuse’s first possession. The Orange fell behind 14-0 before Dungey returned in the second quarter, and SU lost 27-24 as Cole Murphy’s 43-yard field goal attempt as time expired was partially blocked and sailed wide left. SU coach Dino Babers said early last week that he expected Dungey to play against Wake Forest Nov. 11 at the Dome. But after warming up before the game, Dungey didn’t play in the first half and was wearing a boot on his right foot for the second half. Syracuse has not provided details of Dungey’s injury.

Senior Zack Mahoney, who started his SU career as a fifth-string walk-on, replaced Dungey against Wake Forest and played a strong first half followed by a wobbly second half. Still, SU led 38-24 at halftime and 43-40 at the end of three quarters, but the Demon Deacons outscored the Orange 24-0 in the final quarter and coasted to a 64-43 win at the Dome.

Mahoney accounted for 422 total yards (384 passing, 38 rushing), 74 more than Dungey’s average of 343.7, which, by the way, ranked seventh in the nation entering last weekend’s games. But Dungey is SU’s emotional leader and most dynamic player, and the Orange just doesn’t respond well as a team when he’s not playing, as Mahoney is now 1-7 as a starter in the past three years.

“This is my second year in an offense for the first time in college,” said Mahoney, who played in a different system under former coach Scott Shafer in his first year at Syracuse. “I feel very confident running it. Unfortunately, both my last two starts have been losses. But if I play (this week), I will play with as much confidence as I can.”

Against Wake Forest, the defense let the Orange down as the Demon Deacons (6-4) gained 734 total yards, quarterback John Wolford accounted for 499 total yards and six touchdowns (three passing, three running), and Wake Forest outscored Syracuse 40-5 in the second half and scored the most points ever for an opponent at the Dome.

As Babers said, “There is no more room for error,” as the Orange must win its final two games to clinch a bowl appearance and make this season feel like it wasn’t a disappointment. On Saturday, Nov. 18, 3:30 p.m., Syracuse visits a Louisville team led by the defending Heisman Trophy winner, quarterback Lamar Jackson. The Cardinals (6-4) were ranked No. 16 at the start of the season, but fell to two ranked teams (Clemson and North Carolina State) and two teams that have played much better than anticipated (Boston College and Wake Forest).

“We are up on the cliff now,” Babers said. “We need to go down there to our next opponent (Louisville), who won (Saturday against Virginia). They’ve got fabulous players and it’s at their place and we have to find a way to win.”

The Orange (4-6) is 0-4 on the road this season (albeit against four difficult opponents in LSU, NC State, Miami and Florida State), and it hasn’t won a road game since last Oct. 22 at Boston College. It’s hard to imagine the Orange winning on the road without Dungey, but if SU can find a way to beat Louisville it’ll still have to conquer Boston College (5-5), which like Syracuse has lost to some difficult opponents (Wake Forest, Notre Dame, Clemson, Virginia Tech and NC State).

History provides some hope. In 2007, the Orange visited Louisville and defeated the heavily favored Cardinals 38-35. And Syracuse has won three of its last four games against Boston College, including a 34-31 thriller in 2013 that ultimately secured a berth in the Texas Bowl.

It’s also possible the Orange could finish 5-7 and fill one of the 78 bowl spots if there aren’t enough six-win teams. In that case, teams are selected on the strength of their most recent academic scores.

But Syracuse can avoid that scenario, and rewrite how we’ll look at this football season, by winning its final two games. To that end, a healthy Dungey would be an immense help.

“No more time for any excuses,” Orange linebacker Zaire Franklin said after the Wake Forest game. “Coach Babers told us that the last time we were here (at the Dome against Clemson) we had probably the biggest win in program history and personally, I feel more embarrassed — not embarrassed, I feel more disappointed — in this game. Moving forward to next week, we have a sense of urgency. We have to find a way to get a win.”

The SU men’s basketball team routed Cornell 77-45 Nov. 10 in a season opener at the Dome that was notable because it featured Orange Hall of Fame coach Jim Boeheim coaching against his son, Big Red freshman forward Jimmy Boeheim. Jimmy sank a three-pointer in front of the Orange bench on his first shot less than 30 seconds into the game. He finished with 11 points and five rebounds in 26 minutes, and received a hug from his father after the game.

When a sked what Jim said to him, Jimmy smiled and said, “He said I was close to having a good game.”

Jimmy said he was nervous at the start, but soon settled into the flow of the game. He said it was “a little weird” to hear his father yell from so close to the floor.

“I mean, obviously, I’ve heard it at me,” Jimmy said. “I just kind of looked over (at the Orange bench).”

Jim downplayed his emotions when asked what he was feeling with his son on the opposing team.

“Well, I’m not playing so it doesn’t matter what my emotions are, really,” Boeheim said. “I’ve just got to coach the team and you’re hoping your son does well and plays well. I thought he did a really good job of getting by and putting the ball on the floor, and it’s hard to do that against our zone.”

Next year, the Boeheim vs. Boeheim storyline will grow as Buddy Boeheim, Jim’s other son and Jimmy’s brother, joins the Orange.

“That’ll be a whole other thing, but we’ve competed our entire life,” Jimmy Boeheim said. “So it’ll be another chapter, just on a bigger stage.” SNT