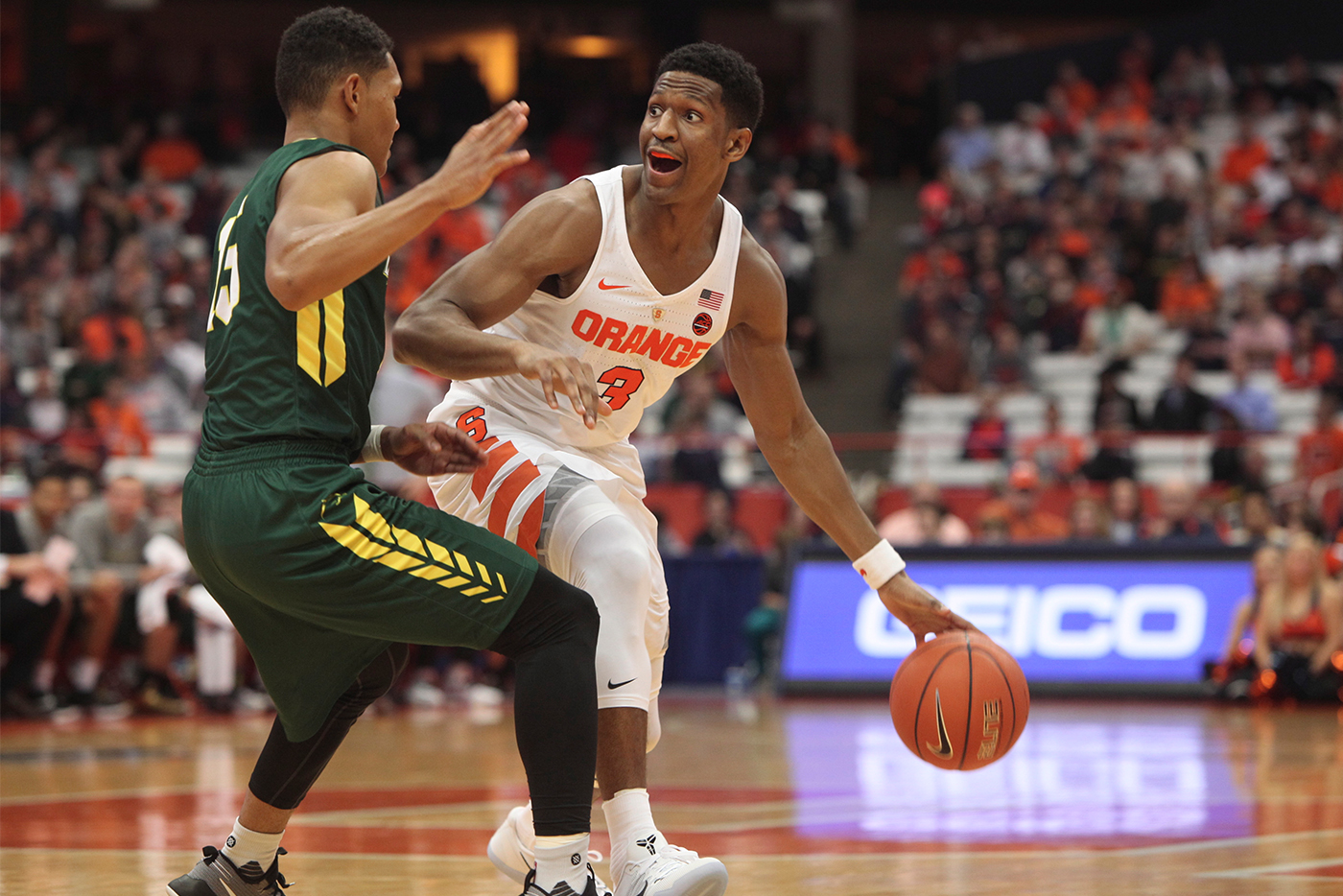 SU football and basketball teams both works in progress.

Within about 21 hours this past weekend at the Carrier Dome, we caught a glimpse of the wide gap that currently exists between Syracuse University’s football and men’s basketball teams.

Under first-year coach Dino Babers, the football team is very much a work in progress, and on Saturday afternoon, Sept. 12, the Orange couldn’t overcome the loss of its best player (quarterback Eric Dungey), a controversial chop block penalty, and the inability of its defense to stop North Carolina State on third down. A mediocre Wolfpack team (5-5, 2-4 in the Atlantic Coast Conference) defeated the Orange 35-20, making it unlikely that the Orange (4-6, 2-4) will play in a bowl game.

“We have to take our lumps right now,” Babers said. “Big brother’s punching little brother in the chest and telling him not to cry. We’re going to take it right now, but there’s going to be a time when our babies grow up and I look forward to that day.”

Under 41st-year coach Jim Boeheim, the basketball team is also a work in progress, but in a much different way. In its season opener Friday night, Nov. 11, the Orange could overcome a dismal game by its best player (Tyler Lydon), a shoddy effort on the boards, and a porous press defense because it has the talent to return to the Final Four for a second consecutive season. Syracuse thumped undermanned Colgate 83-55, extending its winning streak over to the Raiders to 51 — the longest current winning streak in Division I.

“We had a good stretch (offensively) in the middle and at the start of the second half, but at the end they went zone and it was like we had never seen a zone; we weren’t very good at the end there,” Boeheim said. “But overall, it’s the first time, the first game, we’re happy to get it, and we’ll get back to work tomorrow and try to get a little better.”

Entering this past weekend’s games, Dungey ranked second in the ACC in total offense (330.2 yards per game) to Louisville’s Heisman Trophy candidate Lamar Jackson. But Dungey, a sophomore, left the Nov. 5 loss to Clemson late in the first quarter after absorbing a hard hit to his shoulder and head area and apparently suffering his third concussion in two years. Redshirt junior Austin Wilson replaced Dungey in the 54-0 loss to Clemson, but junior Zack Mahoney started against NC State. The Orange missed Dungey’s ability to run and make quick short throws against a Wolfpack team that ranks among the national leaders in run defense. SU rushed for just 28 yards — its lowest total since rushing for -15 against Cincinnati in 2007 — and that’s why the Wolfpack held a whopping 41:18-18:42 edge in time of possession.

Still, Mahoney (13-of-24 for 190 yards, one touchdown and one interception) nearly pulled it out as he connected with wide receiver Alvin Cornelius on a 34-yard touchdown pass that would put the Orange within a two-point conversion of tying the game midway through the fourth quarter. But the touchdown was called back because SU was whistled for a questionable chop block penalty. Third-string center Donnie Foster, who entered the game in the previous series when Colin Byrne went out with an injury, put his hands lightly on a Wolfpack lineman as the lineman was being blocked low by running back Dontae Strickland.

Mahoney was sacked on the next play, the Orange was forced to punt and NC State’s star running back, Matt Dayes, scored his third touchdown of the game with about five minutes left against a worn-out SU defense that allowed the Wolfpack to convert on 10 of 18 third-down plays.

“It’s really disappointing when you’re playing great defense on first and second down and can’t get off the field on third down,” Orange linebacker Zaire Franklin said. “I think their play-calling and execution was just better than ours today.”

Syracuse could receive a bowl bid with a 5-7 record, but even that fifth win is going to be hard to get with Dungey “probably doubtful” to play this week, Babers said. The Orange hosts No. 17 Florida State (7-3, 4-3) on Saturday, Nov. 19, 3:30 p.m., at the Dome, then closes the regular season Nov. 26 by visiting a Pittsburgh team that pulled off the season’s biggest stunner with a 43-42 win over No. 3 Clemson this past Saturday.

One more win would be nice, and a bowl game would be even better since it would give the youthful Orange more practice time as they continue to learn the intricacies of Babers’ fast-paced offense. But as Babers has been reminding us all season, rebuilding SU into an ACC title contender is a long-term project.

“These guys are getting better and we are going to continue to get better,” Babers said. “It’s going to be a very, very clear sky for us in our future.”

Under Boeheim, the Orange basketball team never rebuilds, it reloads. Fortunately for SU, the soft early-season schedule will allow for the kind of mistakes the team made against Colgate as Boeheim integrates three transfers and two freshmen into his nine-man rotation.

Boeheim was upset that the taller Orange didn’t have more than a 46-40 edge on the boards against the Raiders, and he said Syracuse’s press defense was “horrendous.”

“(The press) was so bad I wanted to keep trying it to see if it got better and it didn’t,” Boeheim said. “It was horrendous. It wasn’t even worth saying that we pressed them. If that’s the extent of what we can do with the press, you won’t see it much.”

Lydon, meanwhile, scored just two points against Colgate on 1-for-6 shooting and, counting SU’s two exhibitions, he was 0-for-11 on three pointers this season as the No. 19 Orange entered Tuesday night’s game against Holy Cross at the Dome. But that hardly mattered against Colgate as Tyler Roberson (18 points), Andrew White (17), John Gillon (13) and Frank Howard (11) shot a combined 68 percent (25 of 37) and point guards Howard and Gillon combined for 15 assists with just three turnovers.

If only Babers had that kind of depth to overcome the loss of Dungey and several other key players to injury this season.

“Before the game I sit there and look around and we’ve got some pieces,” Howard said, smiling. “We’ve got a lot of depth, from me to the freshmen to the bigs, and everybody’s working and contributing.”