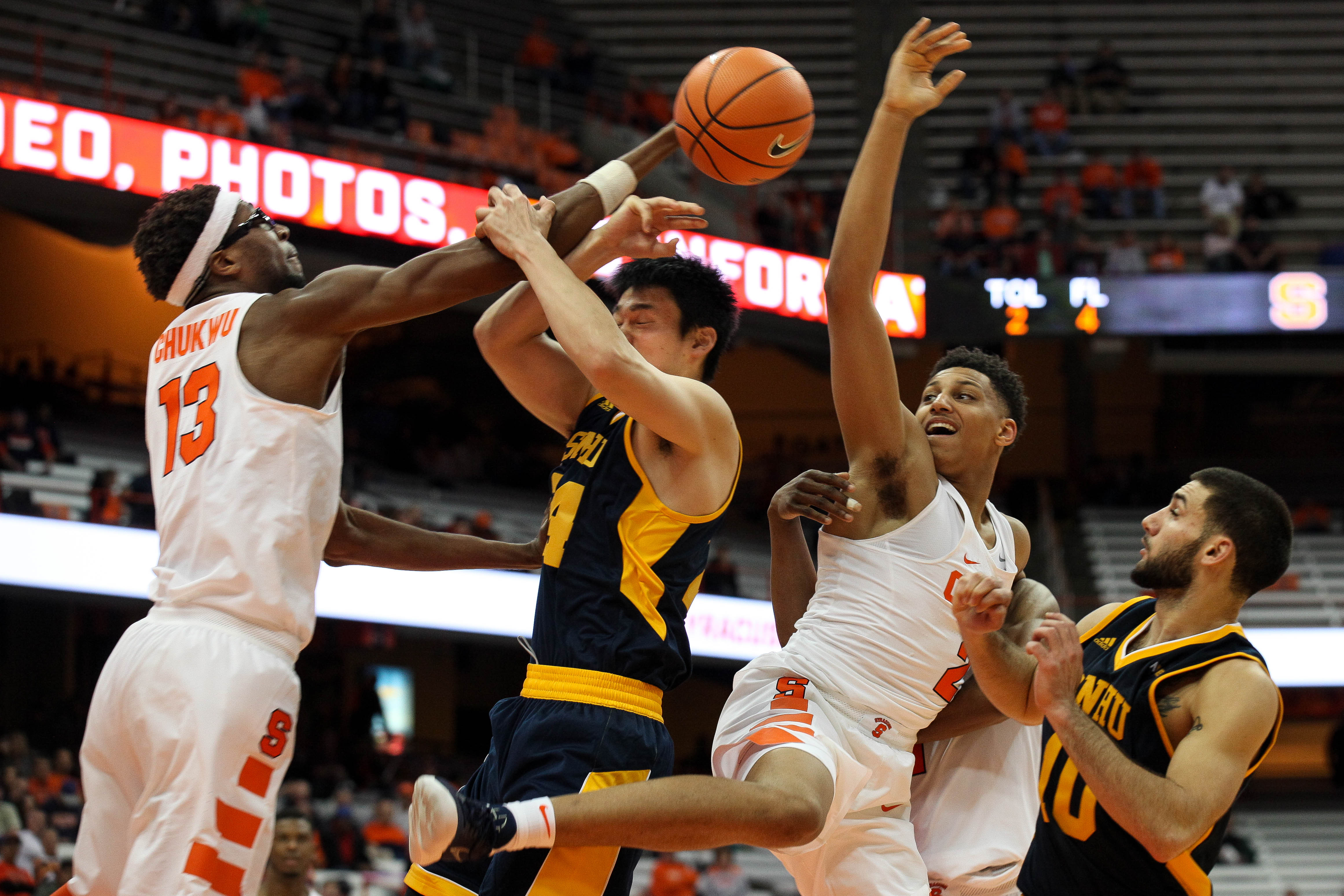 Quick, when was the last time we entered November with the Syracuse University football team having a better chance of making a bowl game than the Orange basketball team of making the NCAA Tournament?

If you said a long time ago, you’re probably right. Despite its heartbreaking 27-24 loss at Florida State Nov. 4, the football team still has a fighting chance to qualify for its first bowl game since 2013 and only its fifth bowl game in the past 16 years. The Orange (4-5) needs to win two of its final three games, starting with the contest against Wake Forest at the Carrier Dome on Saturday, Nov. 11, 3 p.m. The basketball team, meanwhile, looks from the outside like it’s headed for a second consecutive National Invitation Tournament (NIT) appearance. The Orange lost six key players from last year’s team: Tyler Lydon, Andrew White, John Gillon, Taurean Thompson, DaJuan Coleman and Tyler Roberson. Those players accounted for 81 percent of SU’s points, 82 percent of the rebounds and 66 percent of the assists.

And that team, you’ll recall, lost in the second round of the NIT Tournament.

So it’s fair to ask: How can this year’s outfit — with only three players who appeared in a game for the Orange last season (Tyus Battle, Frank Howard and Paschal Chukwu) and with four freshmen, one redshirt freshman and one graduate transfer among its nine scholarship players — exceed last year’s team that finished 19-15 overall and 10-8 in the ultra-competitive Atlantic Coast Conference?

The Orange did not receive a single vote in the AP preseason poll that was released last week. And in the ACC media preseason poll, SU was picked to finish 10th in the 15-team league.

Now the good news: Syracuse hasn’t lost a game yet, and the Orange players are embracing the fact that no one outside of their locker room believes they have a chance to reach the NCAA Tournament this season for what would be the 33rd time in Coach Jim Boeheim’s 42 seasons.

“I think it’s a good thing. All these guys are playing with a chip on their shoulder,” said Battle, a sophomore and the team’s best returning player. “We have some good players on this team. I’m not even worried about what people say about our roster or anything like that. We have guys who block shots, get rebounds, we have explosive guys, athletic guys. So I’m definitely not worried about that.”

After playing two exhibitions, the Orange opens the regular season against Cornell on Friday, Nov. 10, 7 p.m., at the Dome. The game features Boeheim coaching against his son, Jimmy, a 6-8 freshman who played 21 minutes and scored two points in the Big Red’s exhibition against Cortland Nov. 4. “You know, I hope Jimmy plays well,” Jim Boeheim said. “As long as we win, I’ll be happy. It’ll be tough. I won’t lie.”

As we get ready for tipoff, here’s a look at the 2017-2018 Orange and two keys to their hopes for early-season success:

Guards: With shooting guard Battle, junior point guard Frank Howard and senior graduate transfer Geno Thorpe, the backcourt is SU’s strongest and most experienced unit. Boeheim says the 6-6 Battle, the team’s leading returning scorer (11.3 points per game), is “much improved” this year and he’ll have to be since he’ll be the focus of every opponent’s defense.

The 6-5 Howard (4.5 points, 3.6 assists per game) started SU’s first 14 games last year before Gillon took over and his playing time dwindled. Howard, who missed most of the offseason after undergoing surgery to repair torn muscles in his core, said he’s excited about this year’s team and compares it to his freshman year when the Orange reached the Final Four.

“I kind of got that same feel how I did my freshman year: Guys are going to fight, guys are going to be engaged, it’s about the team, we’re all here playing for each other,” Howard said. “It’s just a good vibe in that locker room.”

The 6-3 Thorpe, who can play either guard position, came to Syracuse from South Florida, where he averaged 15.8 points and 4.8 assists per game last season. He turned his ankle in practice about two weeks ago and sat out the Orange’s first exhibition against Southern New Hampshire Nov. 1. Thorpe said he expected to be ready for the opener against Cornell, and the Orange will need his experience and versatility. With a healthy Thorpe and against certain teams, the Orange can insert Battle at small forward and use Howard and Thorpe in the backcourt.

Freshman Howard Washington, a Buffalo native who attended the Athlete Institute Basketball Academy in Toronto, is a 6-3 point guard who scored 11 points with two assists in 25 minutes in SU’s 84-54 exhibition win over Southern New Hampshire. Boeheim has praised Washington’s work ethic and said he reminds him of former SU point guard Tyler Ennis.

Forwards: Thompson’s mysterious transfer to Seton Hall left a gaping hole in the frontcourt that will have to be filled by 6-8 freshman Oshae Brissett, who also played at Toronto’s Athlete Institute Basketball Academy. He scored 17 points and grabbed 11 rebounds against Southern New Hampshire. Like Washington, Brissett would have been a highly ranked recruit had he played in the United States, Boeheim said.

“The young players are good players,” Boeheim said. “If they played over here they’d be rated and everybody would be happy thinking they were good. It’s all right. They’re good players.”

Moyer, who grew to 6-8, 215 pounds in his redshirt year, is the most experienced of the forwards. Moyer practiced against the likes of Lydon, White and Thompson last year and said redshirting was “the best decision I ever made.”

“I am in better shape, my body is college-ready, my skill and confidence level are much higher,” Moyer said. “I understand coach much better and what he expects.”

The third forward is another freshman, 6-9 Marek Dolezaj from Sloviaka, who will need to put some meat on his 180-pound frame if he’s going to survive underneath the basket in the ACC. Boeheim said Dolezaj is an “American kind of player” who can put the ball on the floor and drive.

“He doesn’t understand me much,” Boeheim said, laughing, “but he understands the game.”

Centers: Paschal Chukwu has appeared in just seven regular-season games the past two seasons after transferring from Providence. The 7-2 junior missed most of last season after tearing the retina in his right eye.

Now wearing goggles, Chukwu will be backed up by 6-10 freshman Bourama Sidibe, who was not a top-100 rated prospect but played at powerhouse St. Benedict’s Prep in Newark, N.J. First and foremost, Chukwu and Sidibe will have to clog the middle of SU’s 2-3 zone defense and alter the shots of those who penetrate the lane.

Against Southern New Hampshire (which didn’t have a starter taller than 6-7), Chukwu and Sidibe combined for 12 of Syracuse’s 16 blocked shots.

“Those two guys are pretty good shot blockers. They’re not average shot blockers,” Boeheim said. “That’s a big factor. The threat of a blocked shot is a factor down there.” Chukwu, however, fouled out in 18 minutes against a Division II team and that bears watching because the Orange want Chukwu and Sidibe to at least share time at center.

Key No. 1: The Defense. The biggest reason the Orange didn’t make the NCAA Tournament last year was the poor play of its defense against better opponents. The only way this year’s offensively challenged team will win games is if the defense is there every night.

“We’re not going to be better offensively than we were last year,” said Boeheim. “We’re still young, but I think we’re hopefully bigger and longer and should be better defensively.”

It will help that the 6-0 Gillon is no longer at the top of the zone and true centers will replace Lydon and Thompson in the middle. Boeheim has generally stayed away from the press, but the Orange did use it effectively against Southern New Hampshire and may use it more this season.

“I feel like we have a Syracuse team this year,” Howard said. “Every position is long, athletic, and we can get out and run.”

Key No. 2: The Non-Conference Schedule. The only reason SU made its improbable Final Four run in 2016 was because the Orange won a few big non-conference games that vaulted SU into the NCAA Tournament. Conversely, the Orange failed to make the tournament last year despite a 10-8 ACC record because of horrible non-conference losses to Connecticut, Georgetown and St. John’s.

To have a chance of making the tournament this season, the Orange will have to navigate through its non-conference schedule without any bad losses and with a win or two against a high-profile opponent: Maryland, No. 4 Kansas, Connecticut and Georgetown.

“You look at a team like last year’s team, that should be a good enough example for the young guys,” Moyer said. “You see what we did in the ACC? I think when all was said and done, we were easily a top-25 team in the country.

“I think the young guys know and I hope they realize that these games are critical for us, every single game,” Moyer added. “A lot of these games can help us get an edge when March rolls around and the selection show comes on.” SNT