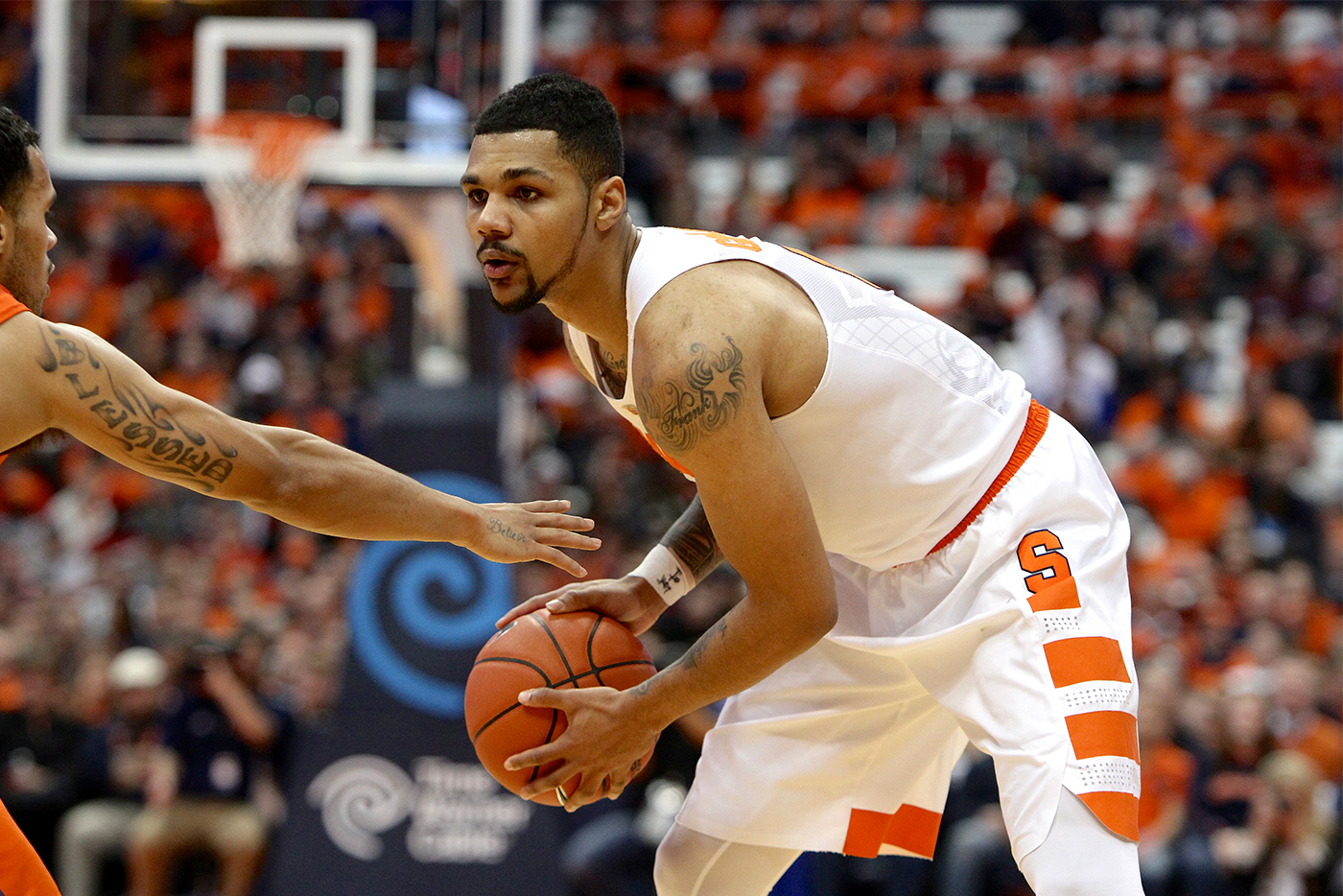 With an 1-4 record in the ACC thus far, SU’s road will only get more difficult.

Here’s how it works in the sports world: When you’re a fan of a team and things aren’t going your way, you have to blame somebody.

For the Syracuse University men’s basketball team, which is 0-4 in the Atlantic Coast Conference after the 84-73 loss to No. 6 North Carolina at the Carrier Dome on Saturday, Jan. 9, we’re going to try something different on the behalf of all SU fans. We’re going to blame one of the signature moments in Orange history. Since Feb. 12, 2014, SU is a pedestrian 32-26, and that’s with 15 wins against Division I lightweights such as Colgate (twice), Cornell (twice) and Kennesaw State. Worse yet, the Orange is 12-18 in the Atlantic Coast Conference and has lost its last seven conference games, including the first four this season for its first 0-4 conference start since 1996-1997 in the Big East.

Do you remember what happened on Feb. 12, 2014? Then-SU point guard Tyler Ennis drained a 35-footer at the buzzer to lift the No. 1-ranked Orange to a 58-56 win over Pittsburgh at the dreaded Peterson Events Center. The improbable win improved SU’s record to 24-0 — the best winning streak in school history — and had all SU fans believing that destiny and fate had lined up to deliver the program’s second national championship.

Sports karma can work in mysterious ways. For Derek Jeter and Tom Brady, the Jeffrey Maier game and the tuck rule game sparked an incredible run of success for them and their teams. But for whatever reason, Ennis’ miracle shot has seemed to have the opposite effect.

Consider that since Feb. 12, 2014: SU lost at Duke with Coach Jim Boeheim famously ripping off his jacket before getting ejected for the first time in his Hall of Fame career; the once-magical 2013-2014 season ended with an ignominious 55-53 loss to Dayton in the NCAA Tournament; and Ennis and forward Jerami Grant left earlier than they should have for the NBA.

Also, DaJuan Coleman missed the entire 2014-2015 season while recovering from knee surgery and forward Chris McCullough missed half of that season with a knee injury before bolting to the NBA; the Orange, while under an NCAA investigation, banned itself from postseason play in 2015; and the NCAA came down hard on Syracuse and Boeheim for the program’s penalties by taking away scholarships, suspending Boeheim for nine games and removing 101 wins from Boeheim’s record.

And, after a 6-0 start this season that included wins over ranked teams Connecticut and Texas A&M in the Battle 4 Atlantis, the NCAA moved Boeheim’s suspension up and the Orange went 4-5 in his absence under assistant coach Mike Hopkins and have lost seven of the last 11 games.
Other than that, Mrs. Lincoln …

“We have to get this thing fixed. We’re going to try,” Boeheim said after returning from his suspension against North Carolina and receiving a standing ovation from the crowd of 26,811. “There’s 14 games left to go. There’s a long way to go. We started 0-4 one year (1996-1997) and we won 10 games that year in the league (including a win in the Big East Tournament). We have a lot of hard work ahead of us.”

Getting back to the Ennis shot, it’s fair to ask if that play and all of the hype around it elevated Ennis to a level where he didn’t belong, as he was selected 18th overall in the 2014 NBA draft but has been floating in NBA purgatory ever since. If Ennis had stayed for one more year, freshman point guard Kaleb Joseph would have been able to sit and watch for one year, the way future NBA Rookie of the Year Michael Carter-Williams sat his freshman year behind veteran point guard Scoop Jardine. If Joseph was running the point now, forward-turned-point guard Michael Gbinije would be able to play his natural position. Gbinije is one of the nation’s top players at the point, but he can’t pass the ball to himself and it would help to have an Ennis-like distributor for Gbinije, Cooney, freshman sensation Malachi Richardson and Tyler Roberson.

Against North Carolina, the Orange led 56-50 with 8 minutes, 28 seconds remaining. But the Tar Heels finished the game on a 34-17 run as they executed the high-low offense to perfection and took advantage of SU’s lapses and lack of muscle in the back of the 2-3 zone.

“It was a great effort but it was a poor defensive effort in the last seven or eight minutes of the game,” Boeheim admitted. “There is no excuse for that. We have to do better in those situations, and we will go back to work and try to get better there.”

Most alarming has been SU’s inability to finish strong as it has faltered down the stretch in losses to Wisconsin, Pittsburgh, Miami, Clemson and North Carolina. If the Orange had won two of those games, we’d still be talking about making the NCAA Tournament instead of avoiding the NIT.

The remaining schedule is unkind, too: SU faces road games at No. 14 Duke, No. 4 Virginia, No. 16 Louisville and North Carolina, and a home game against No. 24 Pittsburgh (rankings as of Jan. 4). The Orange can start to get it going in the right direction Wednesday, Jan. 13, when it hosts lowly Boston College at the Dome.

Perhaps an Ennis-like miracle along the way wouldn’t hurt, either; you know, to help reverse the curse.

“This is just a bad stretch and you have to learn from it and learn how to close games and get better,” said Cooney, who scored 27 points against North Carolina. “We have no other choice.

“Every single game moving forward is life or death,” Cooney added. “You look at our record right now and you’ve got to win games.”

News and Blues
Grandstand Exit Is A Booming Business
To Top