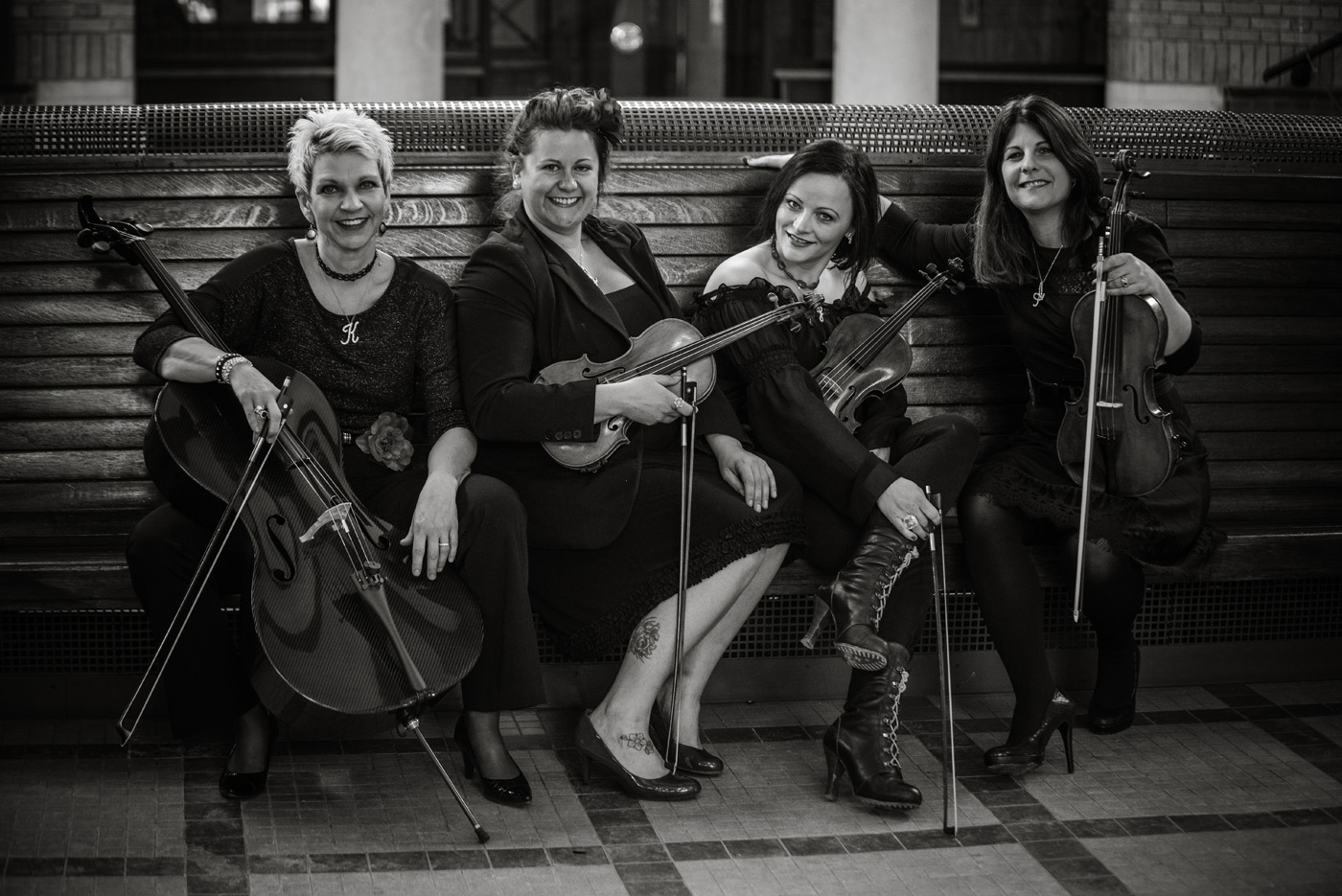 They call themselves Opus Black, a name reminiscent of an experimental metal band. Indeed, the group does experiment and push musical boundaries, but not with drums and guitars.

Instead, the Opus Black String Quartet is an alternative string ensemble with a penchant for the unorthodox. Built on a common foundation of classical training, their backgrounds are as diverse as their repertoire, counting among them a German-born mezzo-soprano and violinist, a big band horn player and cellist, a blues fiddler and a Celtic-classical violist.

Rehearsing at the studio of first violinist Liz Friedel, the foursome played Led Zeppelin’s “All My Love” before moving on to a jazzy deconstruction of “And I Love Her” by The Beatles.

Friedel, 31, is a self-described musician-for-hire and freelance violinist through her business, Music with Liz. She performs regularly with the groups Vagabond Station and D-Ras and the Lizard, crossing genres from bluegrass and Irish fiddle to jazz and blues. Friedel also teaches at her private studio in Verona.

“We’re starting a revolution,” she noted. That revolution is a push toward collaboration among Central New York musicians and a movement outside the classical realm. Their folders held music by The Cranberries, Eurythmics, Queen and American minimalist composer Philip Glass.

They aren’t the first classical-turned-alternative quartet in the market; Los Angeles-based Vitamin String Quartet has been recording pop-rock-alternative tribute records for years. Yet they are the first in Central New York, and they have their own style and ethos. For every member of Opus Back, teaching is as much of their lives as performing.

Kristen Kopf, the group’s cellist, has been teaching music in public schools for 23 years, many of them as director of orchestral programs at Roxboro Road Elementary and Middle Schools. She currently teaches classroom music at Gillette Road Middle School in Cicero, where her students learn guitar and play in a steel-pan band.

Commenting on the challenges facing present-day arts organizations, particularly those within classical music, Kopf mentioned a fear of change that keeps the arts from reaching young audiences.

“Consumers change, children change, everything keeps changing,” she said. “Doing the same 100- or 200-year-old model is ineffective. It doesn’t work.”

That perspective drives the group to perform in nontraditional venues like bar gigs and festivals. In their premiere performance last May, they opened the Bacon and Bourbon Festival at the Ridge Golf Club and Tavern in Chittenango.

Jordan Davies, organizer of February’s Beats in the Sheets concert at Eastwood’s Palace Theatre, was the group’s original violist but has since left to focus on his new business, oRIDGEinal Productions. When Davies left the group, Allyson Sklar took over as violist.

Sklar, 54, is also deeply rooted in education. She received her master’s in education from the Manhattan School of Music and taught strings in New York City public schools while freelancing as a performer, picking up a Suzuki teaching certification along the way. She also plays in the Irish fiddling group Craobh Dugan.

Now based in Utica, Sklar teaches violin and viola at her New Hartford studio, Valley Talent Education Center, including both classical and Celtic fiddle technique.

She enjoys Opus Black’s jazz repertoire, and is looking forward to increasing their exposure and sharing their music. “Just a lot of performances,” she said. “I’d like to play a lot of concerts, weddings, parties.”

Education in schools, studios and the listening public is central to the ethos of Opus Black. Violinist Juliane Price is the director of Clever Canaries Music Together, an early childhood and family music program with locations in Rome, Clinton and Hamilton.

Price, 37, is a classically trained mezzo-soprano with a master’s degree in vocal performance. Originally from Germany, she played the violin as a child before shifting her focus to voice. For her, seeing the reaction of new listeners is one of the best parts of the job.

“They’re curious,” she said. “In the bars in Sylvan Beach, if you talk about it, they go, ‘You know, I would actually go and listen to that string quartet,’ whereas they would never ever go to a Beethoven or a Haydn or Bach or Mozart concert.”

Their next performance will be Tuesday, March 22, at Hamilton’s Colgate Inn, as part of the Local Music Project, a weekly concert series organized by folksinger-guitarist Bruce Ward.

“Most people — and I guess it’s that classical handicap — you learn how to read music and you get stuck on the page,” said Friedel. “It happens to everybody, and it takes a long time to break yourself away from the page. This is a unique group of people. We can do both.”