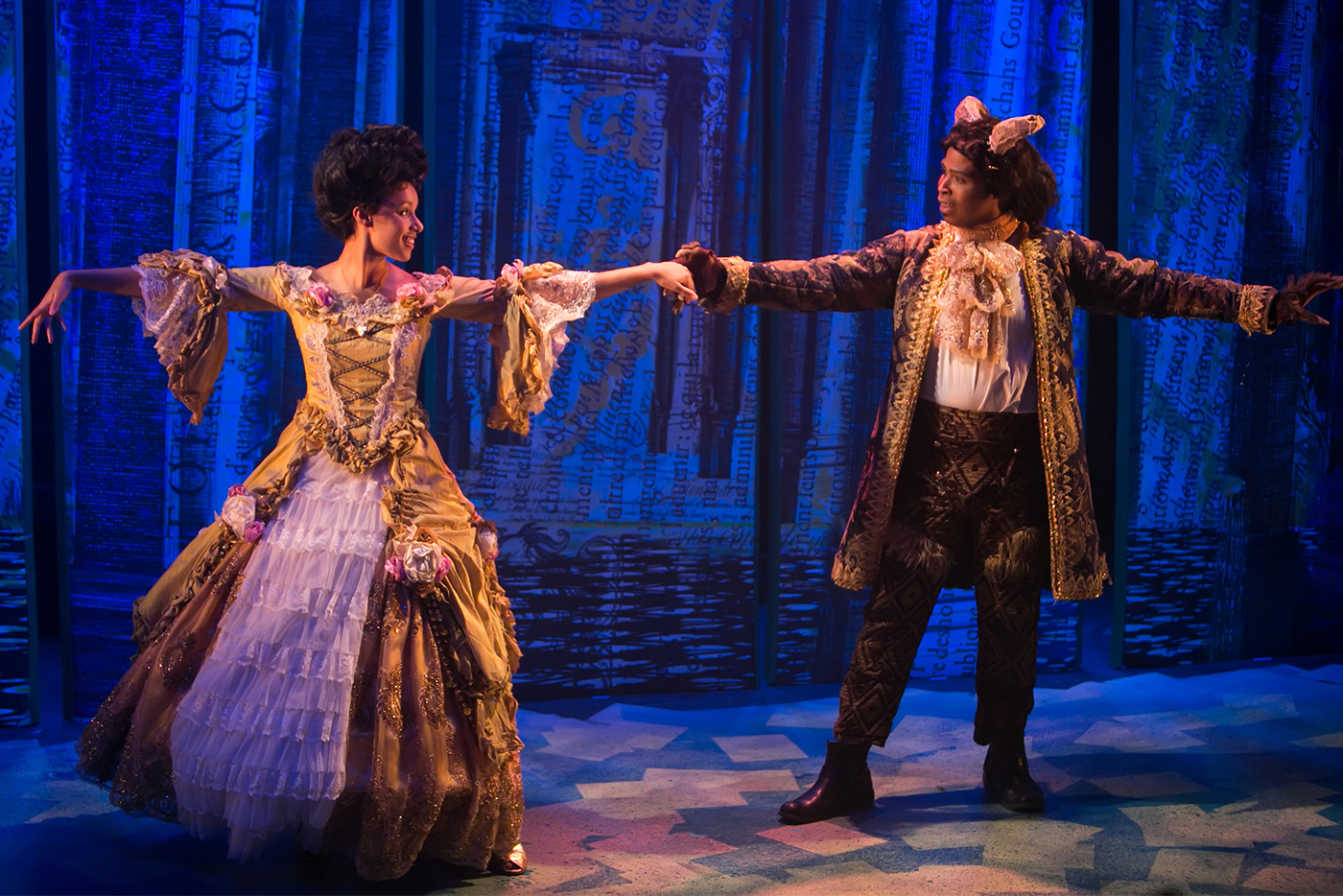 Caroline Strang shines as Belle in Redhouse’s “Beauty and the Beast.”

Once upon a time everybody thought the story of Beauty and the Beast was French. Most versions of the story anyone reads are taken from Jeanne-Marie Leprince de Beaumont’s very long text of 1740. Her retelling has deep ancient roots, going back possibly thousands of years, with several antecedents in classical mythology.

The story is fraught with meaning that has long kept it popular. But forget most of that. In 1991 the Walt Disney company produced a musical version that became the first animated feature to be nominated for an Academy Award. That has made all the difference.

When the 1994 Disney stage version is produced today, we know going in that all the original Leprince de Beaumont trappings, like the rose symbolism, will still be at the core of the drama. Because “Belle” means “beauty” in French, any actress taking the role must pass a stringent looks-and-vocals test.

For the Redhouse Arts Center’s sellout engagement, Caroline Strang, a young Equity player up from North Carolina, is indeed fair of face and brings extensive musical credits, including Stephen Sondheim. She’s in her glory with the score by Alan Menken, Howard Ashman and Tim Rice, starting with the first act’s numbers about herself. She moves like a dancer and displays a quick sense of humor.

Temar Underwood, an Equity player from Manhattan, has been a Redhouse favorite going back to Odysseus DOA. His body set and facial expressions, along with Katharine Tarkulich’s costumes, make him look like someone to run from in the first act, but by the time we get to his baritone in “How Long Must This Go On?” and “If I Love Her,” we know there’s a prince looming in the chrysalis. His culmination is the love duet, “Transformation,” near the end of the second act. All of that goes most affectingly.

That means veteran director Patrick Burns, last seen as the filmmaker in last spring’s Ragtime, must spend all his energy on the Disney accoutrements, the talking-singing household implements and the ensemble of dancing knives and forks. The effort is well-invested. Almost everyone other than the lovers provides endless fun.

Tops among these is an athletic newcomer from New York City named Cameron Smith as Gaston, the rejected bully suitor of Belle. As written, Gaston is a caricature of a self-obsessed, hyper-masculine blockhead. It’s not a role calling for subtlety. Of course, Belle has to be disgusted by Gaston’s excesses, but Smith’s exuberance — once leaping up a yard backward to find a seat on a bar — allow him to steal almost every scene he’s in.

Around the Beast’s castle we find a cast of vaudevillians passing themselves off as household implements. The creature in charge is the tightly wound mantle clock (there’s a wind key in his back) named Cogsworth (Steve Hayes). In other productions Cogsworth is played as Arthur Treacher, one of Hollywood’s stock Englishmen a generation ago, a gag lost on contemporary audiences. Hayes, a New York City Equity player often seen at the Redhouse, sees him as a sputtering Bert Lahr with a British accent.

Opposite him is Lumiere (Jason Timothy), the maître d’ of the castle, a candelabra who talks exactly like Maurice Chevalier. Timothy, a familiar face at the Redhouse (Ragtime), has never been better.

The two women in the household are Babette (Cathy Butler), a feather duster. She’s the saucy maid of the castle who’s likely to catch Lumiere’s eye. Holding more sway is the cook, Mrs. Potts (Kathy Burke Egloff), whose extended arm impersonates a teapot. One of the hardest-working players in community theater, Egloff stepped up to a bigger role in September’s Avenue Q. Her Mrs. Potts has much musical responsibility here, as she delivers the title song with elegance and affect. Her young son, Chip (Alex Bronchetti), is a teacup.

One more household object is allowed theft of scenes, and that’s the wardrobe, Madame de la Grande Bouche (Janet Engle). Most of the audience can translate her name as “big mouth,” but Engle’s witty delivery is pointed and delicate rather than broad.

Tim Brown’s scenic designs include rotating panels that take us from indoors to outdoors with the turn of a flange. Brittany Jenkins’ choreography moves all the Disney magic in a small space. And music director Jacob Carll leads an ensemble of 10 players through a score that will stay with audiences through the holidays.