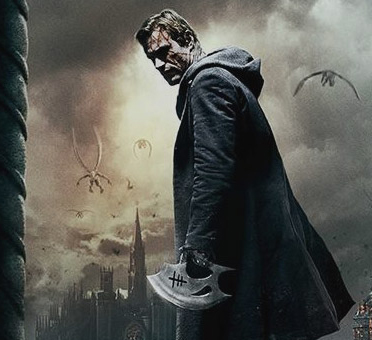 Imagine a guy walking around these days with a zipper on his neck.

With the opening this weekend of of “I, Frankenstein,” Aaron Eckart plays the title monster placed in the present. The trailer reveals a quicker-moving model than the original laboratory creation. And this Frankie — Adam is the name, actually, and the creator is Victor Frankenstein — is tasked with saving mankind by getting thrust into the middle of a centuries-old war between two clans that will never die.

Eckhart appears as Adam with scars on way more than his neck, by the way.

Bill Nighy, Miranda Otto and Yvonne Strahovski also star in the tale that has a deep connection to the makers of the very dark “Underworld.” You may remember Strahovski from the small screen, where she played the undercover girlfriend of lovable regular-guy-spy Chuck. (I miss “Chuck.”)

The story is taken from the graphic novel written by Kevin Grevioux. It was directed and written by Stewart Beattie.

Also opening this weekend is “Jai Ho,” the Hindi-language action drama that’s reported to be a remake of the Telugu picture “Stalin.”

The Indian feature was directed and produced by Sohail Khan. It stars Salman Khan and Daisy Shah.

At the center of the “Jai Ho” story is a nationwide movement to pay it forward. This chain is in the power of three. Everybody who gets a good deed must do another for three people. Before you know it …

Last weekend was a very good one for four opening films.

New movies took spots one, three, four and seven in the top-gross list, according to boxofficemojo.com.

Topping the list was the Kevin Hart-Ice Cube cop comedy “Ride Along,” which took No. 1 with a weekend haul of $41.51 million.

For more Film News & Reviews like “OPENING FILMS: A Frankenstein for today and a Hindi pay-it-forward” – CLICK HERE