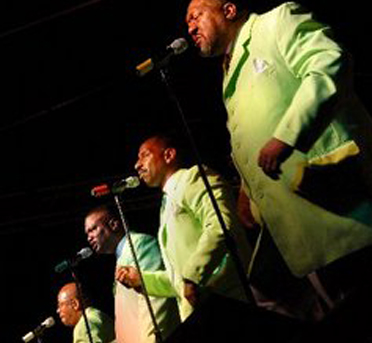 In the late 1990s, U.A.D., featuring four-part rhythm’n’blues harmonies with a focus on the Motown sound, established a tradition of Valentine’s Day concerts, eventually expanding to include Mother’s Day. Five years ago, however, with Larry Mathis, the group’s leader, spending time developing a second performance group, the tradition faded.

“We grew up on romance,” Mathis recalls now. “Back in the 1970s, me and Ike Wynn {a U.A.D. original, now Mathis’ partner in the group’s production} used to go to a club called The Place on Tallman and South Avenue. We were mesmerized by these groups that came through and just personified romance. We want to bring that back. We especially want to bring it to the younger generation.”

To launch the comeback, U.A.D.–the initials signifying Uplites, Avatar and Destiny, bands Mathis and Wynn sang with back in the day–will host a concert at the City Hall Atrium, 223 E. Washington St., on Friday, Feb. 14, 7 to 11 p.m. As an opening act, Mathis has signed Soul Mine, a band led by former U.A.D. singer Rick Linzy. Returning to their tradition, roses will be handed out to the first 35 female attendees. Also in tradition, U.A.D. will be outfitted in matching attire from Bergan’s Urban Fashions. Capacity at the Atrium is 140, so tickets are advance-sale only, and are available for $20 at Bergan’s, 323 S. Salina St., or by calling 882-4888.

“For us, Motown is endless music that tells stories,” Mathis reflects. “The stories have meaning as far as how to treat someone, how to be as a person. It reminds us of the doo-wop days, when there was community, when everybody was on the corner singing.”

With memories of opening for such headliners as Brass Construction and Crown Heights Affair, Mathis wants the Valentine performance to put the local music scene on notice that U.A.D. is back, ready and deserving of inclusion on the annual civic playbills from Juneteenth to Taste of Syracuse. And to show that the comeback is more than a one-shot deal, Mathis has booked Eastwood’s Palace Theatre for a May 17 gig, and signed the equally soulful Billionaires as opening act.