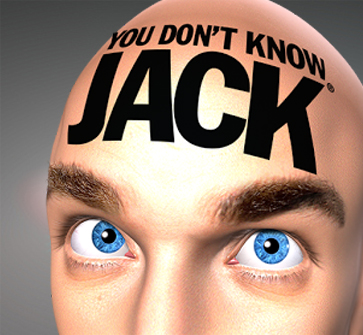 My son has reintroduced me to a game I played on my Macintosh Performa before he was born: “You Don’t Know Jack.” The irreverent game, based on American culture, was a riot on PC, and it’s even better on mobile devices.

“You Don’t Know Jack” comes in two mobile versions. One is a smartphone-only version – available for iOS and recently released for Android – that lets you play “Words with Friends” style against your friends or even strangers. You sign in with your Facebook account, but the number of games are limited in the free version. You can buy tokens, of course, but that costs real money.

I played “You Don’t Know Jack Party,” which is more like a game show and like the original game that debuted in 1995. In this version, which is available only for iOS, you install the game on an iPad or an Apple TV and use your iPhones as controllers.

However, if you use an iPad as the game screen, you need to download the free JackPad app on your other devices so they can function as controllers.

New Games Due This Month
Good Piracy?
To Top