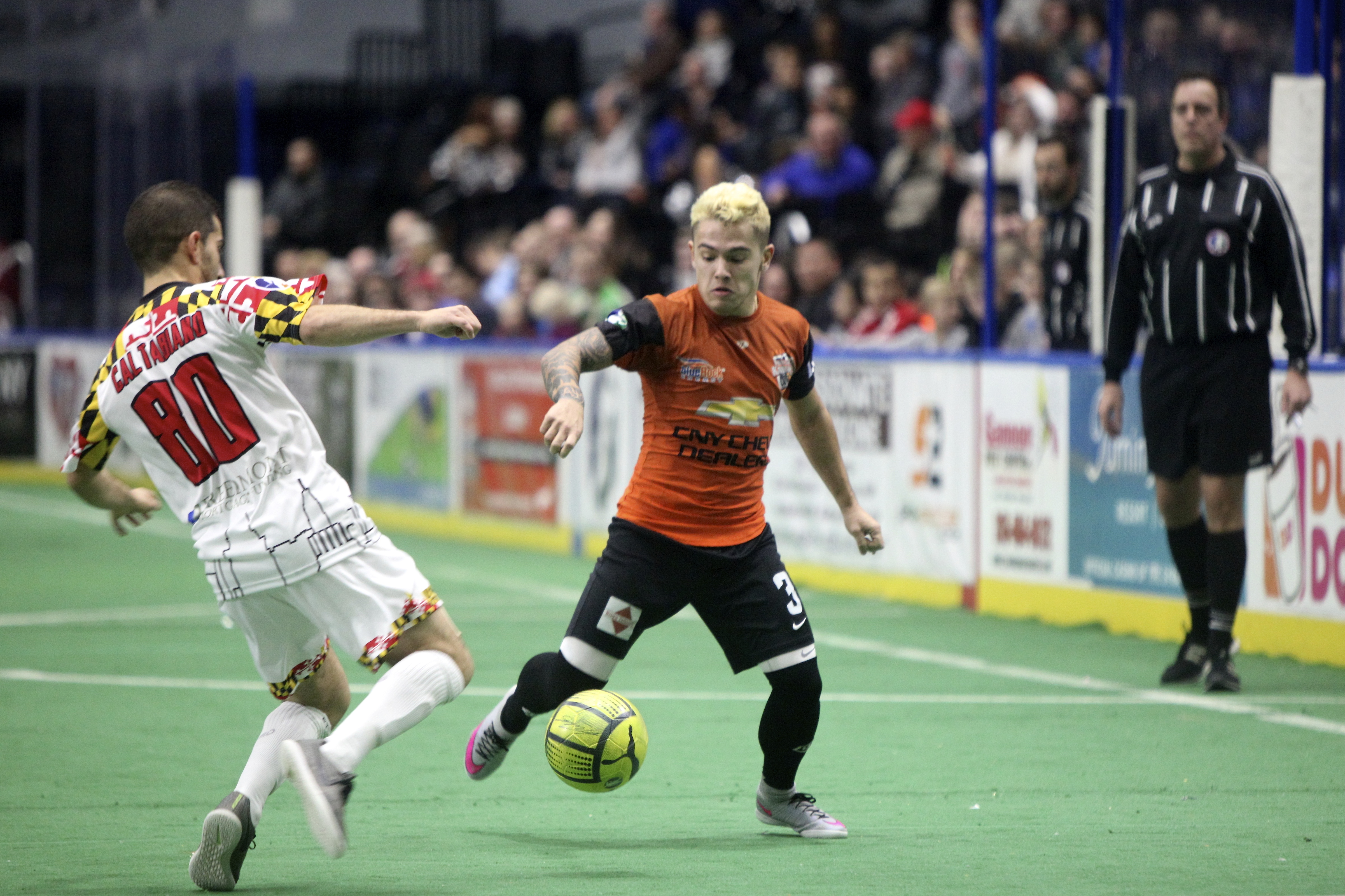 It’s a Saturday morning in the CNY Family Sports Centre on Jones Road, home of the Syracuse Silver Knights professional soccer team. Men in a variety of collegiate and club T-shirts with neon-colored practice jerseys draped over them are sprinting all over the field. Between the soft thumps of a soccer ball being kicked, a faint hum can be heard from the whirring fan blades overhead. The occasional shout for a teammate interrupts what otherwise is a very rhythmic and peaceful environment.

The buzzer from the shot clock sounds and a whistle from the coach quickly follows. The day of combine drilling is over. Once everyone is dismissed, small clusters of groups form across the field. Many discuss their future roles with the team. The roster is not yet finalized, but one thing is certain: The outlook for the Syracuse Silver Knights’ seventh season is optimistic.

Last season the Knights missed the playoffs with a record of eight wins and 12 losses. “We had a disappointing season last year and our win-loss record was poor as well,” admitted general manager Tommy Tanner. “We lost eight games by one goal and a lot of them we had the lead going into the fourth quarter.” Tanner said nine players have signed contracts that have been approved by the MASL. Confirmed signings include Darren Toby, Jake Schindler, Joey Tavernese and Kenardo Forbes. Head coach Ryan Hall said last year’s captain Bozidar Jelovac has also signed with the team, a defensive centerpiece who contributed 7 goals and 6 assists in the 2016-2017 season.

“We have a lot of young, talented guys and that’s kind of what we want,” Hall said. “Mix that with our older veterans and you get a good, cohesive, blue-collar team.” Schindler is a proven player who has been key on defense the past two seasons for the Silver Knights. Tavernese was the club’s leading scorer last season with 26 goals and also managed eight assists, while Forbes led the team in assists with 21 and netted 21 goals as well. And there’s also fan-favorite Toby, the Trinidad and Tobago native who has played for the Silver Knights for the past six seasons.

Other signings include midfielders Patrick Thompson and Ben Ramin, both returning for their second season with the Silver Knights. Joining the ranks for the first time is Logan Roberts, a local who played at Binghamton University. “We’ve actually lost two dominant players from our team last year, Antonio Manfut and Moises Gonzalez,” Hall said. “They both went to the same team down in Rio Grande Valley in Texas, so those are two big shoes that have to be filled.”

Manfut had a whopping 21 goals and nine assists for the Silver Knights last season. Gonzalez had a very similar and respectable stat line with 15 goals and nine assists. The pair were involved in nearly 40 percent of the team’s 137 goals scored last season. To fill those spots, Hall said the team has begun looking north of the border, in territory where the Silver Knights have never recruited before. Three Canadians who “are of a high level” are trying out for the team. “A lot of teams head south (in search of talent) in Mexico and Brazil,” Hall said, “but Canada is producing a tremendous amount of futsal and indoor players. We found some really quality players that we’re excited about.”

There were also several Syracuse University players that were drafted by Major League Soccer teams who were present at the combine. Nick Bibbs and Liam Callahan were two of the standouts that have since signed. Andrew Coughlin, a Baldwinsville native, has established himself as the first-team goalkeeper who played in 15 of the 20 games last season. Tanner confirmed Coughlin is a lock for the season.

Coughlin played at SU for his first two years and transferred to Canisius College for his final two. He was given his first shot to play for the Silver Knights during the 2015-2016 season when both veteran Bryan O’Quinn and backup keeper Matt Perrella were out with injuries. “Last year I came back and we didn’t get the results we needed, but it’s fun to play and I don’t think there’s a better job than to get paid to play soccer,” Coughlin said.

“That’s why I’m back this year. I’m hoping to bring a trophy to Syracuse if we can and I think we have some players here that have changed things up a little bit, so I’m really excited for the season.” The Silver Knights face a tough opening schedule for the 2017-2018 season, with two road games in California against the Turlock Express on Friday, Nov. 3, and the San Diego Sockers on Sunday, Nov. 5.

“It’s always tough going away from home and trying to get results, especially at a place like San Diego, which is one of the storied MASL (Major Arena Soccer League) teams,” Coughlin said. “Road trips also build camaraderie with spending so much time with your teammates. It’s definitely fun to go and travel with the guys.”

Syracuse will have two additional games this year, bringing the regular season to 22 games, which was implemented by the MASL for the upcoming campaign. The Knights will have their fair share of traveling the first half of the season, with seven of their first 11 games on the road.  “If we can come out of that road stretch at least at .500 and then head into our long string of home games, we’ll be in good shape,” Hall said.

The Baltimore Blast is as strong as ever after coming off a championship-winning season. “Baltimore is always at the top of the table and they stay pretty consistent, usually adding only one or two players every year,” Hall said. “For the most part it’s everybody else trying to catch up with them.”
Coughlin recently viewed footage from a home game against the Baltimore Blast last season in preparation for this year. He believes the Silver Knights have the potential to hang with the strongest teams in the league.

“For three quarters of the game, we were the better team,” Coughlin said. “Baltimore didn’t have a lead in that game until the very end, so it just shows that we can compete with the best. Now we just have to make sure that every time we show up it’s business. If we approach every game like it’s a championship and we play with our hearts on our sleeves, we can show the fans, show everybody, that we’re a team that can compete for a title.”

The rest of the Eastern Division only got tougher for the Silver Knights, however, with the Harrisburg Heat and Florida Tropics making several important acquisitions in the off-season. Harrisburg brought in several foreign players who are expected to make some noise this year. And Florida signed striker Mauricio Salles who previously played for the Rochester Lancers and has a record of being a dominant indoor soccer player.  “I’m a little bit biased, but I think, bar none, the Eastern Division is top to bottom the hardest in the league,” Hall said.