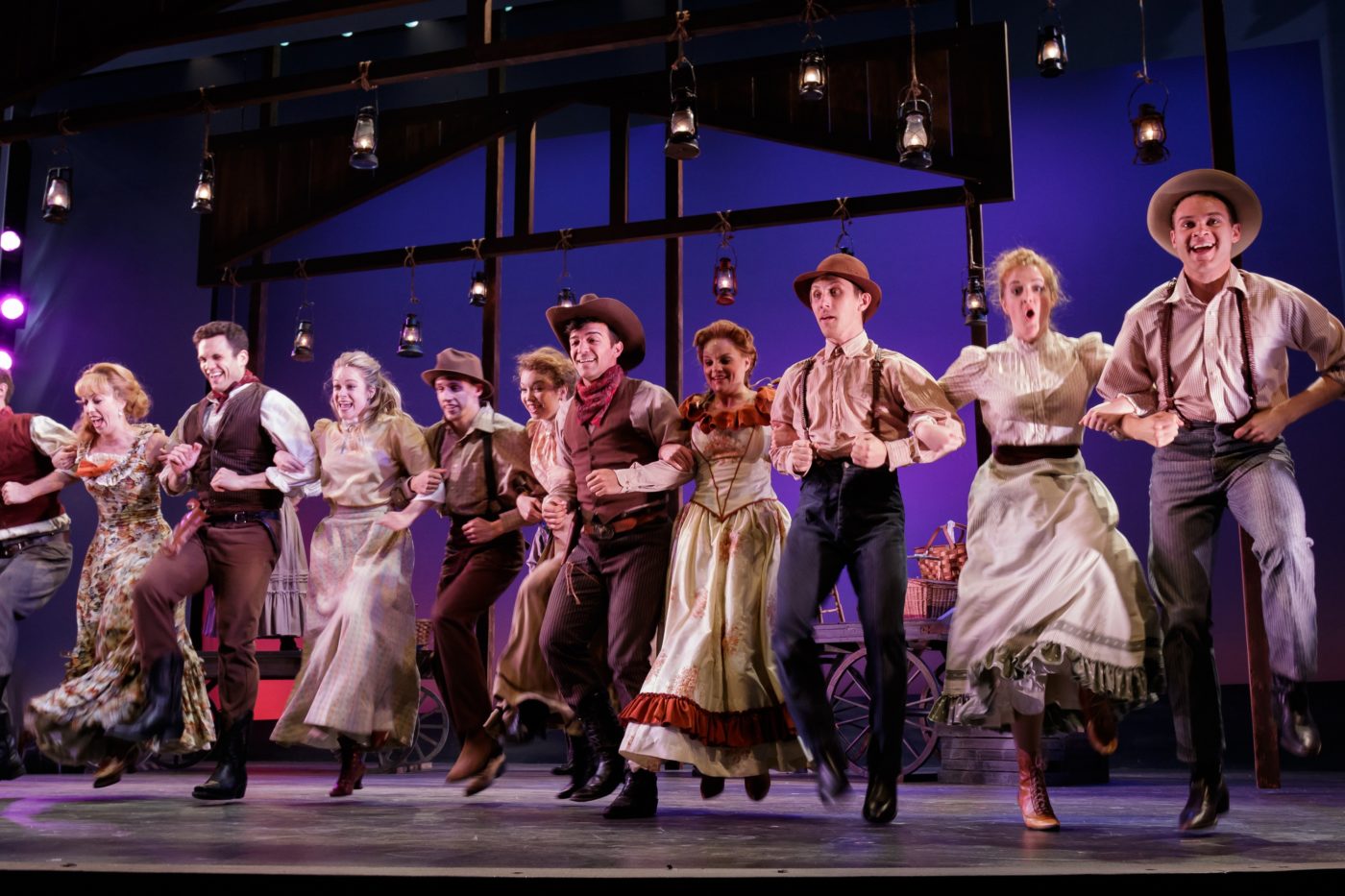 Merry-Go-Round Playhouse’s “Oklahoma!” proves the musical continues to be an enjoyable sing-a-long and foot-stomping good time.

No director undertakes a revival of Oklahoma! lightly. The Richard Rodgers-Oscar Hammerstein golden-age oldie might be the most familiar of all American musicals, but it also broke the moldy mold and changed the shape of the form forever.

To take us back to what made the 1943 production revolutionary, director-choreographer Jen Waldman has applied what might be called an originalist approach for the season opener at Auburn‘s Merry-Go-Round Playhouse (running through Wednesday, June 22). Scenic designer David Arsenault’s spare open set evokes not only the plains but also the rigors of wartime austerity. And Waldman’s leads are multi-taskers. If this is the show that integrates narrative, music and dance, her leads must excel at them all.

Critics and historians have long recognized that World War II, then going badly, is a palpable offstage presence. There was a shortage of funding as well as able-bodied men. The heady optimism of the opening number, “Oh, What a Beautiful Mornin’,” is presented on a nearly bare stage with just a small slice of Aunt Eller’s white clapboard house. Baritone Curly (Stephen Mark Lukas) is both assertive and defiant. Oklahoma had just endured both the Depression and the Dust Bowl, and impoverished Okies were fleeing. What we are about to see will upturn all that.

Not that this is a low-cost production. David Arsenault’s mobile set allows for the instant construction of the dingy Smoke House, where the outcast Jud Fry (Denis Lambert) puts up naughty pictures. This is also one of the rare productions in which the company produces an actual surrey with the fringe on top — including the isinglass curtains, perfectly meeting Hammerstein’s lyrics — before the final curtain. The celebrated modernity of Oklahoma! rests on the coordination of character and plot to music and the integration of the dance numbers. In this production, as rarely happens these days, the leads Curly and Laurey (Lindsey Bliven) display their musical excellence and pert repartee but also take on the four-part Dream Sequence that ends the first act. Choreographer Agnes de Mille’s landmark innovation almost stands as drama by itself and indeed is more affecting when we see the same faces in both.

Despite the significance of the show in the development of the dance musical, there are not as many dance numbers as in later examples of the genre, like West Side Story or 42nd Street. The first important one comes with the male chorus in the novelty number, “Kansas City,” where everything’s up to date. As familiar as this may have become in 73 years, it’s still startling to see husky-looking men sashaying in modern dance routines while wearing cowboy boots.

Musically, Oklahoma! is not as folksy as audiences sometimes assume, despite the second-act opener “The Farmer and the Cowman,” and the conspicuous non-standard grammar and rounded-off -ings. Indeed, some musical numbers put operatic demands on voices, such as Curly and Laurey’s prime duet, “People Will Say We’re in Love.” Both Bliven and Lukas are superlative, expressive singers with the discipline to take on Puccini as easily as Richard Rodgers. Bliven’s soprano sparkles in the operetta-like lyricism of “Many A New Day,” a number that could have been written a generation earlier.

Goddard is shorter and hotter-tempered than other Annies, more a firecracker than a sexpot, despite her ability to encircle a male body with her legs in one flying leap. Her “I Cain’t Say No” has to stop the show, and it does. As Will, Lindgren brings the presence of vocal qualities of a leading man rather than a supporting player, and gets the maximum out of his lines.

The only cast member wearing a business suit and at ease in the cash economy is articulate peddler Ali Hakim (Matt Ban). He’s supposed to be Persian, but Ban plays him with hints of Sacha Baron Cohen. Program notes inform that Ban sang the role of Curly in a high school production, so he knows all the show’s secrets. His solo, “It’s a Scandal, It’s an Outrage,” often deleted in other productions, is a standout.

This is a tight, bright Oklahoma! without a slack moment that sheds its age by returning to the original model.