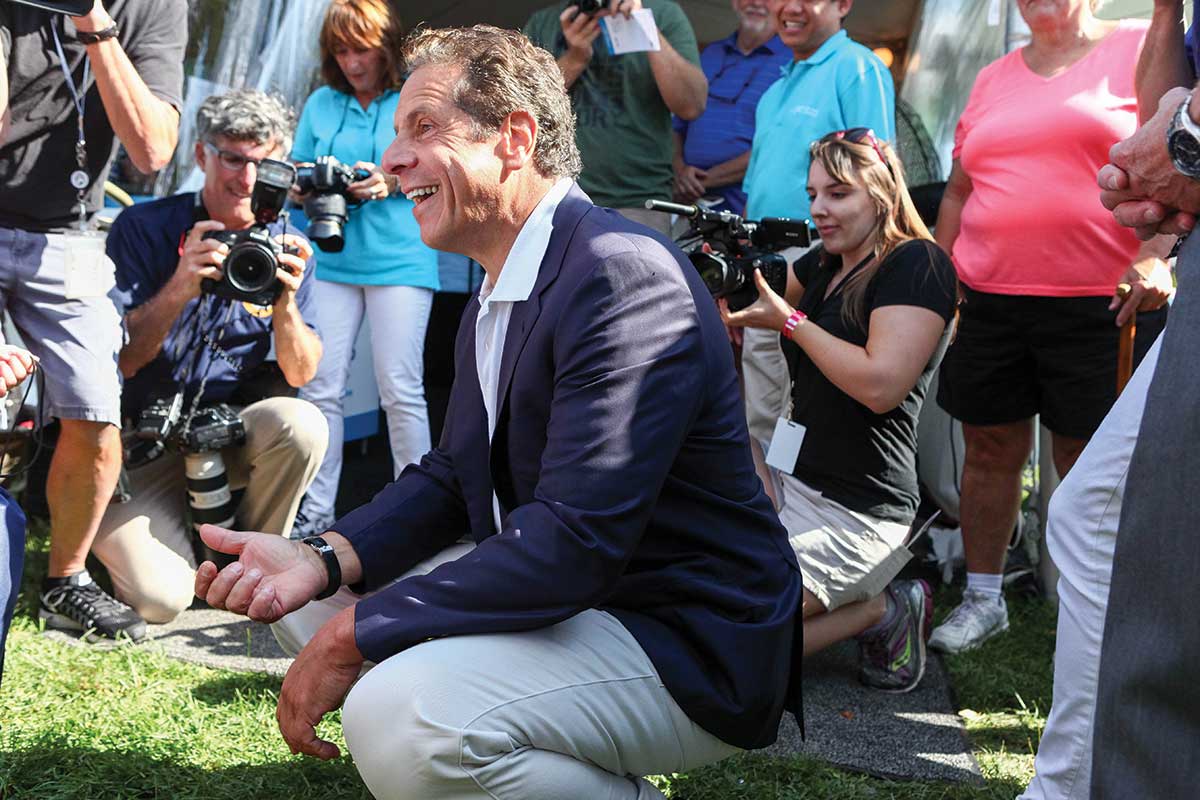 The disagreement on the Amazon deal seems like the first time in a long time that the Legislature has flexed its muscle as a co-equal branch of government.

For the state Senate to oppose Amazon was governmental malpractice,” Gov. Andrew Cuomo stated on Feb. 8. “You’re not there to play politics. You’re there to do what’s right for the people of the State of New York. And what they did here was wrong.” Michael Davis photo
Share
Tweet
Share
Share
Email
Comments

Gov. Andrew Cuomo has had a very good month. With a new Democratic majority in both chambers of the New York state Legislature operating at breakneck speed, he has been able to sign off on a flurry of progressive bills that he has wanted for years, from codifying Roe vs. Wade into state law, to providing financial assistance to illegal immigrants, to extending the statute of limitations for child sex abuse victims.

This honeymoon phase hit a serious roadblock last week, however, when it came to one of Cuomo’s most touted accomplishments of 2018: the deal to build half of Amazon’s second headquarters in New York City.

In an incredible signal of defiance, state Senate Majority Leader Andrea Stewart-Cousins decided to name Sen. Michael Gianaris to the Public Authorities Control Board, a panel that is not well known but may carry enough weight to sink the whole agreement with the internet retail giant.

Gianaris has been a fierce critic of the Amazon deal, which over the last two months has received backlash from both the most progressive liberals and traditional conservatives in state government. That’s because of the nearly $3 billion in tax breaks New York will be giving the company to build its facility in Queens.

“Our governments bend over backward to provide billions in benefits for the one corporation that needs it the least,” Gianaris said in December.

Gianaris’ position on the control board could prove decisive. Any member has the power to stop projects that come before it. And the board has sank other major deals in the recent past, including one for a new stadium in Manhattan under Mayor Michael Bloomberg’s administration.

That’s not to say Cuomo is powerless. Far from it. He must first approve Gianaris to the board. And even if he does and the board ultimately votes to stop the deal, Cuomo can veto their decision.

But this seems like the first time in a long time that the Legislature has flexed its muscle as a co-equal branch of government. And boy, is it ever nice to see.

Until January, Cuomo had presided over a divided Legislature for his entire eight-year tenure, usually keeping in line with his fellow Democrats against a common opponent in the Republican-controlled Senate.

Now there is no Republican chamber to stop Cuomo from doing what he wants to do. But that doesn’t mean Democrats should be willing to bow to his every command.

And why should they? The Child Victims Act, the Dream Act and other laws like it have been extremely popular in Democratic circles, but there are many Democrats who have had a lot of reservations about the state’s agreement with Amazon. Offering almost $3 billion in tax giveaways to the richest company in the world in the same year where the state suddenly suffers a $2.3 billion budget deficit should make most of us uneasy.

Add in the facts that this deal with Amazon was made in secret with little or no public input, and that Cuomo used a state development process in order to crush opposition from the city. It’s no wonder that the Legislature decided to wield their power and pump the breaks on Cuomo’s Amazon wish list.

It’s a nice signal to Cuomo, a proven micromanager who knows how to use his authority to get what he wants, that the Legislature should make more use of. All too often in the recent past, its members seemed to follow Cuomo’s marching orders even when they disagreed with him.

Last year, Cuomo once again vetoed a bill that would offer a better retirement plan to corrections officers who work in county jails. That was the third year in a row that the bill received almost unanimous bipartisan support in the Legislature. It passed the Assembly, 141–2, and the Senate, 61–0.

Cuomo says every time that the measure should be negotiated into the state budget, which is his usual scapegoat because he holds a heavy hand when hacking out the state’s finances. Then the Legislature surrenders to that notion, as lawmakers shrug and say they’ll try again next year.

If they think the bill is important enough to bring to the floor every year with such huge support, they should at least consider overriding the governor’s veto. They definitely have the votes for it but never seem to have the guts to act without his permission.

Thankfully, Sen. Stewart-Cousins believed that the stakes of the massive Amazon agreement were too great for New York taxpayers for Cuomo to act alone without any kind of oversight.

It’s not about sending Gianaris in there just to disrupt the entire process. It’s about having a crucial voice in the room that is not an automatic “yes man” to Cuomo. As Stewart-Cousins wrote in a letter, Sen. Gianaris “will bring an important perspective and accountability to this board as it reviews numerous projects.”

That voice is something Cuomo is not used to, but maybe he better get used to it. His party may have the majority in Albany, but that still doesn’t mean he has total control.