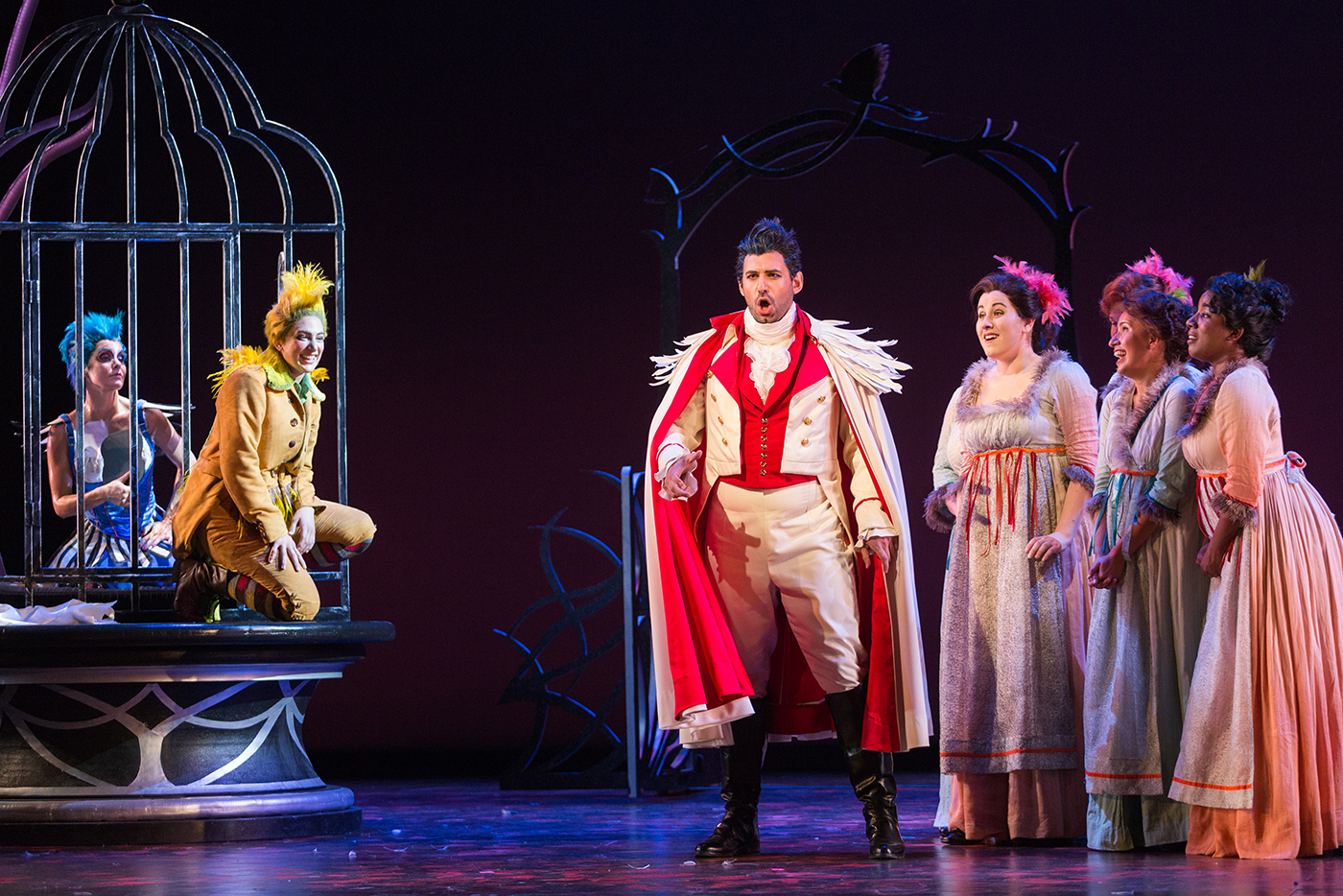 The Glimmerglass Festival’s 41st season continues its repertory slate with “The Thieving Magpie.”

Along with being one of upstate New York’s choicest arts destinations, the Glimmerglass Festival of Cooperstown can be expected to make news.

Belying the canard that opera fans are stodgy and risk-averse, the summertime company has dug up a work that many have heard of but almost never actually heard: Gioachino Rossini’s The Thieving Magpie (La Gazza Ladra). It also takes on Sweeney Todd: The Demon Barber of Fleet Street, one of the most popular of Stephen Sondheim’s shows (and near-operas) and presents it in a startling new adaptation to make you rethink the music even more than the gore.

With its distinctive snare drum rolls, the Overture to The Thieving Magpie has been borrowed so often, as by director Stanley Kubrick for A Clockwork Orange, many will recognize it even if they can’t name it. The two-and-a-half-hour Magpie is 199 years old, and it takes some explaining why the full Italian text should be making its North American premiere only now in Cooperstown. Although a little-seen English version was performed in the Bronx a few years ago, this is the one that makes waves. The score is a winner, chock-full of the delights that make Rossini a composer for the many rather than the few.

The problem instead appears to be audience perception of Giovanni Gherardini’s libretto, or book. Rossini’s name is rightly associated with comedy, sometimes salty as in Italian Girl in Algiers. Given that Magpie’s title suggests a folktale, audiences have sometimes been taken aback by the dark motifs at the center: a disgraced father, an innocent servant girl sentenced to death, and a sordid love triangle in which a brutal authority figure tries to split apart two young lovers, reminiscent of Tristan und Isolde. This is what Italians call opera semi-seria, or “half serious,” which we don’t see very often.

We begin with an endangered class-crossing romance. Drop-dead gorgeous servant Ninetta (soprano Rachele Gilmore) is in love with the well-born son of the household heir, Giannetto (tenor Michele Angelini), who is just returning from the wars. Nearly everyone is tickled by the match, except for the scowling mother Lucia (mezzo Leah Hawkins), who accuses the girl of theft when a silver fork is reported missing. Absurd as it may sound, theft by a servant brought the death penalty, an outrageous travesty of justice that persisted until just before Magpie premiered.

The basso villain appears in the form of the Mayor (Musa Ngqungwana) making three threats: 1. He wants to seduce Ninetta before Giannetto gets home; 2. Find and execute Ninetta’s father Fernando (baritone Dale Travis), accused of desertion; 3. Take charge of Ninetta’s execution for theft but let her off if she submits to his lust.

Not to worry. Despite the momentary dread, this is a rescue opera. And the Magpie of the title, a curvaceous, non-singing avian (Meg Gillentine), saves everyone’s day.

The chance to hear Rossini in top form, rescued from silence by conductor Joseph Coloneri and stage director Peter Kazaras, means that Thieving Magpie is one of the most compelling productions anywhere this summer. The one aria known during the opera’s neglect is Ninetta’s prayer, “Deh, tu reggi in tal momento,” gaining in resonance from its dramatic position, and the high point of the revival.

Other riveting moments include the second-act duet between Ninetta and the bird-like household servant Pippo (Allegra De Vita in a breeches role). Impressive in every note is South African-born Musa Ngqungwana as the Mayor. He supplies the required electricity in this peculiar libretto.

This rich production, awash with visual wit, reminds us we are still with sunny Rossini, such as the comic peddler Isacco (Brad Raymond). Myung Hee Cho’s art nouveau proscenium, evocative of designer Hector Guimard, helps define a continuing tone. Her surprising costumes conjure up the ghost of Max Schreck from the silent film Nosferatu for a crowd scene.

A retreat from gore seems to be the intent of Christopher Alden’s audacious restaging of Stephen Sondheim’s Sweeney Todd. New York City-based Alden is a frequent guest director, whose characteristically bold stagings prompt the audience to re-examine the entire artistic property.

This Sweeney opens on a bare stage, which might be a church hall in a rural English town. The entire cast is dressed in what pass for street clothes from a few decades past. They will take on costumes and assume characters before us. At first sight they tinkle spoon against saucer while miming eating. Instead of horror, this tease of Sweeney Todd’s most shocking theme, cannibalism, evokes not horror but an uneasy titter.

As we are no longer attending to Glimmerglass’ usual state-of-the-art production values, our attention shifts readily to what we hear. While the players are still in mufti, we can’t help but be startled by the vocal power they project. Thus, we hear their voices before we see what they’re wearing in different roles. Music dominates.

The battle, such as it was, whether Sweeney Todd should be considered so demanding and complex as to be classed as an opera has been long since won. Conductor John DeMain, whose notes refer to composer Sondheim as “Steve,” was a champion of the cause, leading the first production at Houston Grand Opera.

In those same notes, DeMain depicts himself as saying to the cast that if he hears them merely singing instead of communicating, they will be fired. It appears that no one was in any danger of leaving Cooperstown prematurely. Bass-baritone Greer Grimsley brings a thunderous presence to the title role. Not surprisingly, he has also sung the role of Baron Scarpia in Tosca, but here he expresses a wider range of emotion.

His light duet with Mrs. Lovett (soprano Luretta Bybee), on which victims provide the best meat pie stuffings, “A Little Priest,” comes off as something by Noel Coward, whereas it is often raucous elsewhere. In a rare visual indulgence, costumer Terese Wadden dresses the pair like the Cockney “Pearl People” seen in London parks generations ago.

Todd’s opposite number, the youthful and significantly named Anthony Hope (Harry Greenleaf), delivers the show’s best-known number “Johanna” with unashamed emotion. Unusual in any musical, many of the less attractive male characters are tenors, like brutish Beadle Bamford (Bille Bruley), or slimy rival Adolfo Pirelli (Christopher Bozeka). But then again, so is the admirable, plucky chap who exposes the entire outrage, Tobias Rogg (Nicholas Nestorak), and takes the brunt of its horrors.

The two sopranos could hardly make greater contrasts. Patricia Schuman as the beggar woman has the greater task, appearing as little more than a bag lady in much of the action. Director Alden’s minimalism, allowing us to see what a beauty she is before costuming, undercuts her. When she emerges in full glory at the end, however, she still has the impact.

Most impressive of all the Young Artists (i.e. not full professionals) is Emily Pogorelc as the imprisoned virgin Johanna. Her “Green Finch and Linnet Bird” is one of the supreme moments of the opera.

In the end, director Alden’s post-modernism was worth trying once. It elevates some of the action, but diminishes the tension of Hugh Wheeler’s startling book. One is enough.

The festival takes place at the Alice Busch Opera Theater, a few miles north of Cooperstown on Route 80. It is about a 75-mile drive east from Syracuse on scenic Route 20. For ticket information, call (607) 547-2255 or visit Glimmerglass.org.