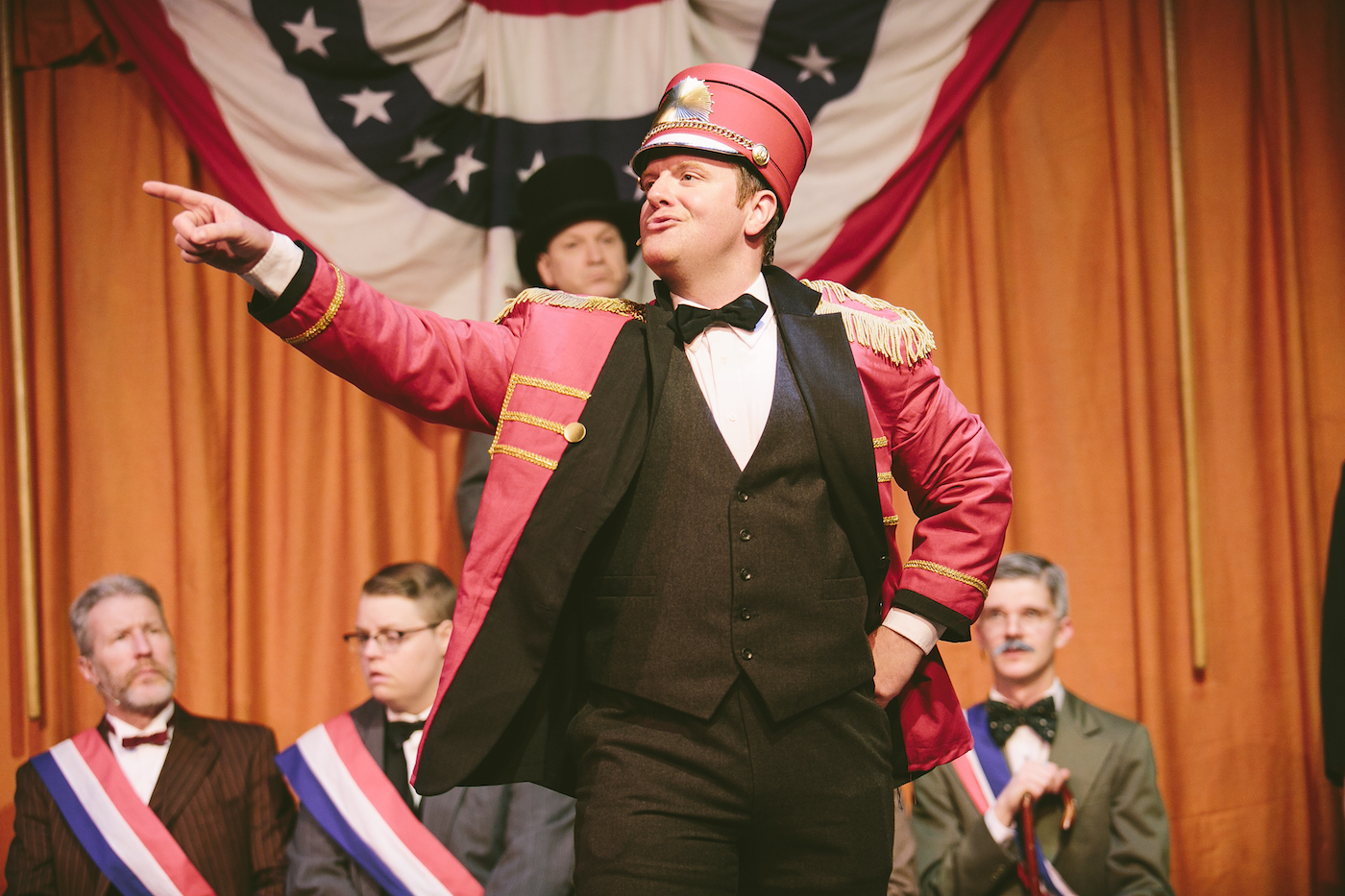 The years have been kind of Meredith Willson’s The Music Man, running through Feb. 4 at the Baldwinsville Theatre Guild. Fifty-eight years ago it beat out West Side Story for the Tony Award, still a bone of contention for demanding musical buffs. It satirizes small-town life from a century ago, just before America’s entry into World War I, and still it keeps on ticking.

Much credit goes, admittedly, to the golden score, with some of the most vibrant theatrical numbers ever produced: “Ya Got Trouble,” “76 Trombones,” “Shipoopie” and many more. In 2017, however, The Music Man poses a more penetrating question: America’s lack of resistance to glib charlatans. Consider, for example, the lure of the Wizard of Oz. Perhaps some recent political figures might also suggest themselves.

First-time director Henry Wilson is well-equipped to take advantage of BTG’s small stage in the Presbyterian Education Center. He was a heart-stopping Jean Valjean in the company’s Les Miserables and won his first Syracuse New Times Syracuse Area Live Theater (SALT) Award as the Doctor himself in Young Frankenstein on the same stage.

First of all, jokes tend to be funnier in tight places, a physical truth exploited by veteran player Dan Bostick as the stuffed-shirt blunderbuss Mayor Shinn. Similarly, the opening number “Rock Island,” set in a train passenger car, gains from intimacy. Traveling salesmen repeat syncopated prose poetry evoking the steam engine as they rock in their seats, never noticing that the notorious con artist Harold Hill is hidden in their midst.

Production numbers, of course, are a different matter. The nine-player orchestra, ably led by Colin Keating, sits just below sight lines, not really in a pit. Director Wilson and choreographer Ellen Ayer-Earley must keep the large cast, including scads of children, above the fray and downstage. Motion always moves toward the front. This tends to speed up the action, and indeed there is never anything approaching a lull in well over two hours.

Leading man Ben Sills brings national professional credits to this production, as well as having won a SALT Award for his Sweeney Todd on this same stage. He’s adept and light-footed with the rapid-fire lyrics, almost like a W.S. Gilbert patter song. As a blond guy with WASPish fine features, he’s prepared to impersonate an innocent, as when he goes Elmer Gantry in “Ya Got Trouble,” a self-serving denunciation of sin. His Mephistophelean side is slower to emerge, hardly a fault.

As the female romantic lead, Marian Paroo the Librarian, Maggie Dougherty meets even higher musical demands. She takes the lead in the duet, “Till There Was You,” the heartbreaker of the show and Meredith Willson’s greatest hit. She’s up for it and anticipates all the emotion in her earlier solo, “My White Night.”

Director Wilson and actress Dougherty earlier downplay Marian’s allure and make her convincingly frosty. This portrayal yields two benefits. First it explains that Marian had not been overlooked. Secondly, it underscores the moral dilemma at the center of the action: why she never betrays Harold when she knows the truth before anyone else.

With 37 players on stage, there are more excellent performances than can be cited. While the discipline required for barbershop quartets might have fallen out of fashion, Zack Thompson, Chris Wagner, Ben Borenstein and Brian Logee, four gents of visibly different generations, sound as though they had been preparing long before auditions for this production. Their contributions are much more than ornamental as their numbers, “Goodnight Ladies,” “It’s You,” and especially “Lida Rose,” are central in establishing the straw boater/pre-jazz tone of River City that composer Willson clearly loves even while he spoofs it.

In a program note director Henry Wilson reveals his own attachment to musical theater, when he sang the role of shy Winthrop Paroo, Marian’s awkward little brother, in a Phoenix, N.Y., high school production. One can guess what pressure this put on young Sam Denton, cast here in that role. Better as a bursting butterfly than a stumbly caterpillar, Denton goes to the head of the class with “The Wells Fargo Wagon” and “Gary, Indiana.”

The Music Man is a big show on a little stage that bursts with joy, 76 times over.

Redhouse Musical Revue Proves Finn Is In
Despite More Diversity, Are The Oscars Still Out of Touch?
To Top