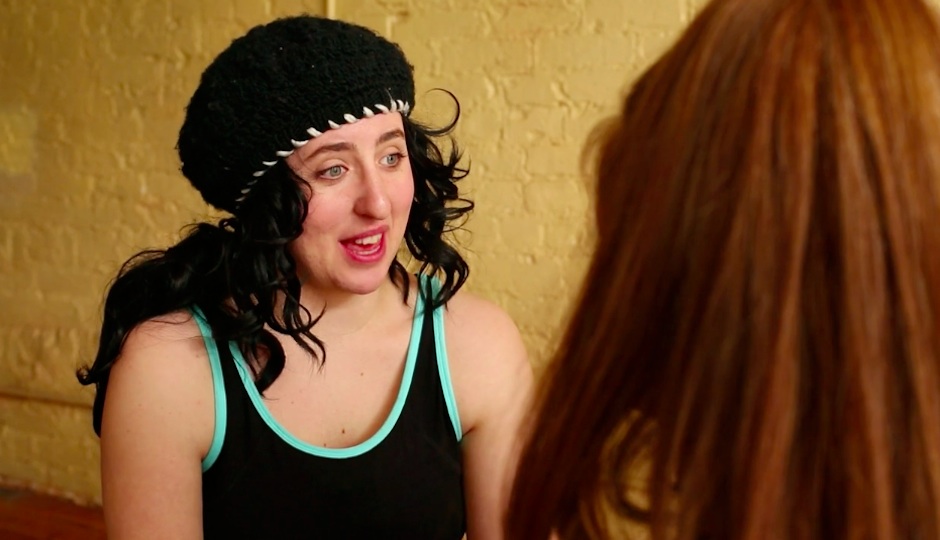 Monica Lewinsky is back! Again! A new web series—dubbed, simply, Monica by independent filmmaker Doran Max Hagay brings to life a 2001 New York magazine profile of Lewinsky’s life in Manhattan. Think of it as a reimagining of this put-upon paramour for the digital age.

The profile on which the series is based, “Monica Takes Manhattan” by Vanessa Grigoriadis, ran three years after the smoke had cleared. It painted Lewinsky as a flighty 27-year-old with a diffident acceptance of a fame she didn’t ask for, but sometimes benefits from enormously. She profits from the use of her celebrity (a phenomenon Grigoriadis calls “brand Monica”), and draws invites to many of New York’s swankiest parties. As recently as last week, Lewinsky, now 41, was grouped among the “corps d’elite” at the Vanity Fair Oscar After Party, and photographed alongside Oscar winners in famous portrait artist Mark Seliger’s Instagram studio.

In 2002, shortly after the original New York profile was released, Lewinsky agreed to take part in a documentary for HBO called Monica in Black and White. The focus of the documentary was an appearance at Cooper Union, where she sat cross-legged on the apron of a stage and answered curious but softball questions from an audience of mostly mild-mannered gawkers. She came across as sweet, embarrassed, self-reflective and entirely in charge of herself and her dignity. She seemed, well—normal.

The new web series paints Lewinsky (played by Lily Marotta) as something in between these two extremes of attention-seeker and reticent good girl. In the first two installments, she tries yoga and Magnolia cupcakes for the first time, and meets with her publicist to discuss the New York magazine profile and the documentary. Three years out, she is pulling away from the media and ready to remake herself. A la Broad City, the humor is awkward. Bizarre, maladroit moments linger—sometimes painfully, as when the yoga instructor beats on Monica’s chest in an effort to loosen her up; and sometimes poignantly, as when a stranger approaches her in the park and accuses her of ruining lives.

(Monica – Part One from Doron Max Hagay on Vimeo.)

The series comes at a time when the 41-year-old Lewinsky is trying yet again to reinvent herself—surprisingly, within the industry that made her a pariah: the media. After a failed handbag line, a series of failed television hosting gigs, a move to London to earn a master’s degree in social psychology, and a decade of silence, in June 2014, Lewinsky penned a column about her life for Vanity Fair. Had the Internet of the late nineties been what it is today, she says, she would have been a victim of the hateful meme machine, herself.

In October 2014, she officially took up a pitchfork against cyberbullying, styling herself as “patient zero” in the “shame game,” and saying that she hopes to help others in the grip of public humiliation. She joined Twitter, where her profile defines her as: “social activist. public speaker. contributor to vanity fair. knitter of things without sleeves.”

If I were to give this web series major significance and assign it some lofty ambitions, it would go something like this: Maybe—finally—a true picture of the girl in the blue dress is emerging. A normal woman, moving forward, finding her place. It may have taken twenty years, but it might be high time to start considering Monica Lewinsky the star of her own story, instead of the crux of Clinton’s.

But that doesn’t seem like the Monica creators’ goal at all. No, like the profile it was based on, the web series is much simpler: what did Monica Lewinsky’s life look like after “that whole thing”? Who was she? What did she do all day? The answer, according to Monica: she wandered around Manhattan and tried to plan her future. Is that much different than what most young Manhattanites are doing today? Maybe the sweeping statement wasn’t too far off—maybe Monica, the web series, can bring us just a little bit closer to Monica, the human.

The first two nugget-sized episodes (seven and six minutes, respectively) were released on February 23. The third and fourth will be available on Monday, March 2 and the last two on March 9.

Broad City, about two millenial stoners living in Manhattan, started off as a web series and now runs on Comedy Central. The original series is still up on their YouTube channel.

In Epic Rap Battles of History, celebrities and historical figures (er, rather, actors playing them) face off in rap duels to settle, once and for all, who is…better? Personal favorite: Martin Luther King, Jr. vs. Ghandi starring the hilarious Key & Peele.

Web Therapy, starring Lisa Kudrow, is about an Internet therapist who conducts her efficient sessions via webcam. Her patients are a cast of thousands. It was picked up by Showtime in 2011.

Dr. Horrible’s Sing-Along Blog is about a would-be superhero who really just wants to win over the pretty girl at the laundromat. The delightfully NSFW Neil’s Puppet Dreams, a collaboration with the Jim Henson Company, is about a man who dreams in puppets. Both star Neil Patrick Harris, and both will have you in stitches if you appreciate his brilliant dry wit.

Where to find your favorite Oscar winners and nominees on TV
ABC’s ‘American Crime’ is Sharp, Heavy Entertainment
To Top