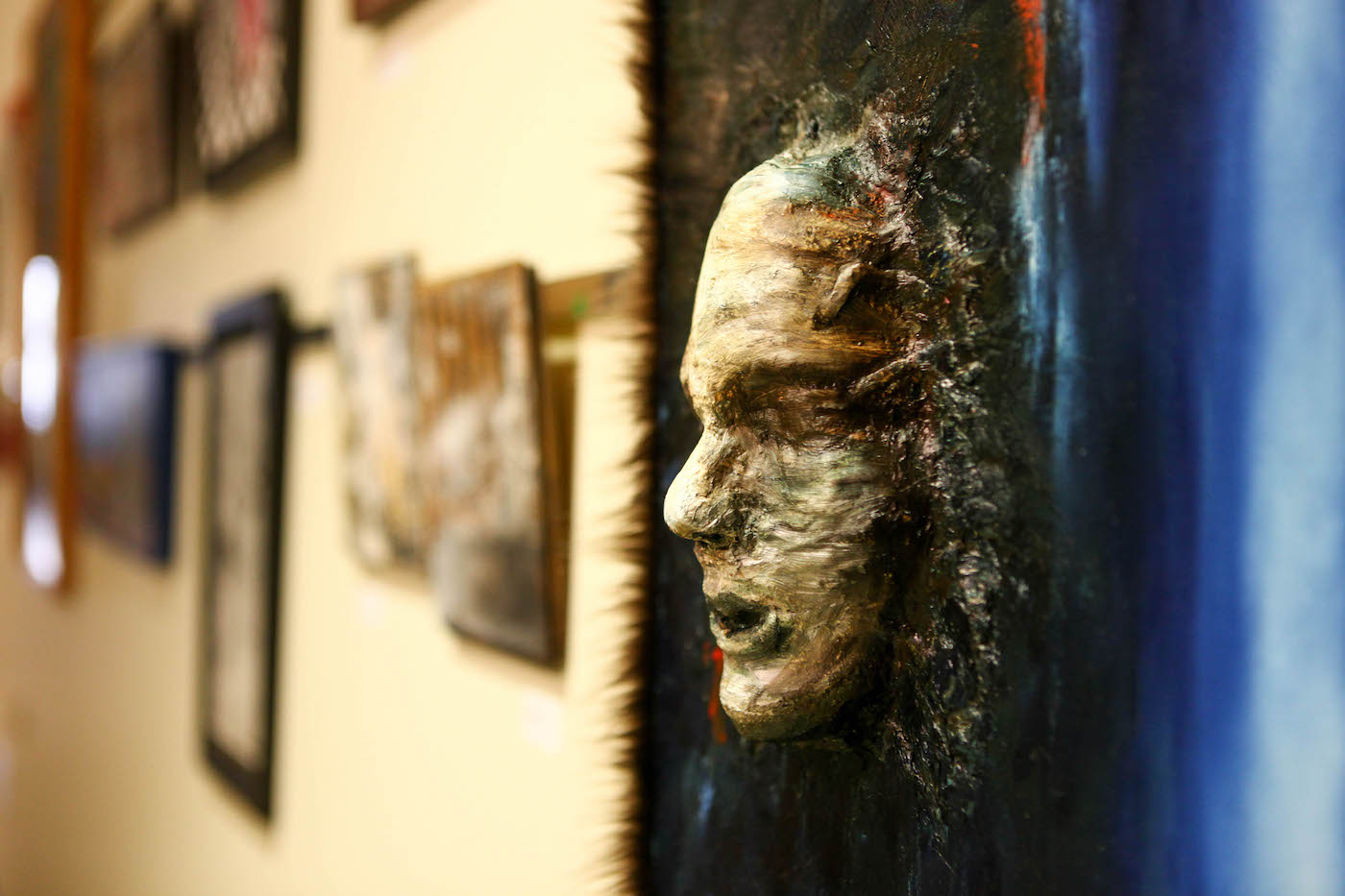 Group exhibitions at the Tech Garden gallery tend to be sprawling shows with lots of work and varied media. Fun in Space: An Homage to Pulp Science Fiction fits that description nicely. It displays acrylics, mixed-media pieces, pastels and one coffee table.

Several works document the show’s connection to Fun in Space, a 1981 solo album by Roger Taylor, a rock drummer with the band Queen. The album’s cover has an illustration that appeared in Creepy, a horror comic, and its backside features a photo of Taylor reading the publication. It’s clear that the exhibition is inspired by the album and affection for the pulps.

The show is also open to a wide range of artworks. “Amazing Aliens,” an acrylic by Eileen Arnold, depicts Doctor Who and other characters from either television or movies. Jamie Ashlaw’s piece also accesses mass media. In one scene, Star Trek meets Star Wars, Spock and Princess Leia take part in an intergalactic dancing contest. There are pieces referencing the cosmos. Paula Brewer’s mixed-media work portraying planets and space is situated on top of a coffee table. “Seer Between Worlds,” by Prudence Haze, envisions a mystical journey.

Several works reflect a freewheeling approach. In a mixed-media piece, Chris Mooney depicts a rat on a skateboard, a cockroach in shoes, and a vehicle with both standard features like wheels and an unconventional element — a shark’s head. In “Scout,” by an artist identified only as Marc, a gigantic robot makes friendly contact with earth animals.

Fun in Space also displays pieces interpreting space exploration. Some are humorous, like Steve Nyland’s “Grouchy Old Cosmonauts” or Victoria Yeldon’s “Astro Giraffe,” in which a giraffe appears in a space suit. “Liftoff,” by Timothy Rand, is more straightforward; it chronicles the initial step of a space trip.

And the show has artworks not easily characterized. Ben Coupe’s collage “Moon Rock” situates a finger-snapping Elvis Presley performing for an extraterrestrial audience on the moon. A small alien at the end of a wire is the centerpiece of Glendon Allen’s mixed-media assembly, which extends from a pedestal on the floor up the wire. Charlie Sam’s acrylic and enamel on canvas, “Space Robot,” integrates multiple small shapes: snakes, clocks, a skull, stars, and yes, a robot.

Other interesting pieces include “Stellar Garden,” an ink-on-paper creation by Alexandra Malthais; Frances Wagner’s mixed-media assembly; Peter Allen’s pastel, “Mythological Creatures: Astronaut”; and “The Space Gods Have No Need to Lie,” by James McCampbell, which features blazing orange color and a formidable trio of space deities.

Fun in Space is very much a genre-based exhibition, but that doesn’t short circuit its appeal. This is an enjoyable show that’s open to many visual possibilities. It’s on display through March 24 at the Tech Garden, 235 Harrison St. Gallery hours are Mondays through Fridays, 9 a.m. to 4 p.m. For more information, call 579-2864.