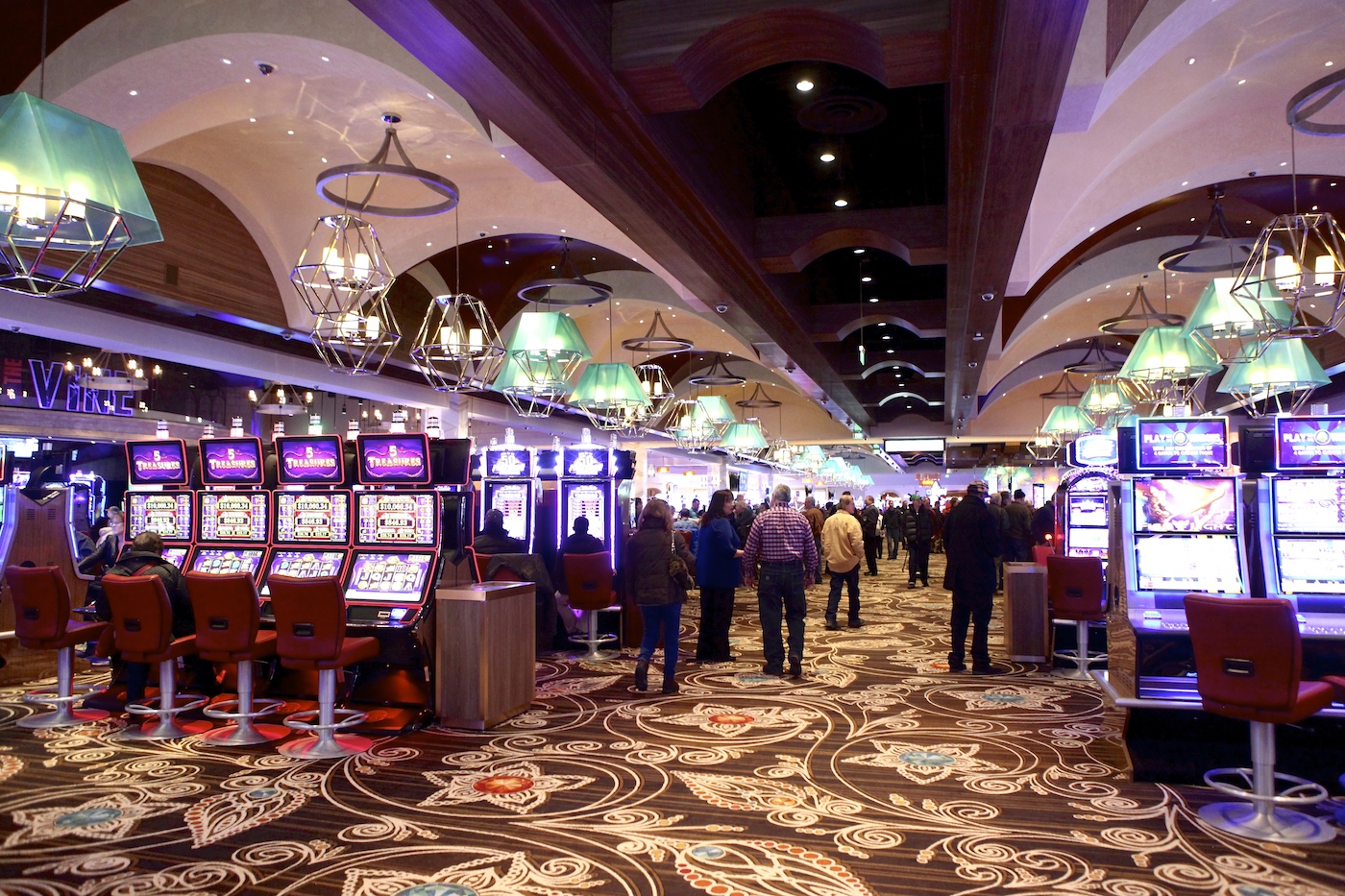 New Kid On The Block

On the morning of Feb. 1, the del Lago Resort and Casino’s doors were opened to the mass of patrons that had lined up outside for hours in the 30-degree temperatures. Soon afterward, most of the venue’s slot machines were jammed with customers, while the roulette wheels spun and the dice rolled.

The Seneca County town of Tyre rolled the dice, too, as it welcomed its newest privately run casino. Del Lago is one of four non-Indian casinos to be built in New York state, according to a 2013 referendum initiated by Gov. Andrew Cuomo. Del Lago is 40 minutes away from downtown Syracuse. “Today is a major victory for Seneca County,” said Jeff Babinski, del Lago’s executive vice president and general manager, on opening day. In the near future, the Catskills and the Schenectady area will be seeing the same victories as they were granted casino licenses in December 2015.

Del Lago means “of the lakes,” which falls in line with designating the area as a gateway to the Finger Lakes region. “We shared a vision of del Lago Casino, and it’s off to a great start,” said co-chair Thomas C. Wilmot Sr. “Seneca County could not have been more welcoming.”

Talk about the construction of the $440 million project began in 2013, but the foundation of the project was started on shaky ground. There were several issues that the project heads, which include co-chairs Brent Stevens and Wilmot, had to hurdle.

In August 2016, a lawsuit was dismissed. The taxpayers were irritated about a $45.3 million payment in lieu of taxes. According to an article in Rochester’s Democrat & Chronicle, Joseph Spector reported that now former state Sen. Michael Nozzolio had paid Wilmot between $150,000 and $250,000, inciting a potential conflict of interest.

The Oneida Nation and other resort opposition continue to stand their ground against del Lago. In 2015, the Yellow Brick Road Casino, 800 E. Genesee St. in Chittenango, was opened by the nation. The trifecta that is the Oneidas, Turning Stone Resort and Casino and the group of taxpayers making up Casino Free Tyre claimed the project ignored environmental impact studies.

With consideration to the other casinos throughout upstate New York, competition could be an underlying factor in the now-dismissed lawsuit. More casinos mean more options to gamble, which mean a potential loss of income for established racing and gaming resorts.

WSTM-Channel 3 reporter Brett Hall also pointed out the cemetery in del Lago’s parking lot. The New York State Cemetery Association prohibited Wilmot and his team from raising the dead in this small family burial ground. Instead, they paved around it.

Town of Tyre supervisor Ron McGreevy wasn’t shy about recognizing these issues, as he reminded everyone to be patient and stay positive. “This is the economic boost the local economy needed,” he said. “We envision a bright future.” A visitor plays to win on one of the venue’s 2,001 slot machines. Michael Davis photo | Syracuse New Times

Not only will the resort bring tourists into the area (indeed, there has been a mighty surge of traffic since Feb. 1, as cars take the New York State Thruway’s Exit 41 Waterloo-Clyde to reach del Lago), it will also be attractive for businesses. Recent openings have included a Byrne Dairy and an affordable housing complex, and there is an expected car dealership and Dunkin Donuts to be built in the near future.

“Our investors have committed to this beautiful property on the premise that del Lago Resort and Casino will be a world-class destination focused on community pride,” said Stevens. He promises integrity and exceeding expectations. They aim to lure 3.2 million visitors each year and $250 million in gaming revenue. Tyre and Seneca County will see $3.4 million in taxes, and the state will rake in $68 million.

Job creation is also something they’ve boasted about. On opening day, Stevens made note of 1,504 employees. When the hotel and spa are finished by the beginning of summer, 300 employees will be added to the roster. Also, 1,800 construction positions were filled to build the casino from the ground up. “Of the 1,400 craftsmen in construction, some of them worked 90 consecutive days,” said Wilmot. The hard work helped erect a 94,000 square-foot facility with 2,001 digital slot machines. For those looking to give their eyeballs a break, del Lago offers 89 gaming tables and an additional 12 poker tables.

Juris Basens, assistant general manager, gave reporters a tour of the facility. He pointed out The Vine, the three-floor entertainment showroom that boasts a 2,400-seat occupancy and features upcoming acts such as Boyz II Men (March 3), Joan Jett and the Blackhearts (March 11), Impractical Jokers (April 1) and Trace Adkins (April 7). Bad Company kicked off the venue’s opening with a sold-out Feb. 10 concert.

He also pointed out the highlighted restaurant Portico, run by Fabio Viviani, the Italian-born chef who was a standout on the Bravo television series Top Chef. A ribbon-cutting event is slated for Thursday, Feb. 23, 2 p.m. Another offering is the Farmers Market Buffet, an all-you-can-eat dining area specializing in locally sourced produce and meat. The food court features Moe’s Southwest Grill, Smashburger and the Finger Lakes-based Ciccino’s Pizzeria.

The food court is adjacent to a MacKenzie-Childs store, which was included due to the warehouse’s proximity in Aurora. Even the bathrooms are decorated with a notable checkerboard pattern, and everyone can feel like royalty while sitting on the throne.

Whether lounging in Centrifico, the lounge in the center of the gaming room, or concentrating on the game at hand, visitors will be able to breathe in clean air. The facility, which allows 21-and-older gamblers to play, is 100 percent smoke-free. There are three outdoor smoking areas, which are heated during the winter months.

The governor noted that every other state around New York was able to successfully pull off a gaming industry. Of course, the state education system does benefit from it. “We needed to get that leg in,” he said. “Gaming could be done by every other state around us, but we could not figure it out in New York. We had to go through the legislature with two different acts; that’s like running the gauntlet twice. But we went to the people of the state and we passed the referendum. Today we are standing in a magnificent monument of how intelligent the decision was.”

Cuomo made it clear he has high hopes for his state, especially upstate and Central New York. “No one has what we have in upstate New York,” Cuomo said. “We didn’t market it. We didn’t use it. We didn’t develop it, but nobody had our natural assets. And what we said is, ‘If we make the effort, we make the investment, you’re going to see upstate New York rise to the occasion.’”

The governor noted recent business highlights such as the resurrection of Hotel Syracuse, now Marriott Syracuse Downtown, 100 E. Onondaga St., and the 2016 New York State Fair’s record-breaking attendance. “All of these feed off each other,” Cuomo declared. “Now you’re seeing the positive synergy. Now you’re seeing an era of growth, and growth begets growth and investment begets investment. All upstate New York needed was exposure. We just had to take the first step, and you needed some courageous businessmen to believe and to step up and invest and get it done.

“That’s what today is all about, and I really believe that the best is yet to be. The growth you are seeing now all across upstate New York is going to increase exponentially. So let’s cut this ribbon, and let’s get to those slot machines!”

To view the rest of Michael Davis’ photos of the del Lago Resort and Casino, click here.

SU Must Deck Duke To Be Part Of March Madness
Photo Gallery: Syracuse Men’s Basketball Vs. Duke
To Top