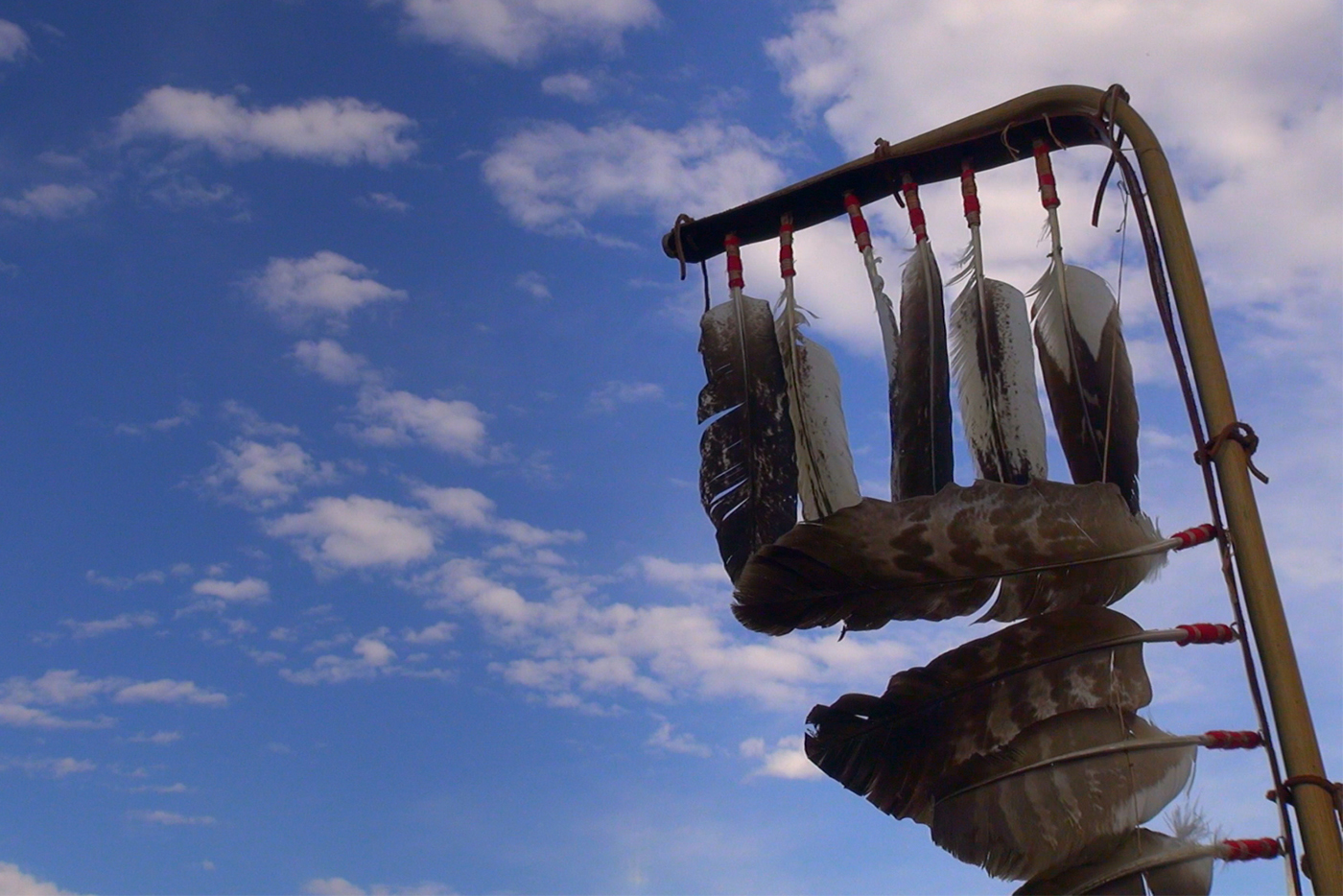 Films about the Onondaga Nation on view at this weekend’s SpringFest.

About halfway through director Gwendolen Cates’ beautiful documentary The Good Mind comes an unusually intimate look at life on the Onondaga Nation. Asa Shenandoah is talking about her 2-year-old son, Hadowaets, whose Native name means “he hunts.” The boy’s daycare teacher asked why he dances in a circle. That’s the way the Onondaga dance, Shenandoah told the teacher.

She sees it as evidence that her son will carry on Onondaga traditions. “He’s getting it,” Shenandoah says in the documentary. “It’s a part of who he is.” The scene ends with a shot of the boy holding a toddler-size lacrosse stick.

In another touching scene, Onondaga Chief Jake Edwards talks with his granddaughter, Kaidence Cronin, as she spells her Indian name on a smartphone. Edwards, too, takes pride in his descendant’s interest in her Native heritage. The two moments highlight the message of documentary: The Onondaga are still here, their culture will endure and their story is worth telling. Jake and Kaidence in the woods, as seen in the film “The Good Mind.”

The Good Mind will screen at Eastwood’s Palace Theatre on Saturday, April 30, during the Syracuse International Film Festival‘s four-day SpringFest 2016. It’s one of four films with Native American themes that are part of the festival’s third run. Cates and Onondaga Nation representatives will participate in a panel discussion after the 12:30 p.m. showing.

“It’s a glimpse into an international world in our backyard,” Mike Massurin, the festival’s executive director, said of The Good Mind. “We should be proud that they’re here.”

Also showing on Saturday are two short films that address Native issues. My Identity, by Yasmin Mistry, is about a young Native-American Caucasian girl who converts to Islam. Iroquois Creation Story is an animated film by Cat Ashworth. Grammy Award-winning singer and songwriter Joanne Shenandoah, a member of the Wolf Clan of the Oneida Nation, narrates the film. And Sunday, May 1, 1 p.m., will feature a screening of America’s First Sport, Dennis Deninger’s film about lacrosse.

Cates appreciates the access she was allowed on the Onondaga Nation. “I knew and completely respected that people would need time to know me and get to trust me,” she said. “The key word is respect and the key action is listening.”

The New York City filmmaker first visited the Onondaga Nation when researching Indian Country (Grove Press, 2001), a collection of photos of Native Americans. Publishers Weekly called the book “heartening in its honest, thoughtful treatment of individuals and their cultures.”

After a 20-year photography career, Cates turned to filmmaking. Her first film, Water Flowing Together, offered a portrait of Jock Soto, a Navajo who retired from the New York City Ballet in 2005 after a 24-year dancing career. It aired in 2008 on the PBS series Independent Lens.

Cates also documented the summer 2013 Two Row Wampum Renewal Campaign, a project to illustrate the continuing relevance of the 1613 agreement between the Haudenosaunee and the first European settlers, the Dutch. Haudenosaunee, other Natives and allies paddled together from Onondaga Creek to the Hudson River as a reminder of the ancient commitment to peace and friendship.

The idea for The Good Mind evolved as Cates learned more about the Haudenosaunee’s efforts to keep alive their traditions despite the loss of their land and attacks on their culture and way of life.

“I have enormous respect for the Haudenosaunee and for the integrity of the Onondagas,” Cates said. “They have such dignity in the face of everything that’s happened to them. I hope that people take note of that.”

The film premiered in February at the Big Sky Documentary Film Festival in Missoula, Mont. It was among 33 international films screened at the April 21-April 24 San Francisco Earth Day Film Festival, and will be shown at Cinemapolis in Ithaca (date to be announced) and the Lake Placid Film Forum in June.

The Good Mind’s title refers to the Haudenosaunee philosophy and way of life. “If the good mind prevails, peace prevails,” Onondaga Nation faithkeeper Oren Lyons says early in the film.

“To me, the good mind means integrity, compassion and respect for all living things,” Cates said. “It’s trying to live your life in a way that reflects your values.” In 1779, Gen. George Washington ordered troops to kill Natives and take their land in what Frieda Jacques, Onondaga clan mother, calls a genocide attempt. “We’ve gone through a great deal, but as we go, we get stronger,” she says in the film. “We’re pretty stubborn, so we’re still here.”

“The Onondagas certainly are not going to rest until they get some justice for their land,” Heath says in the film.

The Good Mind hits on sovereignty, the Great Law of Peace, the Haudenosaunee influence on American democracy, the Doctrine of Discover, indigenous rights, environmental stewardship and lacrosse. It’s also a love letter to a way of life.

“Our Creation Story begins with the Earth,” Asa Shenandoah says in the film. “Our sacred places are right here. That’s an ingrained part of who we are, to worry about the environment and how people are treating the Earth.”

Cates offers a counterpoint to the justifiable anger and frustration over centuries of mistreatment in the extraordinary personal moments she captures. In scenes with young children, viewers see the vulnerability, affection and hope of the Onondaga people.

Like the Onondaga elders she documents, Cates is optimistic about the future of the Haudenosaunee. “There’s no question their culture will endure,” she said. “Like so many Native people, they’ve been invisible. That needs to change.”

Renée K. Gadoua is a freelance writer and editor. She covered the 2013 Two Row Wampum Renewal Campaign for the Syracuse New Times. Follow her on Twitter @ReneeKGadoua.

The Rest of SpringFest

SpringFest is the younger sibling of the larger Syracuse International Film Festival that is presented in the fall. The first SpringFest featured seven films; this year it includes 15 films, as well as the Syracuse University College of Visual and Performing Arts Faculty Showcase. Local music makers will also participate with shows at Eastwood’s Palace Theatre: The McGriff Brothers perform Friday, April 29, 5:15 p.m., and the Golden Novak Band takes the stage Saturday, April 30, 5 p.m. Behind the White Glasses, by Valerio Ruiz, in an 80-minute documentary about the filmmaker and writer Lina Wertmüller, the first woman to receive an Academy Award nomination for best director for Seven Beauties (1975). The local connection? Syracuse University students, studying with Owen Shapiro, festival co-founder and artistic director, interviewed Harvey Keitel, who starred in Wertmuller’s 1986 melodrama Camorra: A Story of Streets, Women and Crime. (Friday, April 29, 7 p.m.)

Garwin, by SU professor Richard Breyer and SU grad Anand Kamalakar, a look at the life of Richard Garwin, a physicist who was the author of the design used in the first hydrogen bomb in 1952. (Saturday, April 30, 3:15 p.m.)

Irrefutable Proof, by director Ziad Hamzeh, screenwriter Richard Castellane and cinematographer Robert Draper, begins with a car crash preventing Jeanine Markham, a world-renowned astrophysicist, from delivering a controversial lecture about her findings. The film features scenes shot at SU and the Landmark Theatre. The crew had planned to shoot a fiery crash in Armory Square, but after Syracuse officials in 2015 requested $20,000 to provide police and fire vehicles for the scene, the filmmakers shot the scene in Utica. (Saturday, April 30, 9 p.m.)