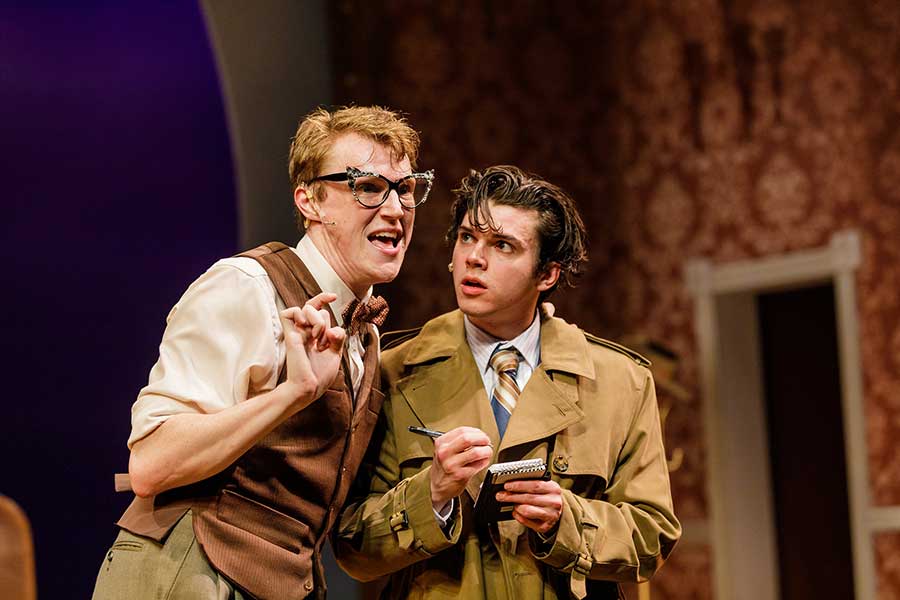 Savor for a moment the paradox in the title of Joe Kinosian and Kellen Blair’s musical comedy Murder for Two, running through Sept. 15 at Auburn’s Merry-Go-Round Playhouse. If there are only two persons, how can there be space for a victim, a perpetrator, a detective or, for that matter, the butler? It turns out they’re all there, including a ballerina, three rowdy choirboys and a psychiatrist, but not the butler.

There are two performers: Short Anthony Norman plays the investigator Marcus, while tall Noel Carey supplies all the rest, including all suspects, for more than 90 wild minutes, with no intermission. They both also really play the piano.

Murder for Two feels like a labor-saving show. After all, by the end of the summer all of the chorus girls and boys have left town, and the tech crews have been reduced. One could imagine Murder for Two as a cabaret act, or even staged in a closet.

But the MGR folks have moved it upmarket. Although action begins in front of a scrim, that’s quickly pulled away to reveal Czerton Lim’s set design, with props suggesting an upper-class home.

There is a plot, even though it’s not the focus of our attention. Officer Marcus is called to a New England mansion to investigate the murder of novelist Arthur Whitney, a man with a host of enemies. The first informant is the deceased’s wife Dahlia, a flamboyant Southern belle. Opening lines suggest an origin in the works of James M. Cain or Raymond Chandler rather than Agatha Christie. Another good source of information is the addled psychiatrist Dr. Griff (puns with gruff), who seems to have been treating every loony on the roster.

Both Norman and Carey are masters of mime, a word that gives many audiences a chill. Instead, think of them as bodily expressive silent film comedians, well directed by Scott Weinstein. Norman, with a mop of thick black hair, exudes the aggression of the younger Charlie Chaplin, before he discovered pathos. And Carey has something in common with Harold Lloyd, only more supple and lithe.

Verbally, Carey embodies the manic energy we used to associate with Robin Williams. He’s mercurial in leaping across gender, class and age barriers in an instant, needing only a turn of the head and a raised elbow to evoke haughty prima ballerina Barrette Lewis. He delivers the most sustained bravura performance seen all year.

No stranger to the Auburn stage, Carey stole the show as rockin’ Jerry Lee Lewis in Million Dollar Quartet (August 2016). He’s also a specialist in this multi-part role, having performed it in Chicago just a month ago.

Mania is hard to maintain, however, as we have pretty well guessed who done it well before the end. Carey and Norman never flag, however, as they frantically retell the story at the end at hyper-speed.