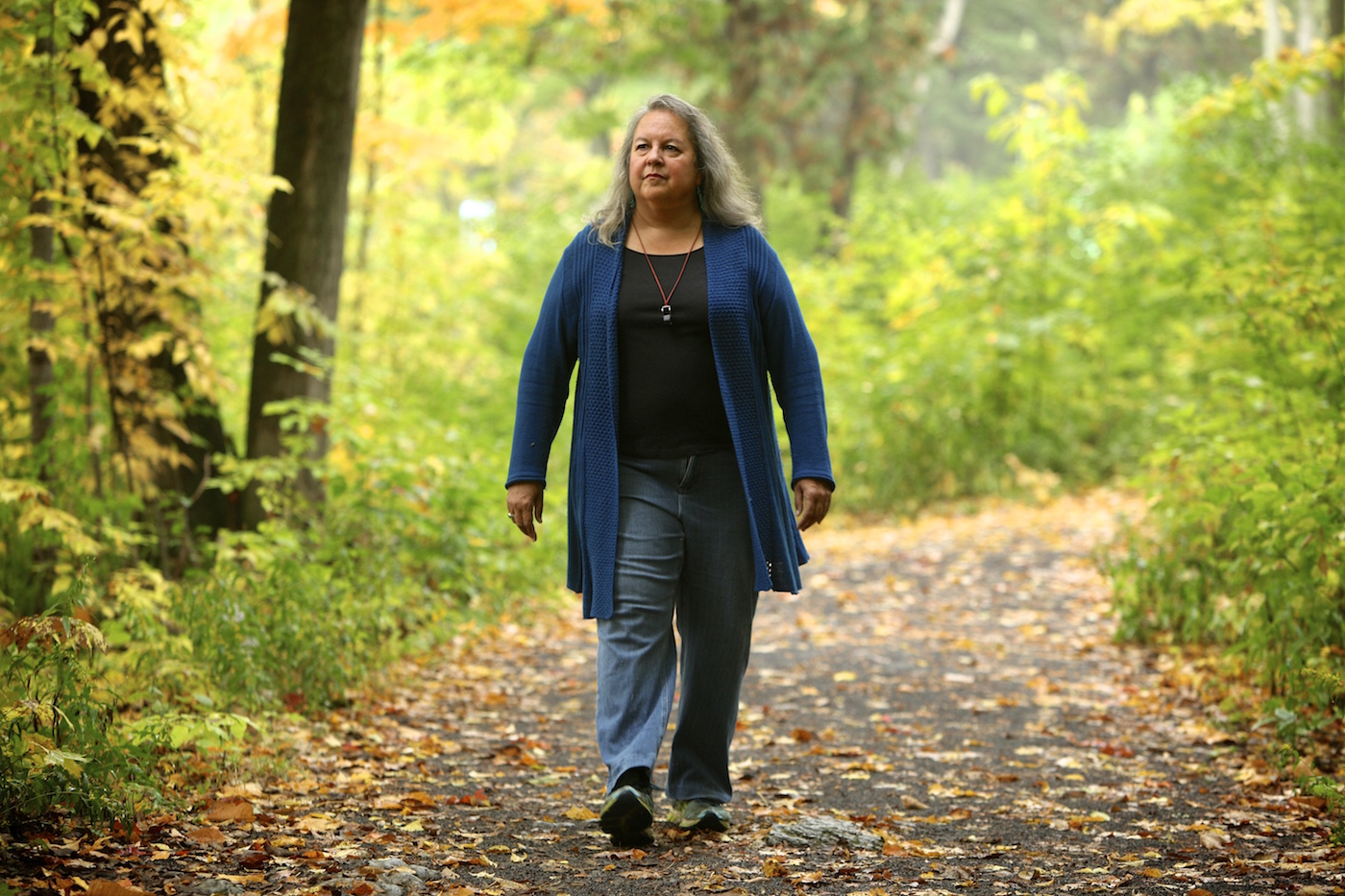 If you go leaf peeping and consider the stunning displays of reds and oranges and yellows simply wallpaper pasted in the sky for your entertainment, you’re doing nature wrong, says Robin Kimmerer. “Those are our relatives,” she said. “We are all related, and the birds and the trees and the water all have something to teach us.”

That philosophy drives Kimmerer, a Native American educator, environmental advocate and writer. It’s a message the SUNY Environmental Science and Forestry professor has shared in classrooms, on the written page, and on the world stage. She will be recognized for those efforts as one of four recipients of ESF’s Feinstone Environmental Awards. She will receive the award at a banquet Wednesday, Oct. 26. Kimmerer stresses relationships with the land in her courses in botany and indigenous issues and the environment. Michael Davis photo | Syracuse New Times

Kimmerer described her hopes for a new relationship between humans and nature to achieve global sustainability, informed by indigenous wisdom. “The indigenous worldview has been marginalized for generations because it was seen as antiquated and unscientific, and its ethics of respect for Mother Earth were in conflict with the industrial worldview,” she told the United Nations in its commemoration of International Mother Earth Day.

But scientific knowledge and traditional ecological knowledge (TEK) are not in conflict, and the answers to challenges like climate change lie at the nexus of the two, she said in a recent interview at her ESF office. A makeshift table display featured a large shell, pieces of braided sweetgrass and numerous feathers.

“The crises we face are associated with choices related to values,” Kimmerer said. “We talk about nature as a machine rather than in relation to humans. Science is not the only tool.”

Traditional ecological knowledge “includes mind and body,” she said, while “science privileges the mind and sets aside emotion and spirit. To heal the environment, we have to heal our relationship with the land.”

Kimmerer stresses relationships with the land in her courses in botany and indigenous issues and the environment. An expert in mosses (that’s bryology in academic lingo), she founded ESF’s Center for Native Peoples and the Environment to connect traditional ecological knowledge and scientific ecological knowledge. The center’s programs include a student exchange between ESF’s Huntington Wildlife Forest in the Adirondacks and the College of Menominee Nation in Keshena, Wis.; efforts to encourage Native students to attend graduate school; and a youth program with the Haudenosaunee Environmental Task Force.

The center recently won a three-year $652,811 grant from the U.S. Department of Agriculture to develop a new graduate program integrating indigenous knowledge with scientific knowledge in service to sustainability. The grant funds a collaboration between ESF and the Salish Kootenai College and Hopa Mountain Native Science Fellows in Montana.

Kimmerer delivers her message firmly, but softly and thoughtfully. Consider this poetic example from her 2013 Braiding Sweetgrass: Indigenous Wisdom, Scientific Knowledge and the Teachings of Plants (Milkweed). “Whether we jump or are pushed, or the edge of the known world just crumbles at our feet, we fall, spinning into someplace new and unexpected,” she wrote. “Despite our fears of falling, the gifts of the world stand by to catch us.”

The book won the 2014 Sigurd F. Olson Nature Writing Award, which praised Kimmerer’s work for addressing the human relationship with the natural world in “a lyrical and almost spiritual way.” Her first book, Gathering Moss: A Natural and Cultural History of Mosses (Oregon State University Press, 2003), was awarded the John Burroughs Medal for outstanding nature writing.

“Science and traditional knowledge are not at odds,” Kimmerer said. “Both are ways of celebrating the world in a deep and rich way.” When it comes to climate change, “We’re only using the science, so we’re running into dead ends.”

The bottom line, she said, is: What kind of world do we want to create? “Are we going to create justice for humans as well as for the living Earth? Native practice and philosophy give people a choice.” Those conflicting worldviews are on display in the months-old protests near the Standing Rock Sioux Reservation in North Dakota. More than 100 Native American tribes have set up camp there to oppose construction of an oil pipeline. The project would run nearly 1,200 miles from North Dakota to Illinois, threatening both the water supply and sacred sites.

The protests “represent the largest mobilization of Native American activists in more than 40 years — and one of the most vital campaigns for environmental justice in perhaps as long,” The Nation wrote last week. The magazine further called the protests a “struggle against broken treaties, environmental injustice, and government-sanctioned kleptomania.”

This “stunning show of unity” is “a turning point,” Kimmerer said. “People are saying, ‘Enough. Unless we treat the land as if it’s full of sacred meaning, we will not survive.’”

She noted that mainstream media were slow to cover the growing protests — until there were reports of guards with dogs, tear gas and riots. “The angry Indian narrative got press,” she said. “That asks us to think about human rights and justice, but does not get to the central issue of what are our responsibilities to the land.”

In thinking about Standing Rock, climate change and the beauty of nature, Kimmerer remembers her ancestors. She grew up in Saratoga and is an enrolled member of the Citizen Potawatomi Nation in Oklahoma. The nation’s predecessor, the Mission Band of Potawatomi Indians, originally lived in the Wabash River valley of Indiana.

After President Andrew Jackson signed the Indian Removal Act into law in 1830, mounted militia forced 859 Potawatomi at gunpoint to leave northern Indiana for “Unorganized Territory” in Kansas. The forced, 660-mile trek left more than 40 dead. The Potawatomi call it the Trail of Death.

From the mid-1800s to the 1970s, tens of thousands of Native American children were sent to boarding schools, where they were forbidden to speak their language or express their culture. Kimmerer’s grandfather attended one of the schools from age 9. He always regretted losing his language, she said.

“He lost so much,” Kimmerer said. “I’m deeply motivated to bring it back.”

Friday, Oct. 14, was one of those rare perfect fall days in Central New York. The temperature was in the high 60s, and Onondaga Lake glittered in the late afternoon sun. With a row of ducks swimming back and forth, and a sailboat resting across the lake, Tadodaho Sidney Hill and Mohawk elder Tom Porter described one of the most sacred items in Haudenosaunee history: the Hiawatha belt.

Haudenosaunee leaders show the 1,000-year-old belt of purple and white shells only on special occasions. The Hiawatha belt is a record of the creation of the Iroquois Confederacy at Onondaga Lake. On this picture-perfect day, Haudenosaunee leaders were at the sacred site as a film crew recorded their story for a PBS series on Native Americans.

Gary Glassman, a documentary filmmaker based in Rhode Island, is directing America Rediscovered, a four-part documentary expected to air in spring 2018. He produces films for the PBS series Nova, Discovery Channel, History Channel and BBC.

The Haudenosaunee segment will be the lead story in the second part of the series, Glassman said. The segment will feature the story of Hiawatha and the Great Peacemaker and explain the Hiawatha belt’s (known as wampum) role in the creating the confederacy.

Glassman spoke briefly to about 75 people gathered at the edge of the lake, then Porter delivered, in English, an abbreviated version of the Thanksgiving Address. “We are here today for this documentary so the world will see us,” Porter said. “We take our compassion and thank yous and love so there is a big pile.”

He reminded the group, which included Haudenosaunee children and elders and local officials, that Mother Earth will always support them. “She continues to love and nourish us every day,” he said.

Hill, spiritual leader of the Haudenosaunee, said the Hiawatha belt is not an artifact, but a living document. “This is who we are,” he said. “This is our identity.”

The Hiawatha belt was among 12 that were returned to the Haudenosaunee in 1989 after a 92-year fight. Some of the belts had been in the New York State Museum since 1898.

“Our ancestors touched it 1,000 years ago,” Hill said. “Now the children touch it. It’s like generations touching each other.”

Many indigenous cultures share an understanding of nature and humans in relationship, said Glassman. He’s highlighting the Haudenosaunee, in part, because of the irony of the sacred history of Onondaga Lake contrasted with its pollution resulting from industrial waste.

“The Haudenosaunee have so much to teach us about restoring the Earth,” he said.

The Water Is Life benefit concert, a rally that will be presented in solidarity with the Standing Rock Sioux Reservation protests in North Dakota, will take place Saturday, Oct. 22, 3 p.m., at Tsha’ Thoñ’nhes, Onondaga Nation Fieldhouse, off Route 11A north of Hemlock Road. There will be live music, speakers, food trucks, a silent auction and merchandise for sale throughout the day.

The benefit is open to the public, and free with the donation of warm winter clothes or winter sleeping bags or a monetary contribution to the cause. Musicians include Joe Driscoll, the Fabulous Ripcords, Johnny Ray and the Stone Throwers, Nataanii Means, Drezus and others, while the lineup of speakers include Robin Kimmerer, Tom Porter, Jeanne Shenandoah and Wendoyoh Estrada.

Four women in science will be recognized for outstanding achievement in advancing the cause of the environment and social environmental issues during the 2016 SUNY Environmental Science and Forestry’s Feinstone Environmental Awards. The awards were established in 1976 by Sol Feinstone, a 1915 ESF graduate who was a well-known historian and author. The winners are:

Robin Kimmerer. Distinguished teaching professor at ESF and the founding director of the ESF Center for Native Peoples and the Environment.

Janine Benyus. Co-founder of Biomimicry 3.8, and the Biomimicry Institute, a nonprofit that empowers people to create nature-inspired solutions for a healthy planet.