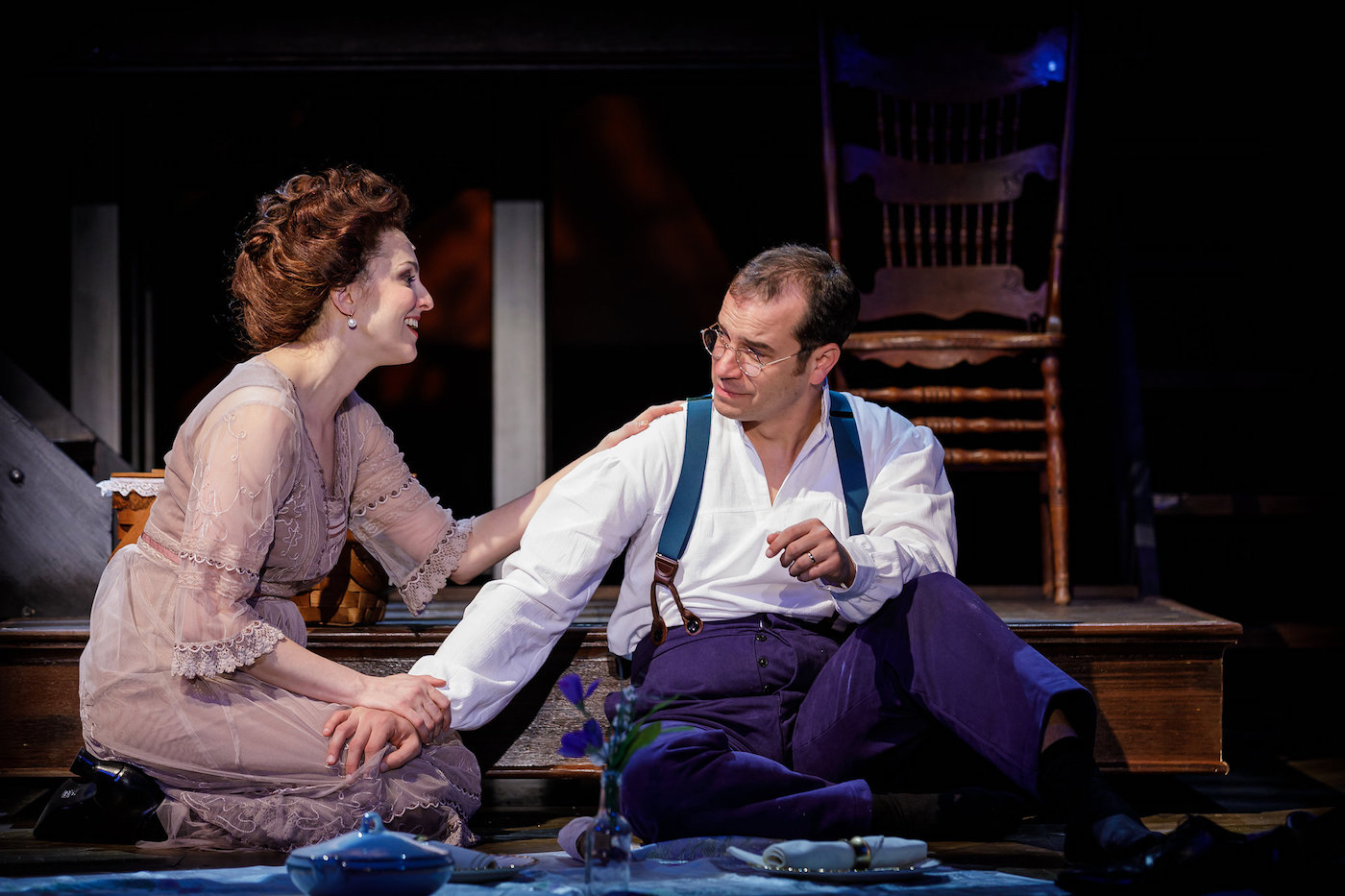 Merry-Go-Round’s ‘Parade’ is as gripping as it is timely.

Brett Smock, who took over as producing artistic director for Auburn’s Merry-Go-Round Playhouse three years ago, knows that summer fare consists of more than parfaits and meringue. His conspicuous artistic success of last summer, the musical version of From Here to Eternity, was edgy and gritty.

If the title Parade is unfamiliar to many audiences, there are at least two reasons for that. Most of the popular esteem for the show has come from regional theater productions rather than the initial Tony-winning but truncated 1998-1999 Broadway run. Secondly, the title is ironic as action begins and ends with parades for Confederate Memorial Day, when those not linked to the losing side in the Civil War, like Yankees, blacks and Jews, had to lie low.

Additionally, action unfolds like a kind of pageant over 10 platforms designed by Czerton Lim. Thirty-one performers take on more roles than we can count, yet another “parade.”

The episode at the center of the action, 1913-1915, has been the subject of 20 books and a memorable miniseries, The Murder of Mary Phagan with Jack Lemmon (1988). With the flimsiest of circumstantial evidence, the Georgia courts charge Brooklyn-born pencil manufacturer Leo Frank (Aaron Galligan-Stierle) of murdering a 13-year-old employee, Mary Phagan (Shannon Beel).

Frank is an educated, cultured man, a Cornell graduate (as is not mentioned in the script) who already feels uncomfortable in the South. Playing to nativist, class and ethnic hatred, the right-wing press whips up a storm of vitriol. A scheming journalist, Tom Watson (Jake Mills), the Nancy Grace of his day, demands a guilty verdict and gets what he wants.

Prosecutor Hugh Dorsey (Jamison Stern) builds his case on the coerced witness, Jim Conley (Fergie L. Philippe), a one-time factory worker who is also a fugitive from a chain gang. He claims some knowledge of the crime in a number titled, “That’s What He Said.” A powerless black man in a world of white supremacy, Conley’s testimony, as Uhry and Brown shape it, is a jewel of ambiguity and insinuation. The script will later finger him as the actual killer (not certain in historical record), prompting his second appearance in the show-stopping “Feel the Rain Fall.” Philippe, in convict’s stripes, is a powerhouse.

Parade is as much about family as it is politics and injustice. Galligan-Stierle’s Leo might be a balky, resistant prisoner, but his dramatic arc is as a husband. His wife, Lucille (Kristin Wetherington), is anything but a passive Southern belle. Virtually his only defender at the travesty of a trial, her heartfelt solo “You Don’t Know This Man” signals her resolve to do what she can. Their relationship parallels that of Governor John Slaton (Dave Schoonover) and his elegant wife, Sally (Adrien Swenson), so much so that we know they must eventually meet.

Five scenes later Brown’s music delivers the hatred stalking Leo Frank. After the governor’s own investigation reveals to him what a travesty the trial was, he commutes the death sentence to life, knowing he will pay a political price. Prosecutor Dorsey and sleaze-scribe Watson rile the mob in populist rage with “Where Will You Stand When the Flood Comes?” More than one audience member will find this number prophetic of the present time, as well as bracing within the drama. In life the Phagan case swelled the ranks of the reviving Ku Klux Klan and also engendered the founding of the Anti-Defamation League. Dorsey succeeded Governor Slaton, and Tom Watson became a U.S. senator.

Leo has been removed to Millidgeville, where he and Lucille enjoy an unexpected reprieve. Their heartbreaking love duet, “All the Wasted Time,” gives us Wetherington and Galligan-Stierle at their peak, a moment between rage and dread. Millidgeville is not far enough, however, and the mob’s bloodlust is sated. Director-choreographer Brett Smock’s staging has us face what we would rather turn away from.