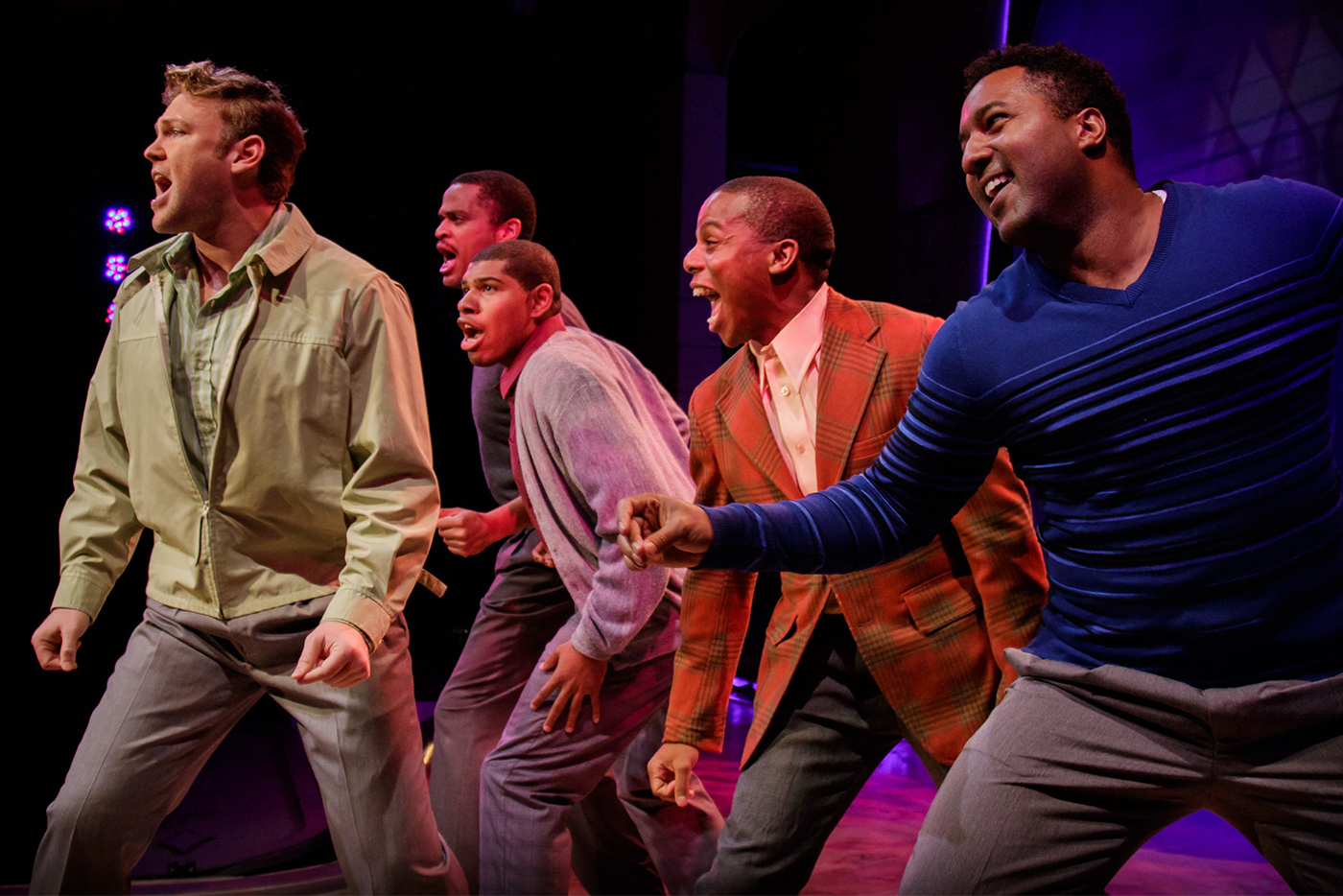 Audiences old enough to have listened to music on a transistor radio can be expected to know every song in Smokey Joe’s Café, the season closer that runs through Nov. 19 at Auburn’s Merry-Go-Round Playhouse. In fact, some may be surprised to learn that “On Broadway,” “Hound Dog” and “Stand By Me” were all written by the same two people.

Jerry Leiber and Mike Stoller were two white guys from Baltimore and Long Island who embraced black musical idiom without telling the public what they were doing or much about themselves. They were one of the most successful musical teams of all time, yet most people don’t know their names. Smokey Joe’s Café helps you fill in those blanks and figure out who they were.

Conceived by Stephen Helper, Jack Viertel and Otis Sallif in 1994, Smokey Joe’s had the longest run of any jukebox musical on Broadway, closing in 2000. It has no book or small talk, and in fact the actual song “Smokey’s Joe’s Café” is one Leiber-Stoller item missing from the songlist of 39 hits. A 2002 production at the Merry-Go-Round Playhouse did turn-away business during the regular season, and here it is again as a November treat. Most post-Labor Day shows at MGR are smaller in scale, like last month’s Rosemary Clooney tribute Tenderly. Not this time.

Hot as the 2002 production was, this version is much bigger, with clever choreography by D.J. Salisbury, a director with extensive national credits who is well-known for his staging of Les Misérables. Indeed, this mostly urban music, composed for the likes of The Coasters, The Drifters and the young Elvis, takes on a kind of grandeur when there are costume changes by Tiffany Howard for every number, and an onstage musical ensemble of seven.

Although Leiber and Stoller have been inducted into the Rock’n’Roll Hall of Fame, their output, some of it in collaboration with other writers like Phil Spector, Ben E. King, and others, is not so easy to categorize. Their first big hit, “Kansas City,” came in 1952, when the duo was barely 20, before the advent of Bill Haley and the Comets, when disc jockey Alan Freed was still calling the phenomenon “Moondog.”

Many numbers are linked to the young Elvis, of course, such as Michael Hunsaker leading the company for “Jailhouse Rock.” Yet the producers of the show and director Salisbury significantly stage “Hound Dog” for a woman’s voice, as it was originally written for Big Mama Thornton. The role here goes to Rheaume Crenshaw, a classic, sassy song belter, who also delivers strongly with “Fools Fall in Love” and “Saved.”

This is an ensemble company in which every singer has a solo in the spotlight, but Rheaume (always cited by first name in the program) sets herself apart with more than her powerhouse delivery. She’s the only one of the four women without a pencil-thin model/dancer’s silhouette. Our eye often goes to her first. She and director Salisbury use this to comic effect in “Dance with Me,” when the boys play at turning away from her.

Physical difference also marks the most reliable comic player, Cornelius Davis, who is also the shortest person on stage. With the possible exception of the novelty numbers like “Charlie Brown” and “Yakety Yak,” Leiber and Stoller weren’t much for humor, favoring emotion and romance. Which is all well and good when Smokey Joe’s Café is putting audiences of a certain age in a deeply mellow mood, but comic relief is always welcome in a two-and-a-half-hour show. Cornelius can play straight when the number calls for it, but he is also a gifted natural comedian who can generate laughter with the right shrug of a shoulder, as in “Shoppin’ for Clothes” and “Searchin’.”

The earnestness of deeply felt emotion is closer to Leiber and Stoller’s hearts, and many of those numbers go to Gabriel Mudd, especially in the showstopping “Stand By Me.”

Although Smokey Joe’s lacks a book, and Leiber and Stoller never take stands on social or political questions, the show is unmistakably still “about” something, and that’s the integration and acceptance of black idiom in white America. When young baby boomers first heard Leiber-Stoller hits during the Eisenhower age, they not only were unaware of the composers, they seem not to have perceived that the music might sound black. In this staging D.J. Salisbury has put white and black singers side by side most inconspicuously. Yes, Summerisa Bell Stevens is a blonde, but her duet “Trouble” with Candice Marie Woods is a perfect, harmonic blend.

White America learned before it could admit it that it loved African American cool and flair. We see it in “On Broadway,” one of the show’s more entrancing numbers, where Gabriel Mudd, Chris White, Denzel Edmondson and Cornelius Davis demonstrate how well they know how to walk as well as to sing.