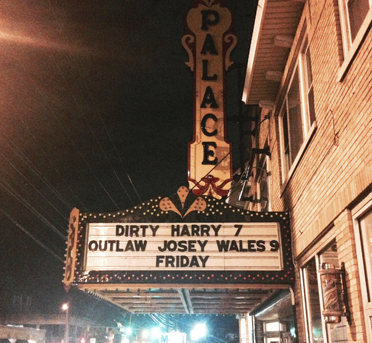 On Friday, December 5: Eastwood. Gets. Dirty.

The Palace Theatre, located at 2384 James Street, was built in the early 1920’s and claims its spot in the City of Syracuse’s history books. The theatre has been owned and maintained by the members of the Dibella family and currently by Michael Heagerty, and it still (thankfully) stands as a home to numerous events: parties held in the second-floor ballroom, concerts, Syracuse University basketball games projected on the big screen, and various comedy acts. Oh, and let’s not forget: movies.

The Palace marquee is an eastside beacon. Manually-changed lettering announces the now-showings and the coming-soons, sometimes announcing engagements and birthdays. Pulling the door open, it’s noticeably heavy and solid. The soft lighting enriches the aura and atmosphere – and this is especially noticeable at night. The smell of popcorn and the essence of the good ol’ days of cinema still remain today.

Jeff Meyer has kept the longstanding 35mm Brew and View film series alive and kicking since October 2005. This monthly event is complimented by the annual Salt City Horror Fest. The screenings and series do not necessarily get better over time, but the consistent quality resonates with viewers. October 2015 marks the official 10th Anniversary of Brew and View. Financial support from patrons is recycled back into the Syracuse arts community.

Meyer stated: “Most of the screenings I’ve done were for some cause.”

The Salt City Horror Fest began as The Shaun Luu Horror Fest, which was named in memory a friend; $10,000 was donated to Upstate Golisano Children’s Hosptial.

“Now the Syracuse International Film Festival and Film in Syracuse has picked up the sponsorship. Basically each Brew and View that happens is a fundraiser for SYRFILM, for furthering programs and raising film awareness in Syracuse.”

The Dec 5 Clint Eastwood double feature will begin at 7 PM. To kick the night off, Dirty Harry (1971) will be speaking through grinding teeth from the big screen. The Outlaw Josey Wales (1976) will show after intermission. Two classics that blow many modern day movies out of the water for the price of a single standard movie. Tickets are $10.

It’s the format that definitely wins me over.

I agree with Jeff, lobbying the 35mm format: “It’s the true medium that the films were screened from, the true way that the director wanted you to see his or her film. Each film print has a history to it.”

Film reels travel all the time, and it’s the reason why some theaters miss out on movies that you may want to see.

“You never know who watched the film in a theater,” Meyers explained.  “For example, Clint Eastwood might have owned the same Dirty Harry print that The Palace is screening.”

“This Clint Eastwood night is in part a charity evening where those in the Masonic Brotherhood (Freemasons) get in for free, and I left it up to their organization to find a cause on their end to raise funds for,” Meyer added.

Plus there is beer and wine for those 21 years and older, and this treats are something Regal cannot offer you.