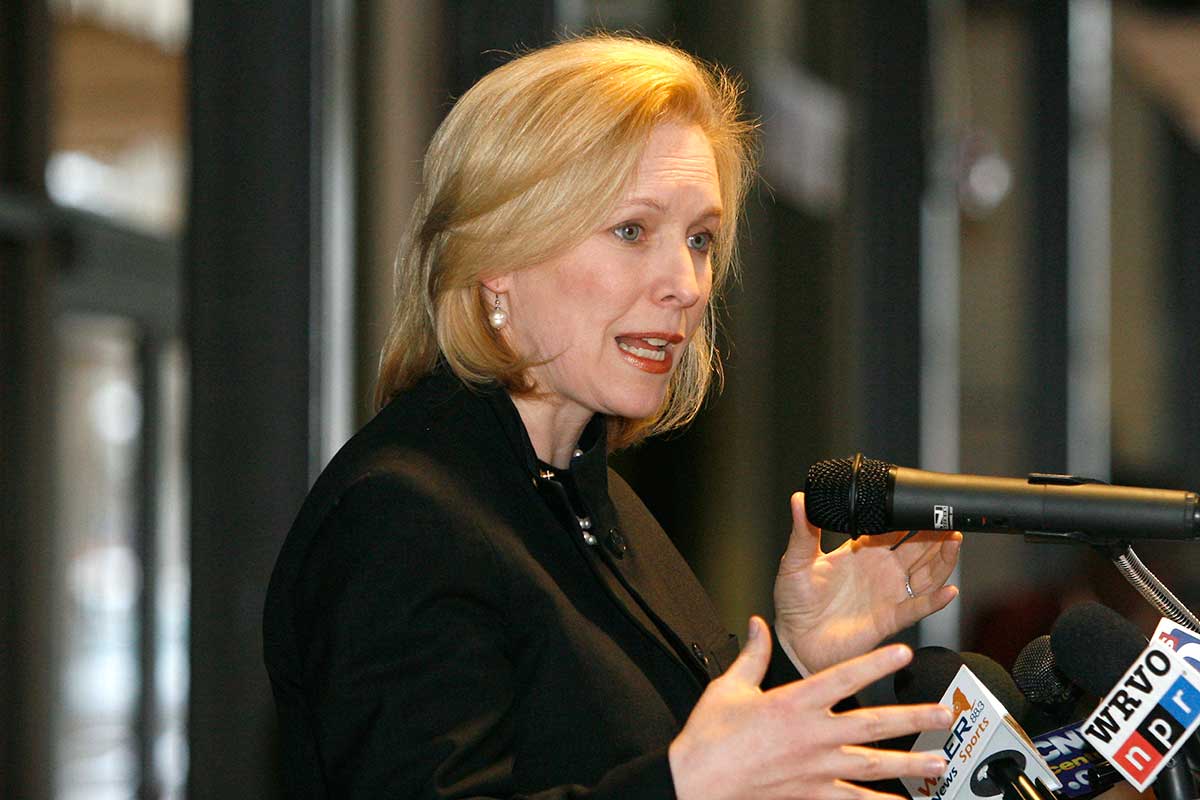 With one New Yorker already in the White House, another one hopes to replace him. Sen. Kirsten Gillibrand announced that she is running for president in 2020, joining an already crowded field of Democratic candidates hoping to take on Donald Trump.

The move ends years of speculation and expectation of her Oval Office ambitions. Indeed, President Trump had barely been inaugurated in 2017 when many experts believed Gillibrand was gearing up for a bid, ranking her high on shortlists of possible contenders. Just two months ago during a debate, Gillibrand had to fend off questions about the White House and pledged to “serve my six-year term” if she was re-elected to her Senate seat.

So could the junior senator born and raised in upstate New York be the Democratic nominee and then the next president of the United States? To begin with, outside of New York, she is not well known. And in a primary battle that may include big dogs like Joe Biden and Bernie Sanders who may suck up all the oxygen, Gillibrand must make her mark now if she wants to be treated like a serious candidate.

She’s doing that in a way that differentiates herself from the other Democrats who have already joined the race. It appears she’s positioning herself as the more strength-through-serenity candidate, someone who is firm but calm, passionate but logical. This offers a contrast to the more dynamic and aggressive styles of Elizabeth Warren and Kamala Harris.

Despite perhaps appearing more cool and collective, Gillibrand has been a contentious leader in the area Democratic voters most want one: Being the anti-Trump. Indeed, Gillibrand has voted against all but two of President Trump’s Cabinet nominees and was a leading critic of both his Supreme Court nominees.

In the last two years, Gillibrand has only voted with the Trump administration’s positions 11 percent of the time, according to FiveThirtyEight, which is the lowest of any Senate Democrat, including Sanders and Warren. In December 2017, Gillibrand made national headlines when she said on CNN that Trump should resign over allegations of sexual assault that first surfaced during the 2016 campaign.

Gillibrand’s anti-Trump posture will definitely help her win support among the Democratic establishment. Yet she will undoubtedly face fierce criticism and skepticism from the progressive wing of the party for her numerous past political positions.

Before being appointed to fill the Senate seat vacated by Hillary Clinton, who left to become President Obama’s secretary of state, Gillibrand burst into the political scene by winning a seat in the House of Representatives in 2006. She beat an incumbent Republican in New York’s 20th Congressional District, which at the time made up parts of the Capital Region and Hudson Valley.

Representing a very conservative district, Gillibrand took stances that would be frankly unthinkable for a Democratic presidential nominee of today.

She was at the time a member of the Blue Dog Coalition of conservative Democrats. She was strictly against amnesty for undocumented immigrants and “sanctuary cities,” and opposed giving driver’s licenses to undocumented immigrants, a prospect briefly floated in New York state a decade ago. She also supported a platform that would make English the official language of the United States and boasted an A rating from the NRA.

In addition, Gillibrand has also made moves that liberals fear make her appear very close to the Wall Street donor class, despite voting against the bank bailouts in 2008. Just weeks before she announced her run, Gillibrand reached out to wealthy executives of Wall Street firms to see if she could possibly get their support.

Such things make her an easy target of being the classic “flip-flopper.” But that curse could also be a blessing. If her current progressivism is enough for her to win the Democratic nomination, Gillibrand’s past conservatism could very well help her win a general election.

Her upstate roots could also be effective in peeling off some of the Trump coalition in working-class rural America that voted in droves against Hillary Clinton two years ago. Being a New York Democrat, she may be able to shake off criticism of being a coastal elite if she can convince people that, because she grew up in and represented rural areas, she understands the everyday forgotten men and women more so than a billionaire real estate mogul who lived in New York City his entire life.

Even after rushing to the left over the last 10 years, Gillibrand has still been successful at appealing to Republican areas of New York. In Warren County, in the southern Adirondacks, Republican gubernatorial candidate Marc Molinaro won 55 percent of the vote in the November election, while Gillibrand won 56 percent there in her Senate race.

Her campaign’s opening shots included touting that Gillibrand won more votes statewide than Andrew Cuomo in 2018 and Barack Obama in 2012. And she has kept a consistent positive favorability rating across the state while serving in the nation’s upper chamber.

When it comes down to why she may think she has a shot at the presidency, it may come down to the simple political equation that she’s the woman for the moment. The rise of the #MeToo movement, which most recently fueled female voters to elect a historic number of female candidates in the recent elections, is a revolution that fits all too well with her largest legislative legacy thus far: cracking down on sexual assault and harassment of women in the military.

She was the first Democratic senator to call for former Minnesota Sen. Al Franken’s resignation after forcible touching allegations. And she publicly stated that President Bill Clinton should have resigned during the Monica Lewinsky scandal 20 years ago. Gillibrand has been given the nickname “the #MeToo senator.”

Gillibrand has reasons to be confident, and just as many reasons not to be. But it seems that the timing of this campaign with the rise of the #MeToo movement will likely play in her favor.