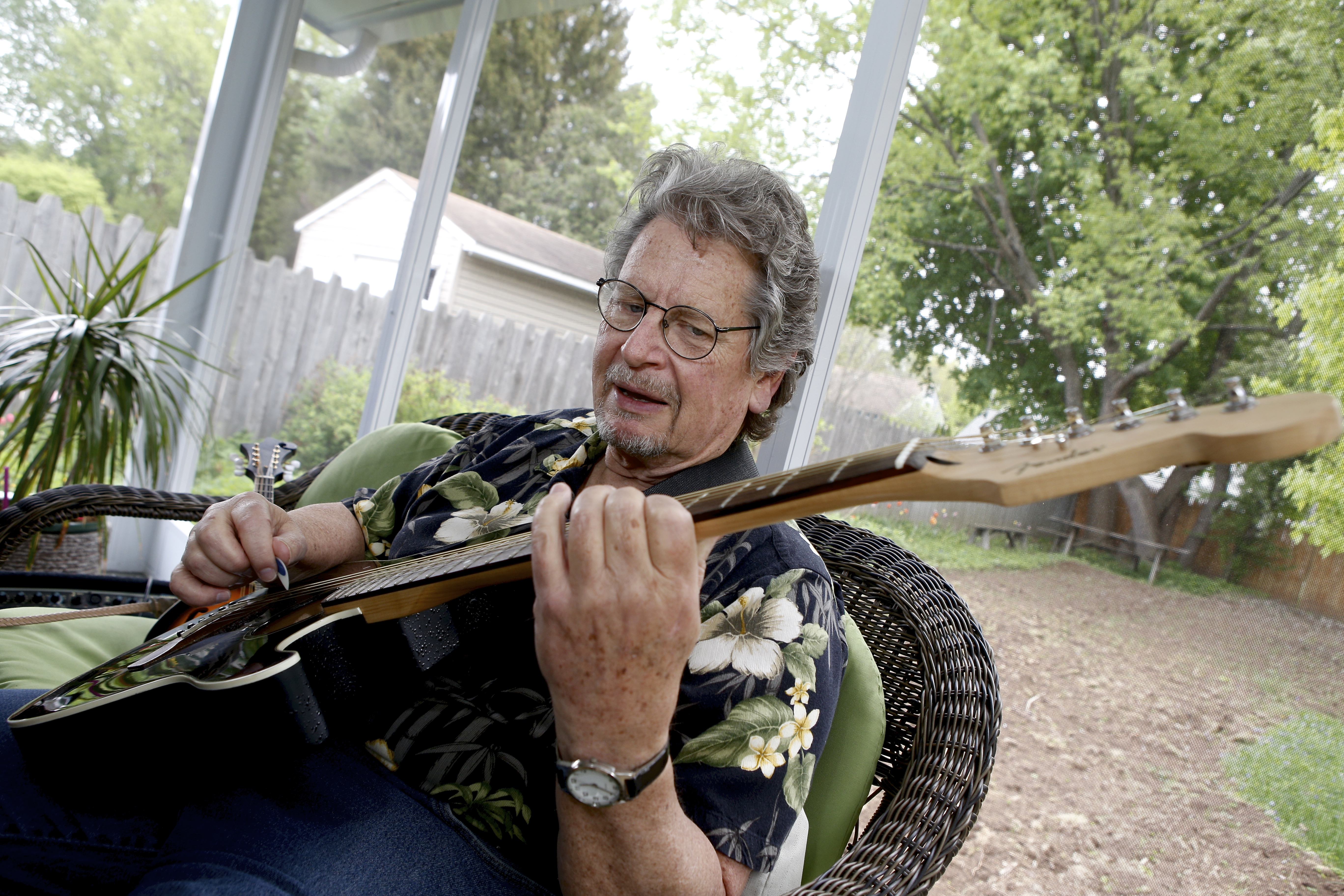 As a fixture of the Syracuse music scene for more than five decades, guitarist-vocalist Mark Hoffmann has been involved in major productions (such as the Salt City Waltz and Beatlecuse) and was inducted into the Syracuse Area Music Awards (Sammy) Hall of Fame in 2008. Yet his legacy goes far beyond the city limits.

Chicago-born but Syracuse-raised, Hoffmann grew up in a musical family. His father played guitar, violin and concertina, while his mother sang. Hoffmann started taking lessons on guitar at age 8.

“Some of my earliest memories of childhood were banging around on the guitar,” he recalls. “I was making noise but having fun doing it. And I wanted to get good at it.”

He played in bands during high school and found himself entrenched in the burgeoning folk scene in the early 1960s. “I played a place called Cap’n Mac’s Clam Snug,” he says. “I was a regular there with my high school chum Lou Martin, who went on to record and be a world-class mandolin player.” Following his graduation from Fayetteville-Manlius High School in 1964, Hoffmann attended Union College in Schenectady. Yet he would often travel back to Syracuse to perform with The Sidewinders, a 12-piece horn band that included drummer-pianist Howie Wyeth, who went on to play with Bob Dylan and the Rolling Thunder Revue.

As The Sidewinders eventually morphed into Jam Factory, Hoffmann decided to dedicate his time to the band instead of college. The group, which often played six nights a week, also featured Gene McCormick (lead vocals, saxophone, keyboards), Earl V. Ford Jr. (trombone), Kent DeFelice (bass and vocals), Joe English (drums and lead vocals) and Steve Marcone (trumpet and vibes). Band manager Joe Leonard hooked them up with an agency in New York City and by 1969 they were signed to Epic.

The six-piece band had a sound similar to Sly and the Family Stone. Lively and funky, punctuated by horns and accented by the kind of grooves that withstand the test of time, Jam Factory’s 1971 Epic album Sittin’ in the Trap has a sound that’s still relevant in 2015. Back then, it was also a sound that garnered them significant attention from those at the top of the music business.

“We heard later that Sly had come down to check us out,” Hoffmann recalls. “We did this show and when we came into the dressing room, there was John Hammond Sr. He was a legend in the business, discovering people like Bessie Smith, Bruce Springsteen, involved with Aretha Franklin. He walked in and my jaw dropped immediately. I went over and shook his hand and it was like an ‘I’m not worthy’ kind of thing. It turns out he was very instrumental in signing us to the label. He said, ‘It’s really nice to meet you. I really enjoy your music and I’m looking forward to having you on the label. And I’d like to introduce you to my friend, Jane Fonda.’ She was sitting right next to him and I didn’t even see her.”

The band toured in support of the album (which included an opener spot for Sly and the Family Stone’s concert at the Onondaga County War Memorial) and found themselves opening for the era’s rock royalty. They played Fillmores East and West with bands like Hot Tuna and opened for Iron Butterfly and Janis Joplin.

“We did this one show in Philly with Jimi Hendrix, The Grateful Dead, the Steve Miller Band and Cactus,” Hoffmann recalls. “There must have been 30,000 people there. It was an amazing show.”

Hoffmann’s bandmate McCormick had grown up in Orlando, also putting him in the same time and place as the Allman Brothers Band. “We were friends and would run into them around the country,” Hoffmann says. When some of the band decided to move south, they ended up living on the Allman farm. Even wilder, English ended up marrying Dickie Betts’ ex-wife. When Paul McCartney was searching for a drummer to play with Wings, he asked Allman Brothers beat-keeper Jaimoe for assistance. “Paul called Jaimoe and said, ‘I’m looking for somebody who is funky,’” Hoffmann says. “And Jaimoe says, ‘I got the guy for you sitting right next to me (Joe English).’ Paul says, ‘Put him on a plane.’”

Hoffmann stayed with Jam Factory from 1967 to 1974. Following the split, he put his roots down in Syracuse with several groups including Magic Fingers and the Mary Haitz Band. In 1971 he married Nancy Larraine Hoffmann, who was in the state Senate from 1985 to 2003, and they had three children, daughters Eva and Anna and son Gustav.

“In the 1960s, he was right there with all the major bands,” recalls now ex-wife Nancy Larraine Hoffmann. “He went to California and New York, Nashville and Macon. All the musicians wanted him to be a part of their activities. There’s no doubt he could have done some of that big-time life on the road, but when the time came and they asked, he said no because he loved being here in Syracuse with his family. He valued his family life more.”

Hoffmann worked for the Syracuse University Audio Archives and later for WTVH-Channel 5 as a sound engineer and cameraman for 28 years. “During those TV years, I didn’t really have the band because I was working TV hours, all the night and weekend shifts,” he says. “But thank God for all the blues bands in town because they said, ‘Just come out after the 11 o’clock news and sit in on the last set.’ That kept me from going insane.”

More recently, Hoffmann is enjoying retirement, but is far from retiring from music. He continues to play in groups like Swing This! with his partner Jo Anne Bakeman, Rebecca Keefe, Bob Purdy and Joe Davoli. He also plays with Gus and Anna in the Hoffmann Family Band.

“I don’t know how much longer I’ll have with either of them around; they could split in a heartbeat,” he says. “So I’m anxious to play as much as possible with them. There is certainly nothing better than playing with your own family. It’s so exciting. And we get into some righteous grooves and funk. That was the thing about Jam Factory. We weren’t a jam band — they weren’t calling bands that then — but a song would turn into a 15-minute marathon. We still love to do that.”

The Hoffmann Family Band will perform a free show on Aug. 12 during the Liverpool is the Place concert series at Johnson Park, corner of Route 57 and Vine Street, Liverpool.