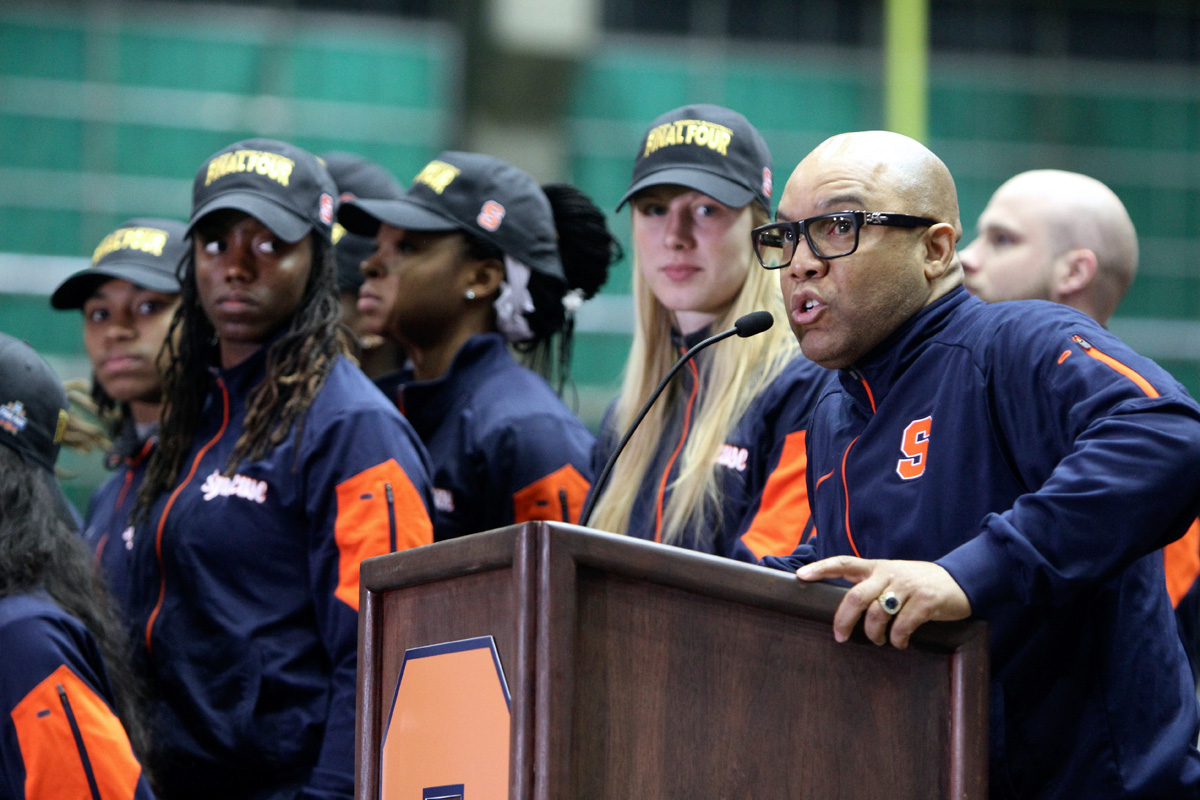 In addition to turning this March and early April into one big basketball party in Central New York, the Syracuse University men’s and women’s basketball teams taught their fans and this community that Yogi Berra was dead on: It ain’t over ’til it’s over.

The men’s team was left for dead several times this season, most recently on March 9 in the Atlantic Coast Conference Tournament. That’s when Trevor Cooney’s 3-point attempt at the buzzer fell short as the Orange suffered a heartbreaking 72-71 loss to Pittsburgh that seemingly knocked SU out of the NCAA Tournament.

And after getting blown out in back-to-back games to national powers Notre Dame and Louisville in late January, the women’s team appeared destined for another year of being good enough to make the NCAA Tournament, but not nearly good enough to challenge for the title.

But as March turned into April, both teams were still standing in the Final Four following the most improbable tournament runs in the history of both teams. The men’s season ended Saturday, April 2, with an 83-66 loss to ACC rival North Carolina in the national semifinals, while the women reached the Tuesday, April 5, national championship game against Cicero-North Syracuse High School product Breanna Stewart and the mighty Connecticut Huskies.

“I think we were just at a crossroads (in late January) where we needed to win some big games,” SU women’s coach Quentin Hillsman said before the Final Four. “And we just really sat down as a program and said, ‘What are our goals?’ And our goals were and are to be where we are right now: to be in the Final Four and trying to win a national championship. And I think that we just came out of that room and just said, ‘Hey, what’s the path to getting to it?’’’

The path for the SU women started in the wreckage of those ugly back-to-back losses to ACC foes Notre Dame and Louisville. In losing by 28 points to Notre Dame and 18 to Louisville, the Orange never held a lead.

From a physical standpoint, Hillsman decided to give his players more rest between games so they could maintain their frenetic pace during contests. From a mental standpoint, the coaches and players had to make a commitment that it was important for them to win those big games.

“It was a wake-up call,” redshirt junior guard Brittney Sykes said. “We can’t allow ourselves to not play hard and disappoint ourselves.”

After that loss to Louisville, the Orange won 16 of its next 17 games before the national championship game to reach 30 wins for the first time in school history. Along the way, Syracuse defeated four ranked teams, including Louisville in the ACC Tournament and No. 2 South Carolina in the Sweet 16 of the NCAA Tournament. Before this season, the Orange had never reached the Sweet 16, but wins over South Carolina and traditional women’s power Tennessee propelled SU to the Final Four.

And in its first-ever Final Four game on Sunday, April 3, the No. 4 seed Orange destroyed No. 7 Washington 80-59 as SU set a Final Four record with 12 3-pointers. Brianna Butler sank four from beyond the arc as she set the NCAA single-season record with 128 3-pointers on the season.

“We entered this tournament with great expectations of being able to possibly be here (in the Final Four),” Hillsman said. “I thought our kids started to compete really well the second half of the season. I give our kids so much credit just for being tough and for toughing out some of these games.” At the start of this season, the expectations for the men’s team were relatively low. Fifth-year senior Michael Gbinije was in his first year as the starting point guard, center DaJuan Coleman was returning after missing two years with knee injuries, and the Orange didn’t know what it would get from freshmen Malachi Richardson, Tyler Lydon and Frank Howard.

A 6-0 start was soon dashed by a seven-week stretch in which the Orange went 4-7 overall (with head-scratching losses to Georgetown and St. John’s) and 4-5 under interim coach Mike Hopkins as head coach Jim Boeheim served his NCAA-imposed nine-game suspension. SU’s only wins during that period were against Colgate, Cornell, Montana State and Texas Southern.

After losing to North Carolina in Boeheim’s first game back to fall to 0-4 in the ACC, SU won eight of nine with key victories at Duke and against Notre Dame at the Carrier Dome. But just when it seemed like the NCAA Tournament was a lock, the Orange dropped four of its last five regular-season games and that ACC Tournament game to Pittsburgh — a loss that most “bracketologists” predicted would keep SU out of the March Madness dance.

But thanks to regular-season wins over Texas A&M, Connecticut and Duke, the SU men’s team squeaked into the NCAA Tournament as a No. 10 seed. While that upset many national college basketball followers (ESPN’s Mike Greenberg said this season would be “a joke” if the Orange won the national title), the Orange proved the NCAA Tournament Selection Committee was right by defeating No. 7 seed Dayton, No. 15 Middle Tennessee, No. 11 Gonzaga and No. 1 Virginia to reach the Final Four. The Orange rallied from an 11-point first-half deficit against Gonzaga and a 15-point deficit with 9 ½ minutes remaining against Virginia.

Against North Carolina, the Orange sliced a 17-point deficit to seven midway through the second half, but the magic ran out against a talented Tar Heels’ team that was ranked No. 1 to start the season and earned a No. 1 seed in the NCAA Tournament after winning the ACC regular-season and tournament championships. While it was a disappointing loss, the Orange had already shocked their fans and their coach by reaching the sixth Final Four in school history and becoming the first No. 10 seed to make it that far.

“I told the players after the (North Carolina) game that I’m really proud, more proud of this team than I think any team that I’ve ever coached,” said Boeheim, who just finished his 40th year as SU’s coach. “It would have been very easy to have a horrendous year this year, all things considered.”

And why didn’t it turn out that way? “I just think they had a little heart,” Boeheim said. “I give my team a tremendous amount of credit for being able to do what they’ve done. I’m going to be like a football coach now and I’m going to have to look at the tapes more closely to figure out how we got here, because I’m not really sure.” Boeheim won’t have to watch any tapes to know the expectations will be higher for his team next season, particularly if Richardson puts the NBA on hold and comes back for his sophomore season. Lydon has already said he’s going to return, so if Richardson joins him the Orange will have replacements for Gbinije and Cooney, with Howard at the point and Richardson at shooting guard. Lydon will be able to spend all of his time at his natural forward position with 7-foot-2 center and Providence College transfer Paschal Chukwu available next year to spell Coleman at center. And power forward Tyler Roberson will also return with his potential to record a double-double every game.

The Orange’s recruiting class is ranked among the best in the nation, with 6-5 guard Tyus Battle and 6-8 forward Matthew Moyer already signed to play for the Orange. That class could get even better if 6-10 center Taurean Thompson, a top 100 recruit, picks Syracuse over Georgetown, Seton Hall and Providence.

So it’s no wonder that when Boeheim was asked for about the millionth time if he was going to retire after this incredible run, he said he wasn’t about to quit now.

Last Laugh: Trevor Cooney’s love-hate relationship with SU fans ended on a high note as the fifth-year senior guard enjoyed a strong NCAA Tournament and scored 22 points in the Final Four loss to North Carolina. Cooney finished his career with 1,437 points in 141 games and is the only Orange player to play in two Final Fours.

“I was very fortunate to be part of the Syracuse family for five years and I wouldn’t trade it for anything,” Cooney said. “And this was a hell of a run to go out on.”

Now that the Final Four is finished, it’s time for baseball and the Syracuse Chiefs aren’t wasting any time jumping into their promotional schedule.

The Chiefs will open their 2016 season on Thursday, April 7, 2:05 p.m., and Friday, April 8, 6:35 p.m., at NBT Bank Stadium with two promotional staples: $1 Thursday ($1 for hot dogs and Coca-Cola products, $2 for certain beers), and Fireworks Friday. This Friday was also supposed to be “Don Waful Day,” in honor of the former president of the team’s board of directors and the oldest living Syracuse University alumnus, who will turn 100 on April 8, but the ceremonies will be rescheduled for later this spring.

From Bryce Harper Bobblehead Day to Star Wars Night, the Chiefs will have one or more promotions for all 72 home games this season. For a complete list of the team’s schedule and promotions, visit syracusechiefs.com.

“With giveaways, fireworks and awesome entertainment acts, every night is an event night at NBT Stadium,” Chiefs third-year general manager Jason Smorol said in a news release. “We’ve listened to our fans for two years and we will continue to give people want they want: a family-friendly and energetic atmosphere every night!”

After winning the International League’s North Division title in 2014, the Chiefs finished a disappointing 66-78 last season under manager Billy Gardner, who returns for his third season as Syracuse’s skipper. Syracuse is the Triple-A affiliate of the Washington Nationals and feature the Nationals’ top prospect, shortstop Trea Turner.

Ticket information is available on the team’s website or by calling 474-7833.

Experiment Goes Down the Tubers
The Empire Strikes Back
To Top