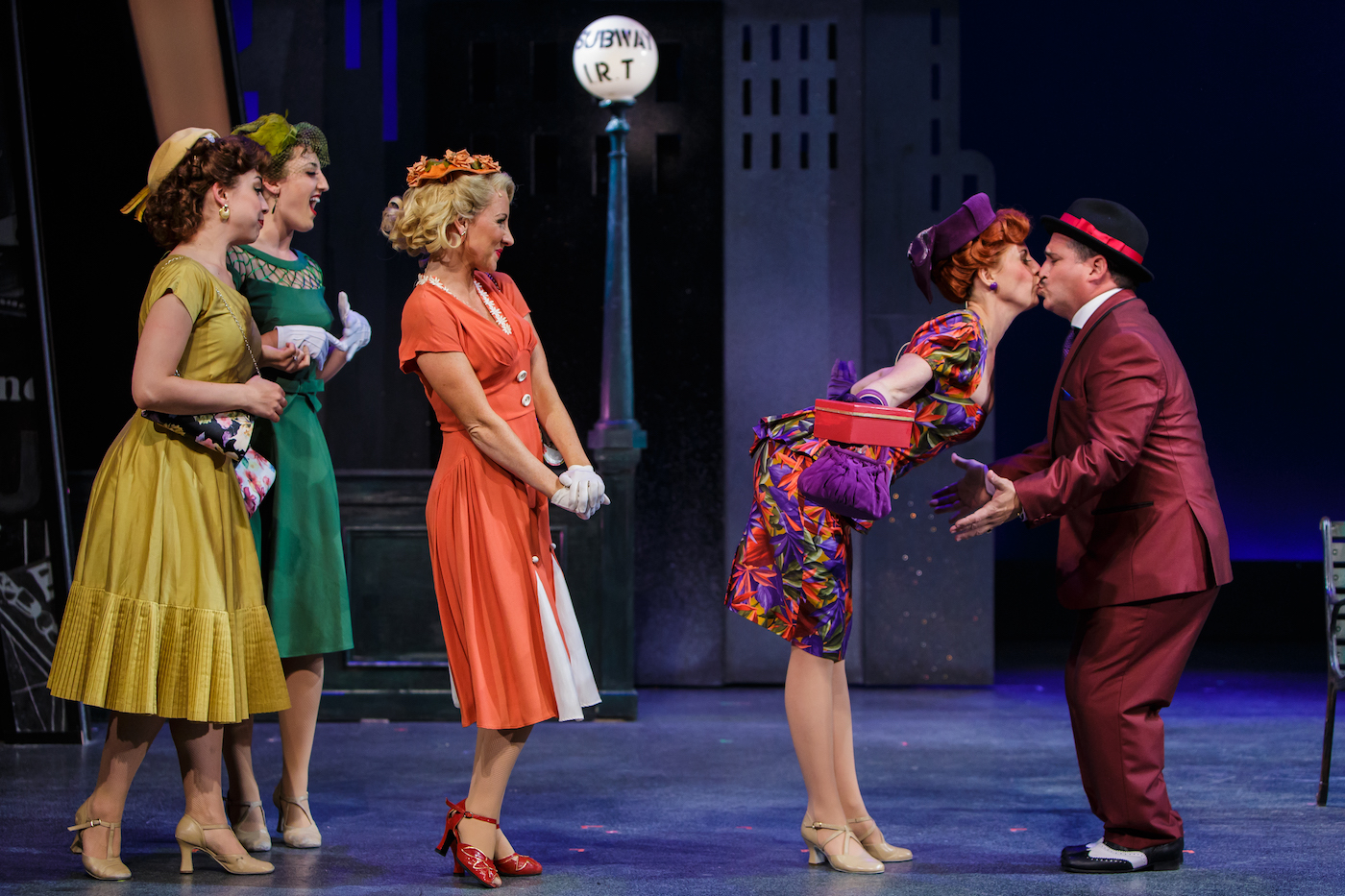 A refreshed “Guys and Dolls” returns to Merry-Go-Round after 22 years.

A hot new director makes a local debut in the launch of Merry-Go-Round Playhouse’s summer season. Arriving in Auburn is director-choreographer Richard J. Hinds, a man with golden national credits whose previous assignment linked him to Come From Away, the surprise hit that competed strongly in the recent Tony Awards.

His assignment here is to freshen up Frank Loesser’s Guys and Dolls (running through Wednesday, June 28), one of the greatest American musicals of all time, not seen at MGR in 22 years. His approach is to heighten all the show’s existing strengths while making all the dance numbers more exuberant.

Together with scenic designer Shoko Kambara and costumer Tiffany Howard, Hinds conceives this show as a kind of urban fantasyland, where grit is replaced by stardust. The slangy title “guys” and “dolls” points to but also mocks the lowlife street people Damon Runyon wrote about 80 years ago, Gamblers and chorus girls who are evangelized by the Salvation Army. Would-be law-breakers (merely crapshooters) are dressed in pastels. The stage is framed by two stylized proscenium rectangles, much like what you might have seen in period ads for the DeSoto or Studebaker.

Guys and Dolls appears to be, as many observers have argued, a perfectly constructed show. Consider the judicious placement of novelty numbers like “A Bushel and a Peck” and “Adelaide’s Lament,” so soon after the romantic female lead’s admission of yearning, “I’ll Know.”

This means that while all four players are superbly cast, Julie Cardia as Adelaide wins top plaudits. A frequent MGR performer and multiple nominee at the Syracuse New Times Syracuse Area Live Theater (SALT) awards, Cardia brims with wicked sauciness in “Take Back Your Mink,” the mock striptease blowing open the beginning of the second act. This is a production number backed by the women’s chorus, her fellow dancers at the (nudge-nudge) Hot Box Nightclub. She also fires up some of the often neglected numbers, such as “Sue Me,” a duet with Nathan, and “Marry the Man Today,” a duet with Sarah.

As the shortest member of the company, Carlos Lopez’s Nathan Detroit enters with a kind of Danny DeVito assertiveness. But director Hinds and Lopez are mindful that Nathan keeps refusing his promise to Adelaide and thus reap comic rewards by having him evade, running rather than fighting. Even though the movie version is now 62 years old, Lopez shows us that Frank Sinatra’s Nathan had it all wrong.

Traci Blair and Michael Lomenda bring top-notch Broadway voices to the Loesser immortals. In her opening numbers, “Follow the Fold” and “I’ll Know,” she could easily soar up to the demands of opera. Taller than other Sarahs, she’s also a limber actress, convincing us that the stiff-necked prude can cut loose in pre-Castro Havana with a Bacardi milkshake in “If I Were a Bell.”

Lomenda’s baritone leads in the love duets at the end of the first act, “My Time of Day” and “I’ve Never Been in Love Before.” A shot of him in the white silk suit he sports in the second act would make a worthy representation of the entire production. Then again, his peak moment is his solo in the big production number, “Luck Be a Lady.”

Although the name of original 1950 choreographer Michael Kidd can be spoken of in the same breath as Bob Fosse and Jerome Robbins, Guys and Dolls is not usually thought of as a major dance show. Richard Hinds changes that perception with the opening numbers, especially the witty parody of Johann Sebastian Bach in “Fugue for Tinhorns,” beginning with the immortal lyric, “I’ve got a horse right here/ His name is Paul Revere.”

Hinds’ greatest moments come in the middle of the second act with the “Crapshooter’s Ballet” and “Luck Be a Lady,” enhanced by the smoke-catching lighting design of Dan Ozminkowski.

Tenor Jefferson Behan as Nicely-Nicely is an eye- and ear-catching presence throughout the show, notably his leading of the title number, “Guys and Dolls,” and reaches its climax in the show-stopping mock-spiritual, “Sit Down, You’re Rocking the Boat.” With Guys and Dolls’ showcase of impressive performances and spirited direction, this golden oldie is restored in all its luster.