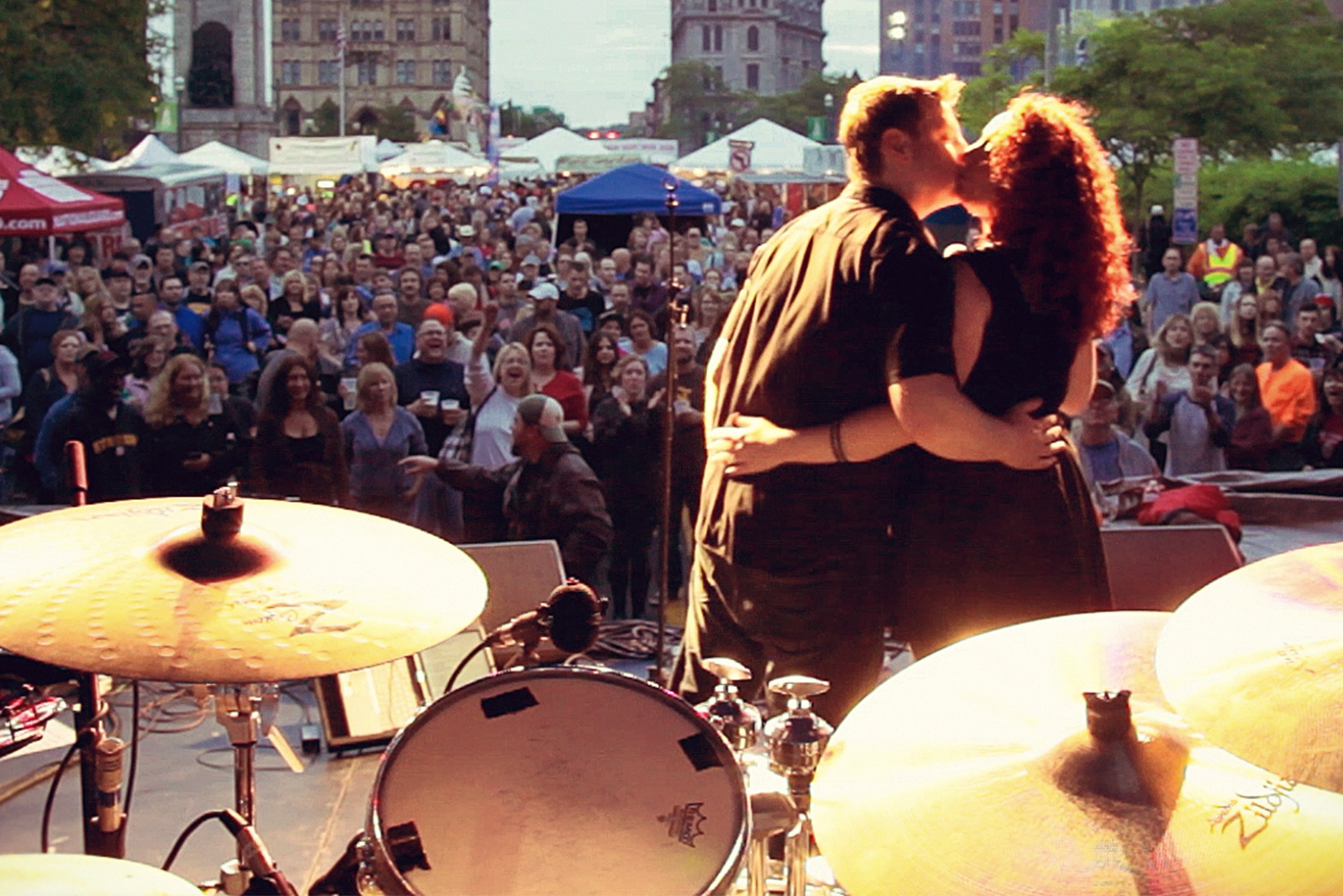 Albums have a way of reminding listeners of a time period, whether it’s the era of the LP’s release or the first moment they heard it. In 2010, married musician couple Bob Kane and Robyn Stockdale capitalized on the concept of mixing and matching local musicians to recreate entire albums that people loved.

The arrangement, titled Vinyl Albums Live, benefited everyone: Audiences could enjoy songs they knew, while area musicians could work with other talents to reach different listeners. The first show on Jan. 9, 2010, played to an overflowing house at Mac’s Bad Art Bar in Mattydale, with subsequent shows at Taste of Syracuse and the Lost Horizon. Eastwood’s Palace Theatre will host the next triple bill on Saturday, Jan. 23, which will feature The Eagles’ Hotel California (1976), the Rolling Stones’ Sticky Fingers (1971) and Bruce Springsteen’s Born to Run (1975).

“It’s phenomenal to see it all come together,” Stockdale says. “We start in the summer, picking — or arguing — about albums. Then we start picking musicians, gauging interest. We start rehearsals in the fall and rehearse bands every week from November to January. It’s a lot of beer and maintaining day jobs! It’s a huge part of our lives and a labor of love.” Kane and Stockdale have organized shows featuring everything from Alanis Morissette’s 1995 Jagged Little Pill to Blind Faith’s 1969 self-titled album. While Kane takes on much of the musical direction responsibilities, Stockdale heads marketing, advertising and design. She also gathers sponsors for the events along with Kathleen Mason of KMase Productions. Sandra Jackson of Sublunar Studios also helps with video and photography.

The couple are proud of what makes their album re-creation concerts stand out from the rest. “The key difference between the traveling shows and our own is that we use all local players,” Kane says. “We started with The Barndogs when we brought them in to play L.A. Woman. They already did a lot of Doors tunes and learned the obscure songs. After they did that show, more people came to see them in the bars at their own shows. It’s great bringing familiar musicians to the stage, and awesome helping lesser-known musicians get noticed.”

Musicians are given the opportunity to play new material with new people, sometimes creating relationships that lead to much more. “At the first rehearsal, you get to see who knows each other,” Stockdale says. “Some musicians have been playing in the scene around each other for years, but never met face to face. Now they get to play together. It’s such a cool moment and makes for a whole new chemistry.”

Teaming veterans of these shows with newcomers offers another plus. “When I can’t be around for rehearsals, I can count on the veterans to let me know how things are going,” Kane says. “I can delegate and make sure everyone does what they need to do.”

Kane and Stockdale also work to include a mix of Vinyl Albums Live songs at various musical showcases throughout the summer, including a set at Taste of Syracuse. They also add a finale song to each event, bringing as many musicians to the stage as possible.

“We always pick a song with a positive vibe,” Stockdale says, “like ‘Hey Jude’ or ‘With a Little Help From My Friends.’ We always pick from the same time frame as the other albums, but not the same artists being performed that night. Most of my favorite moments from the shows are the finale songs.”

This January’s climactic track promises to be no exception, although it will be kept a secret until it is performed. “It’s not even listed in the program,” Stockdale says. Guests for this year’s farewell include Bill Ali, Maureen Henesey, Joanna Jewett and Lisa Romano. This year’s trio of albums have proven the most complex so far. “Logistically, with players and equipment, these are the most difficult,” Kane says. “We have five keys players, two drum sets, a horn section, strings. We want to raise the bar every year. Musicians want the challenge. They rise to the occasion.”

The show will also benefit Signature Music, the local nonprofit that helps provide music education to teens of all backgrounds. One dollar from every ticket will go to the organization, as well as money sold during the evening’s raffle and from three “Signature Drinks.”

“We do it because it’s good for the scene,” Stockdale says about Vinyl Albums Live. “This collaborative movement is the best thing for the town. The collaborations are good and people can walk away with the music ringing in their ears knowing we have so much talent here and that Syracuse is awesome.”

A Shop for Local Artisans
Quantum of Feelings
To Top