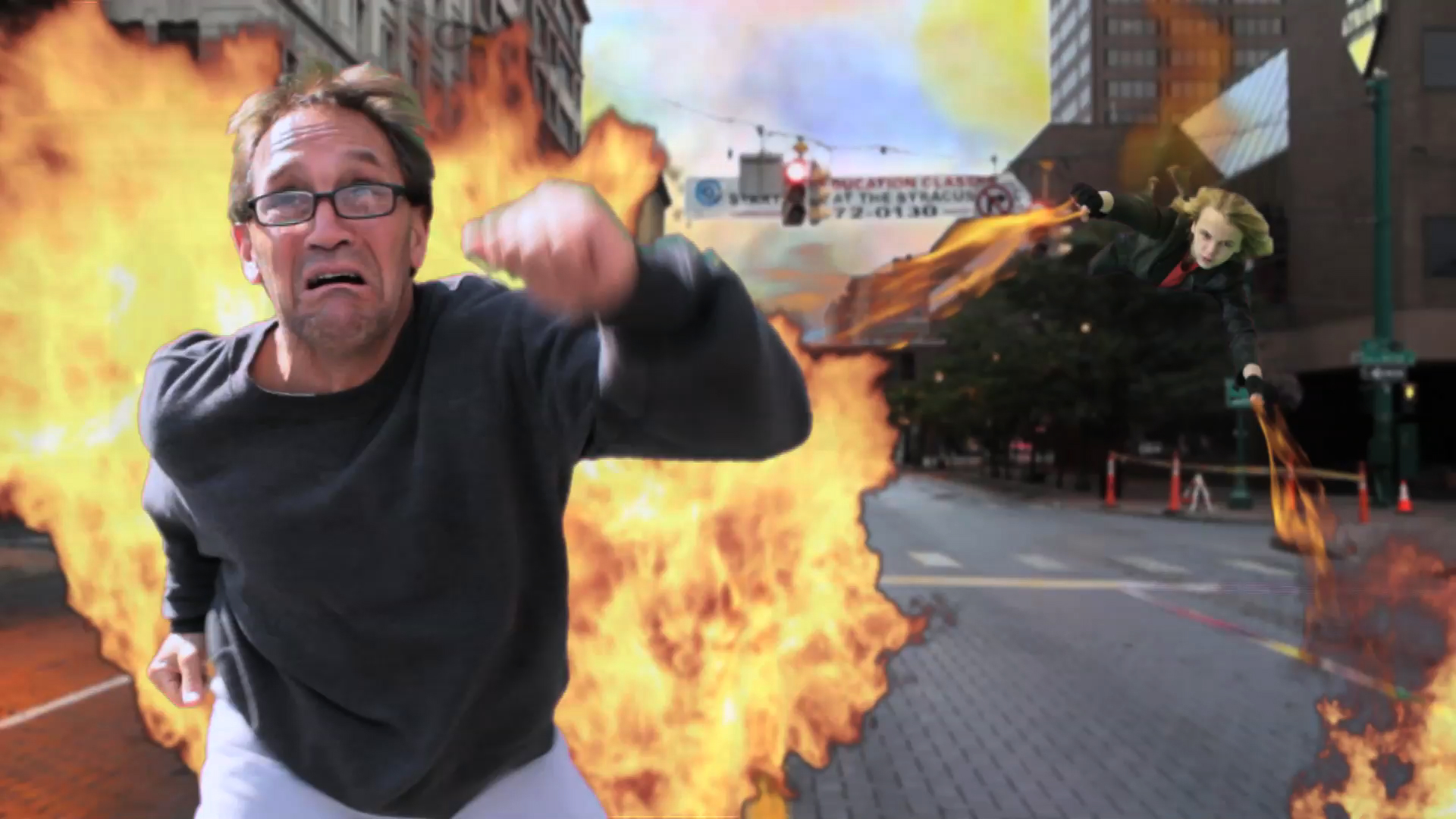 In a world full of superheroes, where does the average police officer fit? And what happens when one of these cops stumbles upon a conspiracy big enough to shake an entire city?  Enter Officer Pigsley.

These are the questions co-directors Kevin Losani and Michael Widger set out to answer in Officer Pigsley, which is ready for its close-up Tuesday, Dec. 19, at Eastwood’s Palace Theatre.

The film “speaks to the true heroism that’s not about the fame and glory,” said Widger, who around 2007 won Syracuse Area Music Awards (Sammys) in his rapper guise DooWiTTle.

The producers call their action comedy a “dark, twisted thrill ride.” The trailer shows a collage of shots featuring underappreciated Officer Marvin Pigsley (Jody Pucello) as he tries to do his job in fictional Cusetown while being bested by flying superkids. Widger said there’s a theme of self-sacrifice that should leave viewers rooting for Pigsley as the film goes on.

The feature has been in development for about three years and was shot throughout the city of Syracuse and surrounding suburbs, Widger said. Although the movie was supposed to wrap earlier, the amount of post-production visual effects set them back. Yet he believes these images are what make Officer Pigsley one of the most ambitious flicks made locally.

Every sky in the movie is replaced by watercolor paintings made by Widger’s grandmother. A slew of green-screen explosions, flying vehicles and one scene of Syracuse’s iconic State Tower building being torn in half are seen in the trailer.

Widger also cites the number of authentic stunts in the film. The shooting schedule began before the Federal Aviation Administration cracked down on drone use, so Widger said many of the aerial shots over busy downtown Syracuse streets would be more difficult — if not impossible — to get in the present day. They also had an actual helicopter that flew near South Warren and Harrison streets, and several retired police cruisers on hand as Cusetown cop cars.

The film originally had a $2,000 budget, but with the number of things the moviemakers were able to borrow, have donated, or do themselves, such as costumes, sets and film editing, both Losani and Widger estimated Officer Pigsley probably would have cost closer to $10,000 to create.

“We challenged ourselves to really think limitlessly,” Widger said.

Officer Pigsley screens Tuesday, Dec. 19, 8 p.m., at the Palace Theatre, 2384 James St. Doors open at 7 p.m. with music from the film played by local alt-rockers Professional Victims. Admission is free, although the filmmakers suggest that the movie is for mature audiences. For information, visit palaceonjames.com.