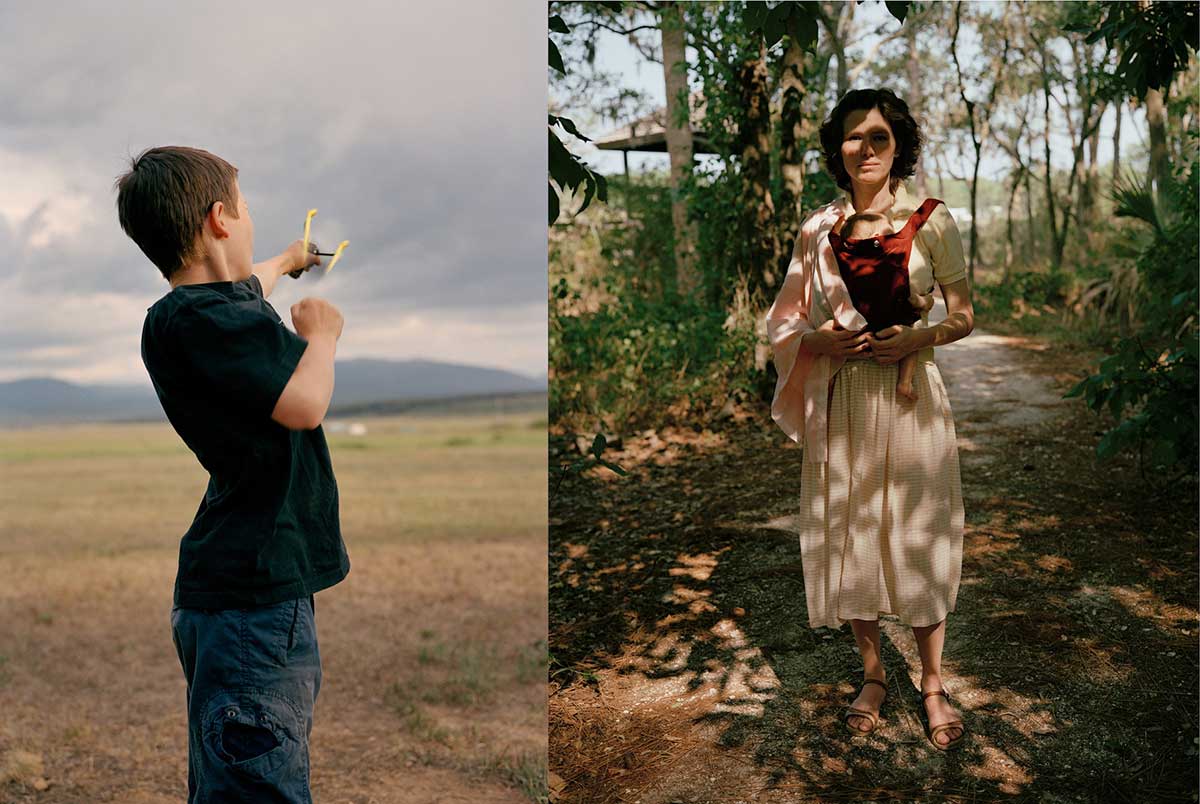 Robert Benjamin doesn’t alter his photos for artistic purposes or ask his subjects to write comments on the prints. He hasn’t earned a fine-arts degree or received any instruction in photography. Even though he took photos for several decades, his work wasn’t exhibited in public until 2010 when the Denver Art Museum hosted his first show.

And yet River Walking, a retrospective of Benjamin’s images and poems, is being displayed in the Light Work Gallery on the Syracuse University campus. This is a space that has showcased dozens of photographers doing work ranging from documentary projects to glimpses of the New York State Fair and series exploring personal identity.

Benjamin, meanwhile, embraces everyday scenes: his wife, Pamela, standing next to the family dog on a winter day; a restaurant’s front window with lettering promising Vietnamese coffee; his son, Walker, having a moment of joy in the desert, as the young boy unleashes what looks like a slingshot. In addition, Benjamin celebrates nature: plants in the desert near Baja, Mexico, thick grasslands, the trees that dominate several images.

The photos, which include Polaroids, chromogenic prints and archival pigment prints, were taken over four decades. Among other things, they document Benjamin’s ability to capture a moment. In a kitchen scene, sunlight beams into the room just as a pot on the stove boils. In another desert scene, Walker dips his hand into water as dark clouds appear on the horizon. The moment of discovery contrasts with shifting weather.

Clearly, the exhibit rejects the notion that life at home is necessarily boring or inconsequential. Benjamin photographs flowers just outside the house, a shelf containing clay vessels, flowers and a statue of the Buddha, a room with a blackboard and old-style turntable. Such images help anchor the show, as they communicate an essential point: It’s possible to find beauty in ordinary surroundings.

At the same time, the show returns again and again to Benjamin’s family. In a panoramic shot, Pamela and Walker, with their shoes off, walk in shallow water. Roughly 20 feet away, other adults and children do the same. Another image depicts Walker as a young boy, with his shirt off and a pencil in hand. He ponders something; the viewer can only speculate. In a third image, his sister, Nellie, stands by a tree.

What distinguishes such images from the snapshots taken by people all over the United States? First, there’s timing, Benjamin’s ability to grasp a moment. Second, he’s able to energize a photo through textures of light. Third, his work centers on point of view. He’s committed to photographing specific subjects and clearly enjoys that work. There’s little interest in public recognition. Benjamin does show his work from time to time, but he operates largely outside the art world.