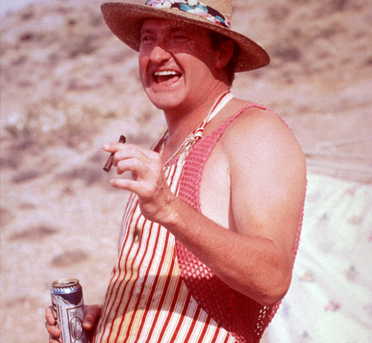 In and out of the kitchen on a hot day.

Hey, Heat Wave, welcome back to Central New York. How have you been?

How many of you Syracuse dwellers have been complaining? Oh, don’t be bashful, because you know that we know that you have. This is the weather that shouldn’t be wasted. It’s officially summer, and the amount of daylight is diminishing, well, daily. Next thing you know, it will be August and the early Christmas push will shine brightly like the North Star on September 1.

According to News Channel 9’s forecast yesterday, meteorologist Jim Teske stated that the temperature would be hotter than blazes (and this statement was complete with a knee slap and a flash of pearly whites). Not to worry, though, the news channel’s event page was promoting the regional weekly summer event, BBQ Tuesdays at Cousin Eddie’s. Bring your own Busch.

While growing up, days like this had us kids getting booted outside (complete with slathered-on sunscreen) by our parents, hitting the pavement with our bikes, and creating havoc with water guns. We can’t forget the hoses and beloved sprinklers. Sometimes we’d get away with complaining that it was too hot and being able to sit in and play some video games. However, vitamin D levels need to be recharged and stored for the length of the winter. All this was realized when stepping out for a quick run this morning and saying, “Um, no.”

Of course, this type of weather allow us to want to want to be outside while the not-so-audacious stay inside and set up shop in air conditioning or next to a fan. In the Malone abode, the house that I grew up in, the longstanding tradition has been to cool down the house with a series of fans. The contraption that I’ve set up has just collected the air from all of your gasps, so my parents will survive with those the remainder of the summer.  This acceptance of heat will thicken your skin. And this makes it easy to get out into the world enjoy what the area has to offer: hiking/camping, playing games, day road trips, going for a swim, and/or just kicking back. Staying out of the kitchen is always a plus, but eating out cannot be an option all the time.

Here are three resolves to life in the kitchen on a hot Syracuse day, and your getting out as quickly as possible.

Salads are not boring in my opinion. What is easier than chopping up veggies and adding them to a bowl of crisp deliciousness. However, Wegmans makes cooking stupid simple with giving you packaged pre-chopped veggies to add to your greens, and you could even create your salad on the car on the way home.

With the grocery chain constantly switching its goods around on us customers, you may not find these packaged goods easily … so, check by the rice and international food.

Throw in some spinach and basil with your lettuce, tomatoes, peppers, onions, cheese, or whatever else you’d like to throw in there with a balsamic vinaigrette dressing, and you are good to go. Throw some chicken or steak in there, and you have a hearty and healthy option for a meal.  Elaine would be jealous. #2. Bring on the Noodles

Where Italian pasta dishes can mount up to a load in your tummy, go Asian and have a filling meal without the regret.

The other night, I was treated to a delicious meal that filled me up perfectly.  There are some Italian dishes with sauces (or gravies) that are light and easy on the conscience and won’t catalyze the sweats.  Throwing some steamed broccoli, onions, red and sweeter peppers will go deliciously well. The sauce was made with an undisclosed amount of peanut butter, sesame oil, soy, rice vinegar, brown sugar and garlic chili sauce.  You can, if you so choose, add your choice of meat for a more filling dish.

It also goes will with a Red Hook Longhamer IPA. #1. Throwing Your Hands Up

Sometimes, you do have to say, “To hell with it …”  Especially if you are taking a day trip, cooking out may not be on your mind unless you are holding a picnic or you’re camping; ovens, grills, and open flames are limited otherwise.  So, it’s a night to eat out.

This weekend wine tasting we did go, but not in the same fashion as bachelorette parties or drunk buses. It was a Sunday to actually taste the wines. Ventosa Vineyards in Geneva, New York, greets you at the top of Seneca Lake or waves goodbye (depending on the direction you are coming from). The beautiful winery has a room for banquets and weddings aside its Tuscan-themed tasting room and cafe.  Aside trying and enjoying the samples of wine, the food was also enjoyed. Ventosa has quite the setup.

The Pizza Roma special was wood-stove-baked to its crispy crust perfection with tomatoes, basil, and fresh mozzarella. The Ventosa Deluxe Panini was built with a wonderful three-meat trio: sliced prosciutto, Genoa salami, and capicolla. Roasted red peppers and onions were held between the pressed bread with five cheeses, and the sammy was topped off with Ventosa’s house dressing. This was served with a pile of chips. And, yes, it was consumed with San Pellegrino.

The rest of the day was spent with quick trips to King’s Garden Vineyard, a small venue that has some of my favorite New York reds. Two breweries were hit up: Wagner and War Horse Brewing Company, which is part of the not-so favorite Three Brothers. A growler was brought to Wagner, but the porters were sold out — dang it! War Horse was disappointing this time around. The once-enjoyed Riesling Ale tasted too sweet and overly grapey unlike the past. At one point, the subtlety of the grapes was appreciated, but the abundance of the flavor didn’t settle with me this time around. The IPA tasted better than it has in the past, and the Royal Kilt Inspector Scotch Ale is applaudable due to its uniqueness and overall taste.

My date can toot my horn with suggesting to the bartender that he should try 1911’s hard cider. This was kindly suggested and referred to him after he served the brewery’s hard cider slushie. I opted out of this, due to my reluctance with tasting ciders … and being at Three Brothers. He made the “mistake” in saying that ciders, especially Woodchuck, is the latest craze. He seemed to take my suggestion with a grain of salt, after my stating the apple juicy content of the mainstream ciders. But then, that’s Three Brothers …

Don’t want to go all that way east? Stop in Skaneateles and head to the LakeHouse Pub. The pub is gaining notoriety for its roast beef sandwiches (half-priced on Monday) and homemade slap-your-tastebuds horseradish. Craig and I hit the pub up for lunch, soccer, and to solidify another reason why a venture out to Skaneateles is so worthwhile.

Beat the heat, folks, and satisfy your stomachs from despair. You may even have room for that lovely ice cream treat for dessert. Get ready for a bigger and better Side Hill Farmers Meats and Market
Why Is Your Dinner Online?
To Top