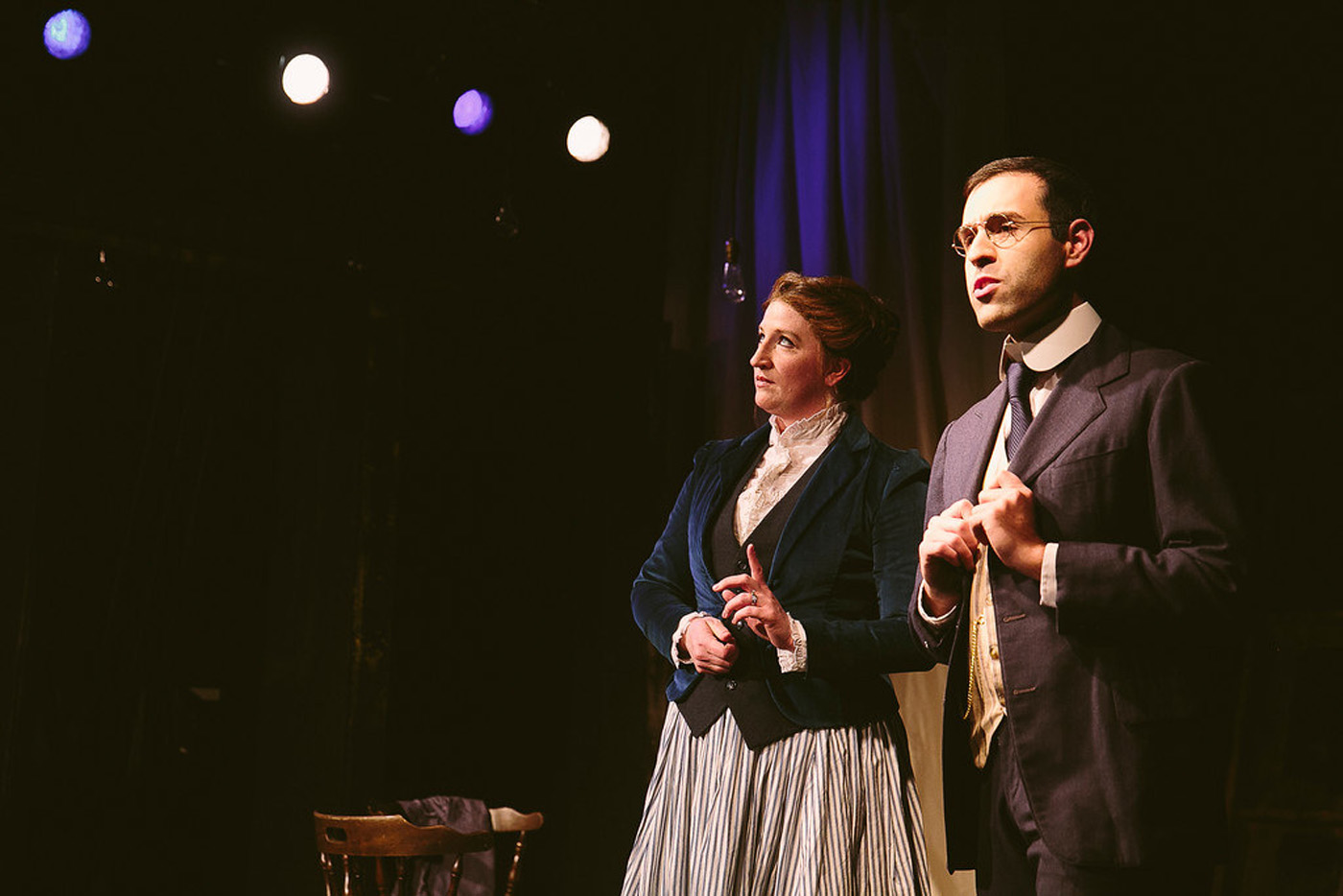 First-time director Liam Fitzpatrick succeeds in production of “Our Town.”

When a first-time director undertakes such a familiar property as Thornton Wilder’s Our Town, you can be sure he wants to do something different. The results are on display in the current Central New York Playhouse production.

The central paradox of the play, the plainspoken fused with the adventuresome, continues to keep it startling after all these years. We have the lives of ordinary, small-town New Hampshire Protestants presented in a vehicle inspired by Wilder’s advanced European contemporaries, including Luigi Pirandello, Bertolt Brecht and James Joyce. But changing one key character shifts the tone of the whole, like putting a new filter on the lens of your camera.

That lens into Grover’s Corners is usually the detached narrator but now there are two. Both are younger and more engaged. And of different sexes.

Wilder called that narrator the Stage Manager. His first function is to banish conventional realism and remind audiences of the artifice they are encountering. He tells us what the bare stage leaves out, like who lives on the right or the wrong side of the tracks, without any hint of editorial judgment.

To give his words the resonance of history, the Stage Manager is usually a role for a smooth-talking guy of advanced years. Recently both Paul Newman and Hal Holbrook mesmerized audiences while in their 80s.

In his program notes, director Liam Fitzpatrick generously acknowledges that he has precedent for splitting the Stage Manager in two persons. More audacious are his casting choices.

The first Stage Manager is the dark-browed Abel Searor, the ubiquitous music director who has already earned two Syracuse New Times Syracuse Area Live Theater (SALT) awards but not for speaking roles. With his high starched collar and proclivity for frowning, Searor’s articulate Manager is a reminder of mortality for a drama that ends in a cemetery.

Opposed to him, like a comic mask tilted toward the tragic, is the sanguine Erin Williamson as the other Stage Manager. Although she has played terrifying villains, such as in Rarely Done’s 2010 production of The Shape of Things, Williamson is best known as an ebullient song-and-dance girl. Her presence is Fitzpatrick’s signal to us that although life is short, there are moments of joy, even ecstasy, that must be seized.

Having nearly two-dozen speaking roles, the very feature that makes Our Town popular with high schools, is a challenge for community theater groups. Fitzpatrick generally places his most experienced players in mature roles. Both the Gibbses (swain George Gibbs’ parents) and the Webbs (ingénue Emily Gibbs’ family) reside securely in Grover’s Corners’ professional class, but there are evolving differences between them. Doc Gibbs (Rob Searle) is an earnest, solid citizen but his wife Julia (Kathy Egloff) has never shaken off the wanderlust of youth and has been saving up for a possible trip to Paris.

In a town admittedly bereft of the fine arts, the newspaper-owning Gibbses might appear to be literati. Certainly editor Charles Webb (J. Allan Orton) is assigned more than his share of the show’s wittier lines. Orton, so remarkable as Biff in Central New York Playhouse’s March 2014 Death of a Salesman, is unhampered by appearing to be two decades younger than his character. Mrs. Myrtle Webb appears to be quieter and more domestic but Michaela Oney limns a subtle inner life for her.

If it takes a village, if not a town, to raise a child, Wilder also wants us to see the offspring as permutations of their parents. Young George Gibbs (Nic MacLane), who looks a bit like Keir Dullea, grasps tightly to the wonder of youth and is reluctant to take responsibility.

Pigtailed Emily Webb (Carleena Manzi) inherits the soulfulness of her mother and the wordsmithing of her father to become the emotional center of the drama. While the love scenes with George could use a little more electricity, Manzi has full command of some of Wilder’s best prose poetry.

Thanks to Fitzpatrick’s connections to the larger theater community, he has pulled in leading players from other productions for emphatic walk-ons here, notably Leila Dean as Mrs. Louella Soames, the exuberant witness at the wedding, and Ben Sills as the forthright Constable Warren.

For such an ostensibly bare-bones show, important contributions appear backstage, starting with Kate Kisselstein’s trunkload of period costumes. Ed Mastin’s dialect coaching guarantees better N’ampshuh accents than we heard in the recent primary in the Granite State. And the sound design from Rob Searle, Nic MacLane and Dustin Czarny ensures that the town choo-choo arrives on cue.

Opus is the New Black
Rocking Out
To Top