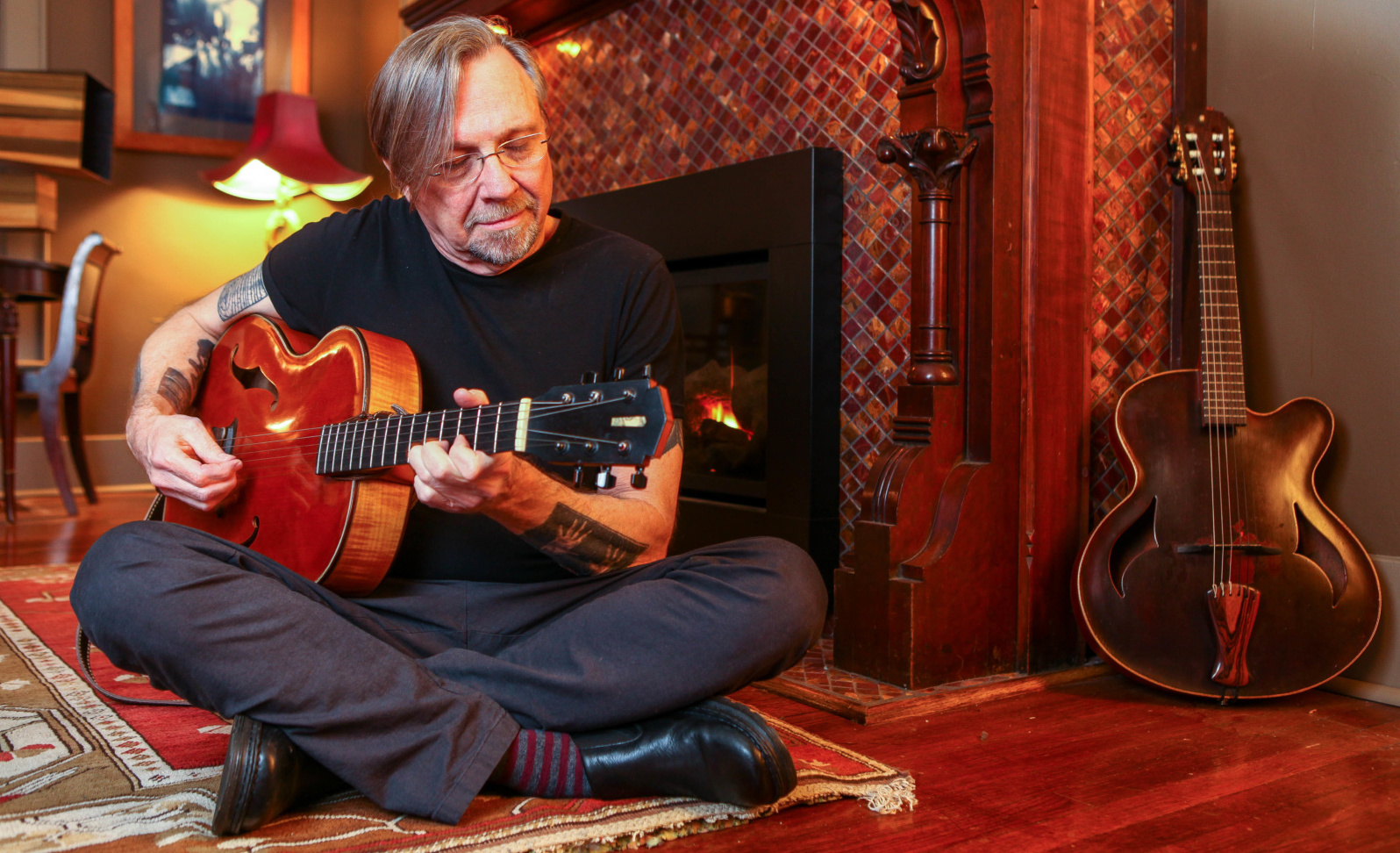 Enter Leo Crandall’s house in the Westcott Nation and be engulfed in a museum for stringed instruments, including an array of homemade timing pins and a piano harp from the 1850s mounted on a wall. Crandall spent several years as an arts administrator at the Everson Museum of Art and the Cultural Resources Council, the current CNY Arts.

With lyrics that tell stories and background music that makes you want to move right along with it, Leo Crandall’s new CD, The Art of Swimming, is a mix of folk and rock music. There’s a great variety of sound, and pleasant, soothing vocals. It has a distinctive throaty sound, suggestive of later Lou Reed with drum solos. But you can definitely hear the living room.

“There are other people playing on it, but basically it’s my work, my songs, my arrangements,” he notes. “I have a history of it. I used to do film scores. When I first got to town many, many years ago, I asked (local Syracuse International Film Festival organizer) Owen Shapiro if he had any students who needed a film score. I was working with (filmmaker) Cabot Philbrick, and I worked for many years with (the three-woman comedy troupe) Gams on the Lam. I’m more of a composer-arranger.”

Crandall’s reaction to his first experience with the production process established an attitude he has carried through his work. “When I went to do my first recording for the Gonstermachers,” he recalls, “we went to the recording studio and the engineer said, ‘You’re going to be in this room. You sit over here, and you sit over there, and we’ll all put headphones on.’ We took a couple of takes and I said, ‘This sucks. This is awful.’ He said we just had one way, and I thought, ‘If it makes your job harder for us to be in the same room, then your job should just be harder.’”

Bringing the process back home enabled a more relaxed, if raw, meeting point for the band mates. “I went through a massive analysis process,” Crandall says, “which is, We should be playing where we rehearse, which is where we’re comfortable. We should be playing with one mike. We should be finding the emotion we had when we started rehearsing, which was here (Crandall’s living room). We first played in 2003, then within the first two years we had our first CD, which was recorded here, in the house.”

Crandall describes his return to live performance as purely fortuitous. “I decided I wanted to sing and play again,” he says, “trying to turn myself into a singer and songwriter. Colin Aberdeen was doing open mikes. I asked Colin if I could borrow his guitar and he was very gracious, as he always is.”

Although the return to live performance and recording has gone well, Crandall has encountered trouble selling the new CD. It can be found for varying prices at a variety of outlets: $9.90 on Amazon and iTunes, locally at the Sound Garden in Armory Square or listened to for free on Spotify or the website leocrandall.com. Sound Garden also stocks a 33-rpm vinyl format.

“I’m a terrible marketer,” Crandall says. “I’m the worst there is. I get lost in the rabbit hole of the work. It’s very easy for me to spend four to six months on a quatrain. But I’ve always been a terrible self-promoter. Currently I’m in the middle of writing my next CD. I’m almost done writing it and started recording it. Its current title is Unknowable and Stunning Thing.”

Crandall currently teaches at Syracuse University and SUNY Cortland, from which some academe sneaks into his work. “I feel that in the last four months I’ve made some real strides,” he says.

“From my first solo record, 2010, a lot of my work as a translator has come back to me. Early in my life I was doing translations of the Roman poets, also translations of a lot of the Anglo-Saxon poets. A lot of this stuff found itself in my lyrics after 30 years or so. I think my basic approach at the time was essentially like a film editor. So I would have a certain idea and if it was like cutting three pieces of film the whole was greater than the sum of the parts.”

Crandall cites another advantage to his current work style as working with a lyric editor, Joellen Kwiatek, recent winner of the Iowa Poetry Prize and the Pushcart Prize. “We spend a lot of time talking about a song is not a poem,” he says.