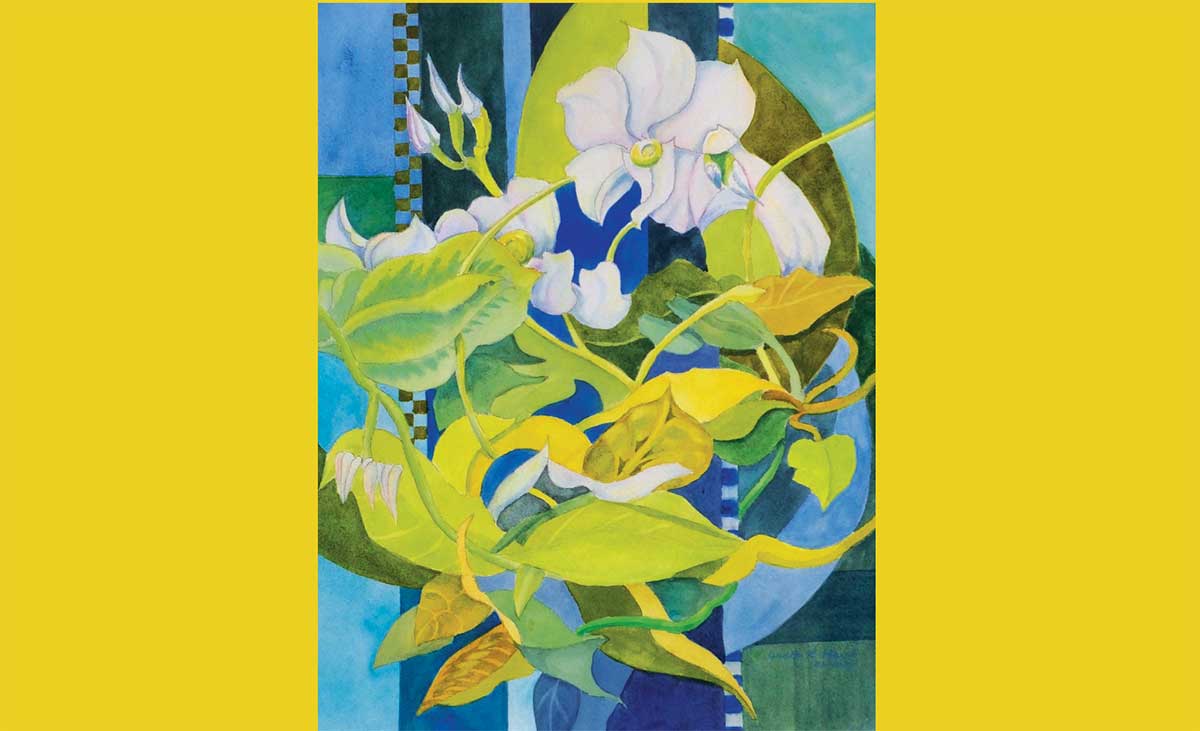 Judith Hand’s one-woman show Spring Is on the Way, running through March 29 at the Wilson Art Gallery on the Le Moyne College campus, offers a respite from snow, ice and chilly winds. The exhibit evokes a time when the weather is much warmer and flowers are blooming. Indeed, all of the paintings and drawings depict flowers: begonias, magnolias, roses and others.

The works also reflect Hand’s strategies for avoiding the same-old, same-old portrayals of flowers. She integrates geometric forms and stamp shapes into many of the pieces and uses other techniques such as repetition of imagery.

“Hibiscus Coming and Going,” for example, has both striking green and red colors and a circle pattern. In “White Mandevilla,” vines extend vertically through the painting. And the artist incorporates geometric forms and faint stamp patterns into “Hide and Seek.” Viewers don’t see every detail of an original stamp, just an outline.

The exhibit highlights other techniques for achieving variety. In “Birthday Rose,” a vase filled with flowers appears first in a full-size depiction and then twice more in formats showing parts of the vase. “Weeds from Woods” is split into sections divided into panels. One of the best works in the exhibition, “Rhodie Revolution,” has bunches of flowers wrapped around each other.

As might be expected in a show featuring flowers, Hand pays particular attention to colors. She contrasts black and green colors in “Maybe Magnolias,” places pink and blue colors on the border of “Flora,” and employs green, orange and red colors in “Orchid Fantasy.” The red in that painting looks like it’s dripping on canvas.

Elsewhere, the artist plays with moons and magnolias in one piece and displays several works, all of which are based on the same drawing of a hibiscus. The exhibition, and Hand’s statement, make it clear that she very much enjoys flowers and paying homage to them in her art.

The Wilson Art Gallery is one of several venues where Hand has displayed her work during 2019. She’s already taken part in group shows at the Fayetteville Library and the Everson Museum of Art, which hosted Re (Generation): Women Artists Over 60. The latter exhibition showed her depiction of a female Buddha.

Wilson Gallery is located within Le Moyne’s Noreen Reale Falcone Library. That gallery isn’t situated in a single room; artworks are presented on walls and pedestals throughout the first floor. They include not only exhibits like Hand’s but works from the gallery’s permanent collection, which are displayed on an ongoing basis. They include bronze sculptures by Jacqueline Belfort-Chalat and Maxwell Chayat, Juan Cruz’s painting portraying Dr. Martin Luther King, abstract pieces, and a print by Roland Woods Jr. depicting a marketplace in Liberia.

The gallery is open to the public during the library’s regular hours. For more information, call (315) 445-4323 or visit lemoyne.edu/library.