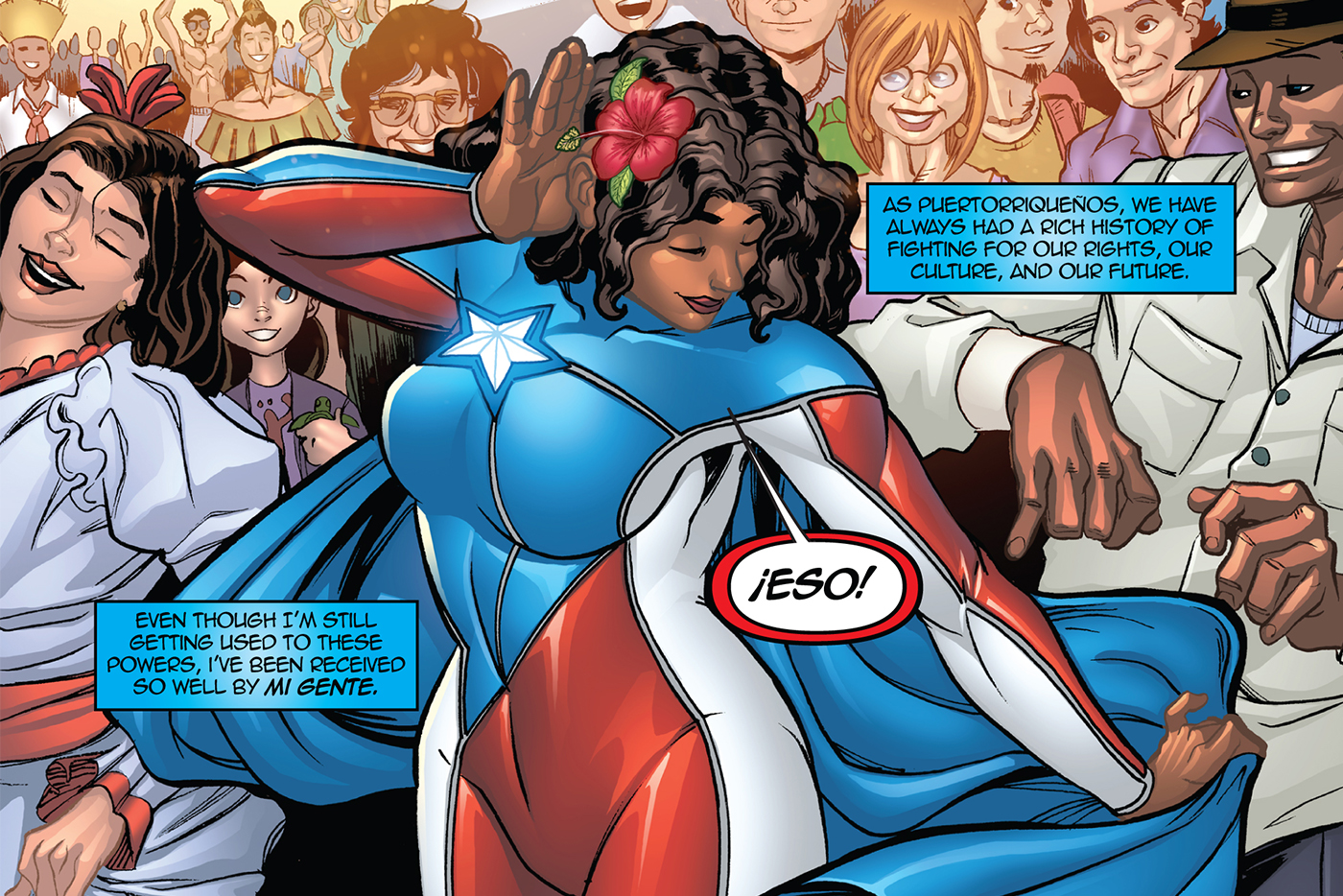 “I’ve never tried not to be a nerd,” he admitted in a phone conversation as he promoted his upcoming speaking engagement on Friday, April 28, at Syracuse University’s La Casita Cultural Center, 109 Otisco St., with a book signing from noon to 2 p.m.

This local stop is something of a homecoming for the writer, illustrator and editor-in-chief of Darryl Makes Comics, Inc. “I attended Fowler High School, entering in 1986, the same year the Mets won the World Series,” he recalled.

Miranda-Rodriguez graduated in 1989 as his class salutatorian, which helped him land a free ride to Colgate University. He now lives in the Williamsburg neighborhood of Brooklyn with his artist wife, Kyung Jeon-Miranda, and two sons.

His national tour primarily concerns La Borinqueña and its superheroine Marisol Rios De La Luz, but it’s more than that. “It allows me to be an advocate for Puerto Rico,” Miranda-Rodriguez said. The territory of the United States is currently plagued by a debt crisis, leaving its educational system in dire straits.

La Borinqueñas has exploded in popularity, for which Miranda-Rodriguez expressed gratitude regarding the book’s growing number of followers. He said that while comic book culture is really strong, the story lines fall short when it comes to tackling social problems. Many popular comics, like X-Men, often opt for metaphorical routes when exploring these issues.

Marisol Rios De La Luz is simply trying to live her life like any typical 21-year-old. She attends Columbia University in the Bronx, with a focus on environmental studies. When she leaves New York to visit her grandparents in Puerto Rico, her decision to explore caves results in her newly acquired powers.

When it came time to write the story, Miranda-Rodriguez first designed his heroine’s costume. The red, white and blue body-fitting suit pays homage to the country’s flag, including the one bright white star, which sits below the right shoulder.

The main character was always going to be a woman, Miranda-Rodriguez claimed. He said we have been conditioned as a society to assume leading comic book heroes are to be masculine, especially if they are written by men. This was a conscious decision to break the stereotype.

“The original inhabitants referred to the island as Borinquen,” Miranda-Rodriguez said. “When the national anthem was written, it was called ‘La Borinqueña,’ which literally translates to ‘The Puerto Rican Woman,’ and the feminization of the island name. The anthem is not about a woman, but they named it to be that way. I continue to think of Puerto Rico as a woman.”

Culture plays a major role while developing the story. The pages are dense with vibrant illustrations and bilingual dialogue. There aren’t any translations, because the author said they would take away from the story. The drawings and situations of the characters provide effective context clues.

“My good friend Juno Diaz said, ‘We don’t have an issue when Tolkien writes page after page in Elvish, and that’s not even a real language. Or Gene Rodenberry’s use of Klingon; people learn it as if it’s a legitimate language,’” he said with a laugh. “I think people would care to learn a little Spanish so they could communicate with a lot more people.”

Especially for millennials in Puerto Rico, English is a go-to language when conversing with friends. However, they’ll revert to Spanish when addressing elders. Miranda-Rodriguez said to keep in mind that although English may be the norm in the United States, our country still doesn’t have an official language.

Mythology is important, too. Comic books often pull from classic Greek, Roman, Norse and other mythology, but Miranda-Rodriguez tapped into his nationality’s lore.

“The original inhabitants of the island, before the arrival of the Spanish were Taínos,” said Miranda-Rodriguez. “They had their deities and their own belief system. Each of the deities had their own imagery to go along with them. It took an artistic license to kind of expand on their mythology.”

One of those concepts was the mother goddess, Atabex, who shed tears that became crystals. Those crystals form the star that’s affixed to Marisol’s costume. The idea was generated from staring at a topographical map. Five caves stood out to Miranda-Rodriguez, who quickly associated the five points of the star.

Being an environmental student, Marisol Rios De La Luz would be set up plotwise to explore the caves to collect rocks and other items for her research. Her curiosity, education and determination, by happenstance, lead her to an unexpected milestone in her life.

“It’s a story that’s very typical of an American comic book story,” Miranda-Rodriguez said. “Although the main character is of Puerto Rican heritage, many people can relate to her. It focuses on human condition, family and societal values.”

Similar to his character, Miranda-Rodriguez’s unwavering curiosity and determination has led him to a particular chapter in his life. “Part of the reason why I wanted to do this tour is to understand the migration of the Puerto Rican community from the island. 3.5 million live on the island, 5 million live in the United States. The number has increased significantly since the 1950s. There was a massive migration when my family came. Now, with the debt crisis, there has been a consistent migration since, I think, 2006.”

Miranda-Rodriguez is happy to reach a diverse audience with his tour. He saw a primarily white audience at the University of Washington in Seattle, while a black-dominated crowd was in New Orleans. Florida is where he would see a significant Latino turnout; he said that by 2020 Puerto Ricans will outnumber Cubans in Florida for the first time ever.

He chuckled when talking about his career. The 46-year-old admitted he got into the business just three years ago. In the last 24 years, he’s gained professional experience producing and directing media campaigns, plus curating a few art exhibitions for Marvel Comics.

Miranda-Rodriguez reminisced about his first paid job at the Burger King inside the Rosamond Gifford Zoo’s visitor center. He used his money to buy comics from the former Dream Days shop, then located in downtown Syracuse.

“The guy who ran it was incredibly cool, and he wasn’t into the overpricing of collectable books,” Miranda-Rodriguez recalled. “I remember buying a very vintage copy of The Amazing Spider-Man, the first appearance of the Green Goblin, which came out in 1964, for less than $10.”

Before the part-time burger job, affording comic books was difficult. He was the middle child of a handful of kids, all raised solely by their mother, who received public assistance. Miranda-Rodriguez said he’d collect and return bottles to the redemption centers in order to save money to buy comic books.

He always had the knack for drawing, too. His friends would pay him for his illustrations, especially those inspired by popular comics.

“Comic books provided a sense of escapism and familiarity for me,” Miranda-Rodriguez said. “Although my nationality wasn’t represented, I saw the universality of the stories.”

While growing up as a minority, he became accustomed to the lack of Latino characters in sitcoms, although that didn’t stop him from enjoying Happy Days, Friends and How I Met Your Mother. For him, it was all about the stories.

“I grew up to learn the importance of inclusion,” he said. “It’s psychological. You’re learning and enjoying all of this content, but you don’t see yourself reflected.”

Prior to moving to Syracuse, his family lived in Reading, Pa., and, before that, Puerto Rico for about a year. Life was different in the Salt City’s schools. It was a surprise to him that some of his fellow classmates had known each other since kindergarten. New York City High Schools are almost like a college, Miranda-Rodriguez said, so you might not know anyone when you get there.

Like any great origin story, the first thing Miranda-Rodriguez did at Fowler was run for class president in 1986. He drew his posters by hand and charismatically spoke of field trips and doing things together. To his surprise, he won.

His positive and outspoken attitude got him a spot in the cool-kids clique, but he still embraced his alter ego. He was close friends with basketball players and the captain of the cheerleading squad. Yet he also played trumpet in the school band, loved playing miniature golf and dined on french fries and gravy during late nights at Denny’s.

He is also involved with his own hip-hop group endeavors as a part of Darryl Makes Comics. As the name of the company’s acronym (D.M.C.) implies, Darryl McDaniels of the popular hip-hop unit Run D.M.C. is one of the partners of the independent publishing company. Miranda-Rodriquez, who is friends with Atlantic Records executive Rigo Morales, was introduced to McDaniels through the record mogul. Morales is senior editor of Darryl Makes Comics.

The Fowler alum said that the independent company gives him the freedom to control his own comic and storytelling, instead of taking the corporate route and forfeiting artistic flexibility. Plus, there are those bursts of childhood wonderment that bring him back down to earth.

“There are a few moments where I have to remind myself I’m working with a legendary icon,” Miranda-Rodriquez said. “There was one moment where we were listening to Public Enemy and then we both started rapping along to the music together. It’s something you and your buddy would do during a road trip or while sitting around, but this is DMC. It’s like what the hell is going on here? It’s really amazing.”

There weren’t any nuggets of advice in terms of pursuing a passion. Miranda-Rodriguez didn’t create time-sensitive goals and unrealistic expectations to succeed. He simply did it. This is a story he gets to share not only with those seeing the talk about La Borinqueña but with Fowler students especially.

“I was also invited to speak at a breakfast to be held at Fowler High School,” he added. “I heard it’s being restructured, so this is the last graduating class. It’s symbolic.”

Miranda-Rodriguez hopes people take away a little something from his work. They’re more than just pages filled with drawings.

“When people read a comic book, especially people who don’t normally read them, they have a tendency to gloss over them,” he says. “There are so many layers, and it was fun to write it that way. There are a lot of Easter eggs that people may or may not get, but it’s OK if you don’t.”