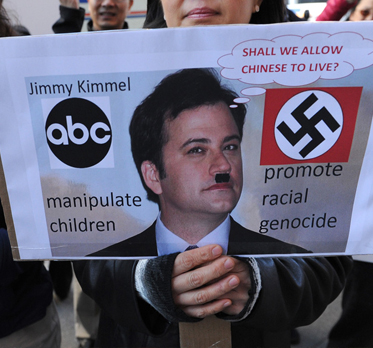 If I rolled the tattoo way, the First Amendment and Second Amendment to the U.S. Constitution might be emblazoned on my amazing biceps.

I don’t tattoo, and I’m not sure about the “amazing” part of my biceps, but I do live and die by, especially, the First Amendment. My career as a journalist is wrapped in it: Our government cannot infringe upon freedom of the press.

So why am I so disturbed about Jimmy Kimmel? I know I’m stepping in it right now to be asking for someone to bring me my high horse. But you know what? Kimmel and ABC overstepped it.

Simplified, the “Kids Table” skit had one child suggesting the U.S. could forego paying its foreign debts by killing everyone in China. Kimmel’s producers and the show’s overseer, ABC, decided to let that one go.

There was and still is outrage. ABC apologized. The outraged reached the White House. The network axed the skit from any further episodes and online. Said ABC, “We would never purposefully broadcast anything to upset the Chinese community, Asian community, anyone of Chinese descent or any community at large. Our objective is to entertain.” And your objective is to get attention. Well done, Kimmel and ABC. Collateral upage.

I don’t buy the apology or lack of oversight. Much as many viewers might believe these late-night shows are live, they aren’t. On “live” days – meaning when the shows are fresh, usually Monday through Thursday – they are shot, live, late afternoon/early evening in L.A. (mostly) or New York (Letterman and “The Late Show,” as two examples). The “live” or “recorded live” part gives the shows the needed edge, but aside from “Saturday Night Live,” they aren’t “live” for those of us watching at 11 or 11:35.

So that gives the networks plenty of time for edits. Even “live” programs, from morning shows to nightly news and sports broadcasts and “SNL,” have a five-second delay (from “live” to real-time broadcast) to edit mishaps, foul language, clothing slips or worse.

No excuse for Kimmel. This was a bit that could have easily been edited for content and sensitivity. I’m no prude, by any stretch. But this one stretched even my boundaries. This is not just a kids-will-be-kids comment. Save “kill ‘em all” for a Metallica song. At least the bystander knows what he or she is in for.

My take is that this bit was deliberately left in to fester – for much-needed publicity purposes for Kimmel’s show and ABC. So, they got that PR and outrage, including right here. Much as they know it will blow over, many viewers will not get over the bad taste.