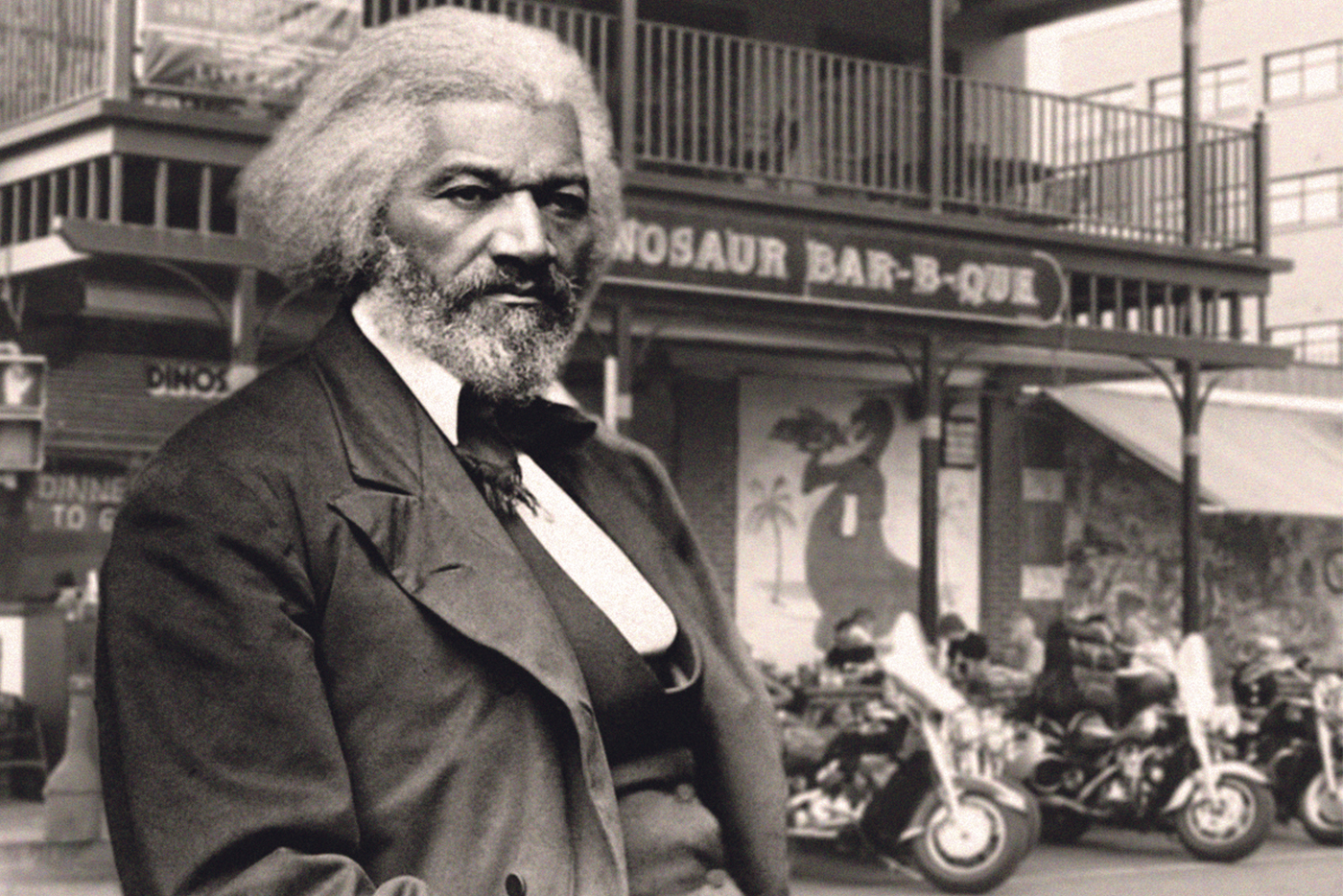 Jeff chats it up with Frederick Douglass about jobs, celebs and meeting the president.

When President Trump let it slip last week that Frederick Douglass is still alive, a lot of my media colleagues laughed at him. They saw it as more evidence that most homing pigeons have a deeper grasp of American history than the president.

“Frederick Douglass is an example of somebody who’s done an amazing job and is getting recognized more and more, I notice,” the president said.

While the rest of the media snickered, I picked up the phone and invited the legendary abolitionist, who still lives in Rochester, to Dinosaur Bar-B-Que here in Syracuse. Ever gracious and not looking a day over 160, he arrived in a late-model Jetta, scarf flapping in the breeze.

Douglass will play two sold-out shows at the Landmark Theatre Feb. 17 and 18. Between bites of pulled pork and swigs of Syracuse Pale Ale we plowed through a variety of topics.

Jeff: You’ll probably want to continue heading east to Albany. They have a lot of those kinds of goodies there. But you’ll need a connection.

Frederick: So let me get this straight: This guy makes $84,000 a year working for Syracuse for 10 hours a week, and he doesn’t even have to live in Syracuse?

Frederick: That’s freedom on a scale even I never imagined. Albany must be the Promised Land!

Jeff: I wouldn’t go that far, but they take care of their friends.

Frederick: Speaking of which, what’s going on with that new Film Hub?

Frederick: The $15 million Central New York Film Hub! That big empty building in the middle of nowhere that looks like a biological weapons testing factory.

Jeff: I have no idea what you are talking about.

Frederick: It exists! For real! I dropped by there this morning, thinking someone might want to make a movie about me. Thought maybe I’d flag down Morgan Freeman and pitch my biopic.

Frederick: I didn’t see a single actor, director, celebrity, nobody. Not even Arsenio.

Jeff: The Heavy Hitters. Lawyers. Their offices are close.

Frederick: Are they the ones who fought to overturn the Fugitive Slave Law?

Jeff: Not exactly. They’re personal injury lawyers. They do a lot of TV commercials. Around here, that counts as being a celebrity.

Frederick: Do you think they’d do my movie?

Jeff: Maybe if you wear a neck brace. Have you been injured? Any neck pain? Lower back twinges, stuff like that?

Frederick: I’m sure I can come up with something. How’d you get to be so tight with these Heavy Hitter guys?

Jeff: I’m really not. I just stopped in and killed some time with them the other day after Harrison Ford told me he hated my script. We were all a little sulky. Peter seemed a little down on the Film Hub project, too.

Jeff: He said, “I can’t even think of any accidents that occurred during construction.” I felt bad for the guy.

Frederick: What else is going on in this town?

Jeff: A Century of Collecting: Ceramics at the Everson from 1916 to the Present just opened.

Frederick: You people know how to live.

Jeff: So let’s talk about you. You’re got a remastered boxed set of your most famous speeches coming out in August, you’ve got a hot new restaurant in Midtown, Freddy D’s. Did I read somewhere that you’re a snowboarder?

Frederick: I do yoga. I keep a positive attitude. I watch my carbs. Mind if I have that last piece of catfish?

Jeff: Knock yourself out. Can you offer a sneak preview of what you’ll be talking about at the Landmark?

Frederick: I’ll touch on my meetings with Abraham Lincoln at the White House. Those were fascinating.

Jeff: Based on those experiences, would you want to meet the current president? See all that crazy up close and personal?

Frederick: Well, there’s an old saying, by me, I believe: “Power concedes nothing without a demand. It never did and it never will.”

Frederick: Yes, but I’m not holding my breath for an invite.