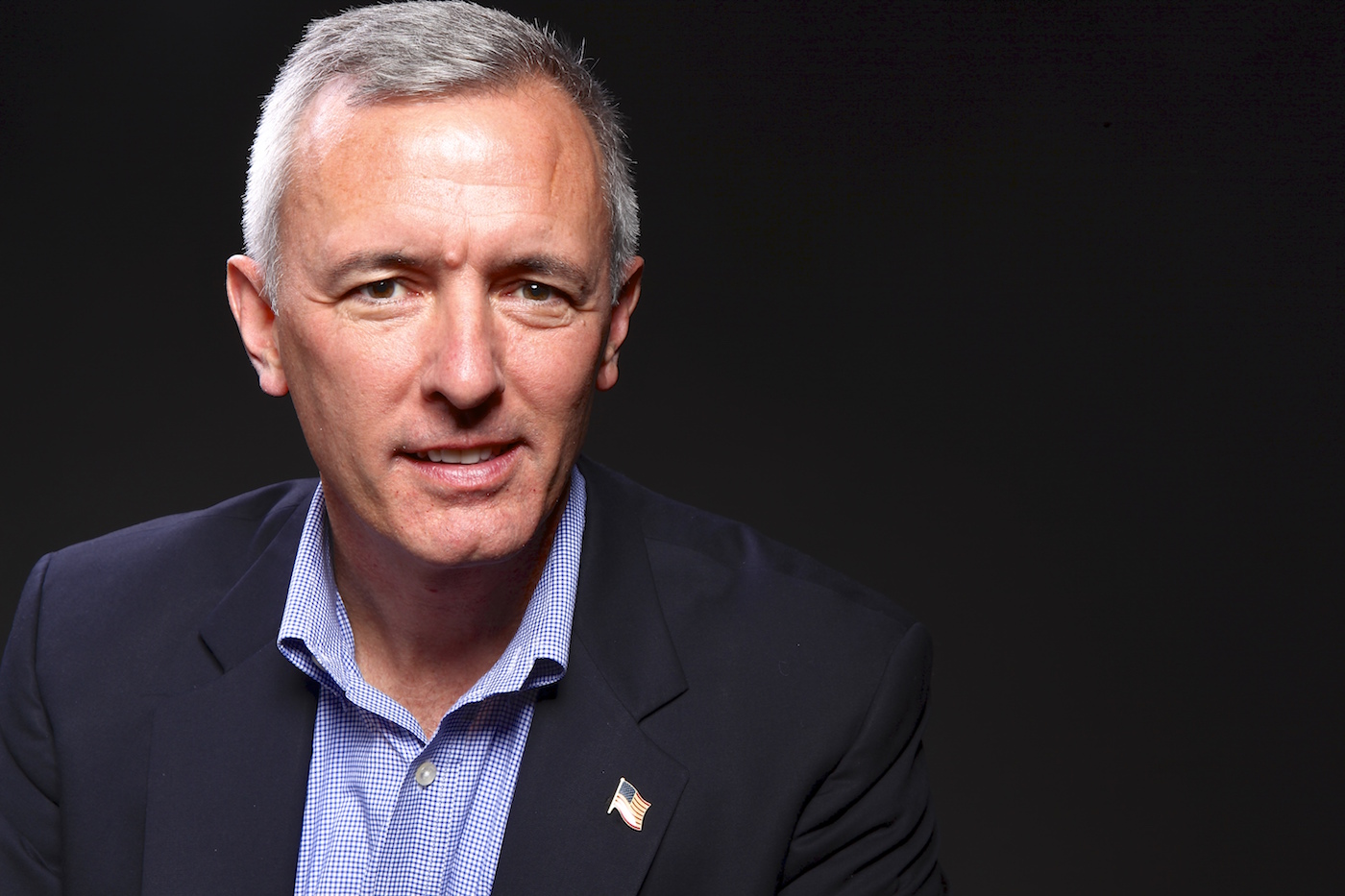 John Katko is not consulting CNN or the weekly news magazines for their latest polls indicating how the presidential candidates are doing. “None of the above,” he responds firmly when asked his choice. Onondaga County Republican Party chair Tom Dadey has worked long and hard for Donald Trump, and some big dogs from the GOP are openly touting their ballot crossover to Hillary Clinton. But Katko expresses serious concerns about the tone of Trump’s rhetoric and the integrity issues that continue to plague Clinton.

Yet some veteran political observers project that after Election Day, the current Republican congressperson representing the 24th District will be among several possible logjam breakers for an almost motionless House of Representatives. Actually, Katko has already filed a fistful of motions, bills proposed to be laws, more than any other D.C. rookie, and each has carried the name of a Democrat as co-sponsor. It’s his brand: independent, bipartisan, action guided by self-defined right thinking, not the current hype.

At 54, Katko has no visions of being there for 20 years like Jim Walsh was. But he has ambitions. He wants to make a difference. He wants to help the small business owner, the inner-city dropout considering a life of crime, the alien but otherwise law-abiding immigrant.

John Katko is opposed in his Nov. 8 bid for re-election by Democrat Colleen Deacon, who was interviewed in last week’s Syracuse New Times.

Is the stalemate in Congress a permanent way of life, or can there be a breakthrough in decision-making? What would it take?

The gridlock in Congress troubles me. That’s why I ran for Congress. I was sick and tired like everyone else. I would respectfully submit that I have shown how to break it. I have 15 bills that have passed the House. That’s more than any freshman this term, more than any freshman in 30 years. Every single one of my bills has a Democrat as a co-sponsor. By endeavoring to work with the other side up front, you can really get things moving. I’m considered one of the most independent members of Congress.

ISIS, Russia and China. ISIS is probably the biggest threat we’ve had to our national security since at least 9/11. We have to deal with it in a very detailed way. As soon as I got to Congress I was appointed head of a task force to determine the threat of ISIS in the United States, in much of Europe and in the Middle East. I actually traveled to the Middle East to do that. I had both Republicans and Democrats working with me. We issued a 72-page report. It has 32 findings and 50 recommendations. Out of those 50 recommendations on how to combat ISIS, 25 have become law, or on the verge of becoming law.

Russia is in the Middle East for the first time in 40 years. They’re in Syria to prop up the Assad regime, which has been engaged in mass killings. We need to get Russia out of Syria.

As far as China goes, we need to address the fact that China shows some belligerency in the South China Sea. They’re doing that, I think, because their economy is slowing down. That could be the cause of real problems with our democratic neighbors, such as Taiwan.

What kind of economic development can really touch our degree of local poverty?

First of all, the amount of poverty we have in this country is disgraceful for such a wealthy nation. And the amount of poverty we have in this city is horrible. I saw firsthand for 16 years as a gang prosecutor there’s a short term and a long term. A macro and a micro. The macro is we need to do the things I’ve been supporting, like school lunch programs, making sure these kids get fed, because a lot of these kids get all their meals from school. We need to continue to address the literacy issue, mentoring to keep these kids in school to keep them from dropping out into a life of crime, which we’ve got to try to stop. Establish more enhanced mental programs; rolling back the Common Core mandate so that teachers have flexibility to teach the kids a little differently; Head Start; and all the programs I’ve supported, pre-K.

Then there’s the big picture. Why do you have the system of poverty? I will submit that it’s directly tied to the way we’ve lost manufacturing. We’ve got to stop doing the crappy trade deals that are hurting us. NAFTA (North American Free Trade Agreement) killed us here; 30,000 jobs have left here since NAFTA happened. The best way out of poverty is manufacturing jobs.

Can we stop the jobs moving out of the country? How?

Yes. There’s a new plant manager at Bristol-Myers. She’s from Ireland. I did a tour of Bristol-Myers. She told me that Ireland’s tax rate for manufacturers is 12 percent. Ours is more than triple that. That’s a fact. The point is we do not have a level playing field internationally. We have far more taxes, far more onerous regulations on manufacturers that’s prompted them over the past 20 to 30 years to go overseas, especially with these bad trade deals. That’s trillions — that’s with a “t” — of dollars overseas that used to be here.

We can get that back if we do sensible tax reform that doesn’t line the pockets of the fat cats. If they come back, you’re going to have hundreds of billions, if not more, of new revenue introduced to the economy. And, of course, manufacturing will help people get off the welfare rolls. How is the media handling politics in your campaign?

I don’t have any complaints about the media because when I got into office I made it my priority to make myself available as much as possible to the media, and I think I’ve done a fairly decent job of that. Throughout my time in Congress I think they’ve been pretty fair.Which presidential candidate do you support,

None of the above. I know there are a lot of commercials out there trying to make you believe otherwise, but I have never endorsed Donald Trump, and I’ve never said I’m going to vote for him, and I’m not going to. I have serious concerns with his tone of rhetoric. And I’ve had very serious concerns about some of the integrity issues with Hillary Clinton. So I’m not going to vote for either one, and I don’t think I’m alone.

How can we begin a resolution to the conflicts between police and communities of color?

I’ve been doing it for 20 years. As a federal organized crime prosecutor, I was exposed to it in El Paso with a drug cartel and the need to rely a lot on local law enforcement and their actions with the minority community there. Same thing in Puerto Rico for two years, and the last 16 years back home here. I helped form a gang violence task force. I have a bird’s-eye view of the issues that plague inner-city youth, and the African-American community in particular, but also what cops go through.

Let’s start with the youth first. They need to have better opportunities. They need to have something to do other than be on the street. But even for those individuals who are doing everything right, sometimes the cops screw up. And when they screw up, they should absolutely, positively hammer the cop who screwed up. I’ve prosecuted police officers in Schenectady. On the other hand, 99.9 percent of the police officers that I have encountered do an unbelievable job under difficult conditions. Body cameras would help a lot.

What is a realistic strategy for immigration and those living here illegally?

Anyone who talks about immigration will tell you the very first thing you have to do is secure your borders once and for all. When I got to Congress I worked on a border security bill, the first comprehensive bill in a long time. I was instrumental in making sure that they paid attention to the northern border, which they were not doing. I also introduced a spinoff bill that passed the House, looking for a northern border threat assessment. Once you have border security, you build on immigration reform. The border security bill is still sitting there. Hopefully it’s going to get moving.

But immigration is a tough one. You’ve got to look at it in sections, You’ve got a temporary work visa program for farmers’ seasonal labor help, and you need these people coming in and out of the country more streamlined and less bureaucratic and costly. There’s a student visa issue. I’m sick and tired of seeing students come over here, educated in the best institutions in the world and then go back home to compete against us. We’ve got to get tough; if you engage in criminal behavior I don’t think there’s a path for you to stay here.

And the ones who are here illegally, but otherwise engaged in law-abiding lives, you’ve got to get them to come out of the shadows. I don’t think you can put them all in a boat and ship them out of here. That’s unrealistic. Give them a legal status, let them pay their taxes and have them go to the back of the line to apply for citizenship.

What is most unique about you in pursuit of public service?

I would say that my time as a public prosecutor, and the moving we’ve had to do, has made me stronger, has made my wife stronger, and we’re able to deal with a lot of the nonsense that happens in politics, because we want to do the right thing. It’s made me more goal-oriented. I’m not going to be deterred. I have the strength to be independent of my party at times, be bipartisan, not worry about what other people are thinking, but doing what I think is right.

What can we do to encourage small-business growth?

First of all, you have to acknowledge the fact that small business is comprised of 90 percent to 95 percent, perhaps even more, of the economy of New York state. New York is a small-business state. People might think it’s the big corporations, but it’s not. Quite frankly, the federal government is regulating small businesses to death. What we’ve done is a series of bills designed to streamline the number of regulations, to pare them down, eliminate the unnecessary ones, and make federal regulators accountable to Congress. We also need tax reform.

Jim Walsh occupied the 24th Congressional District chair for 20 years. Are you thinking about staying that long?

I’m 54 years old. If I was there at 74 my wife would kill me. But seriously, I want to be there long enough to have a lasting impact. They’re saying we’re developing as a new generation of leadership, more independent, more bipartisan. That’s important because the next Congress is going to have a much smaller Republican majority than now. I want to stay long enough to advance the dialogue that you can get through the gridlock by doing the types of things that I’ve done.

How will you be more proactive in Congress?

I understand why I’m there. I’ll be ready to take on one thing, and I’ll be looking at the next. I’m used to constantly juggling major projects. There’s a lot of things, looking forward from a legislative standpoint, that I’m just hungry by nature. I can’t help it.