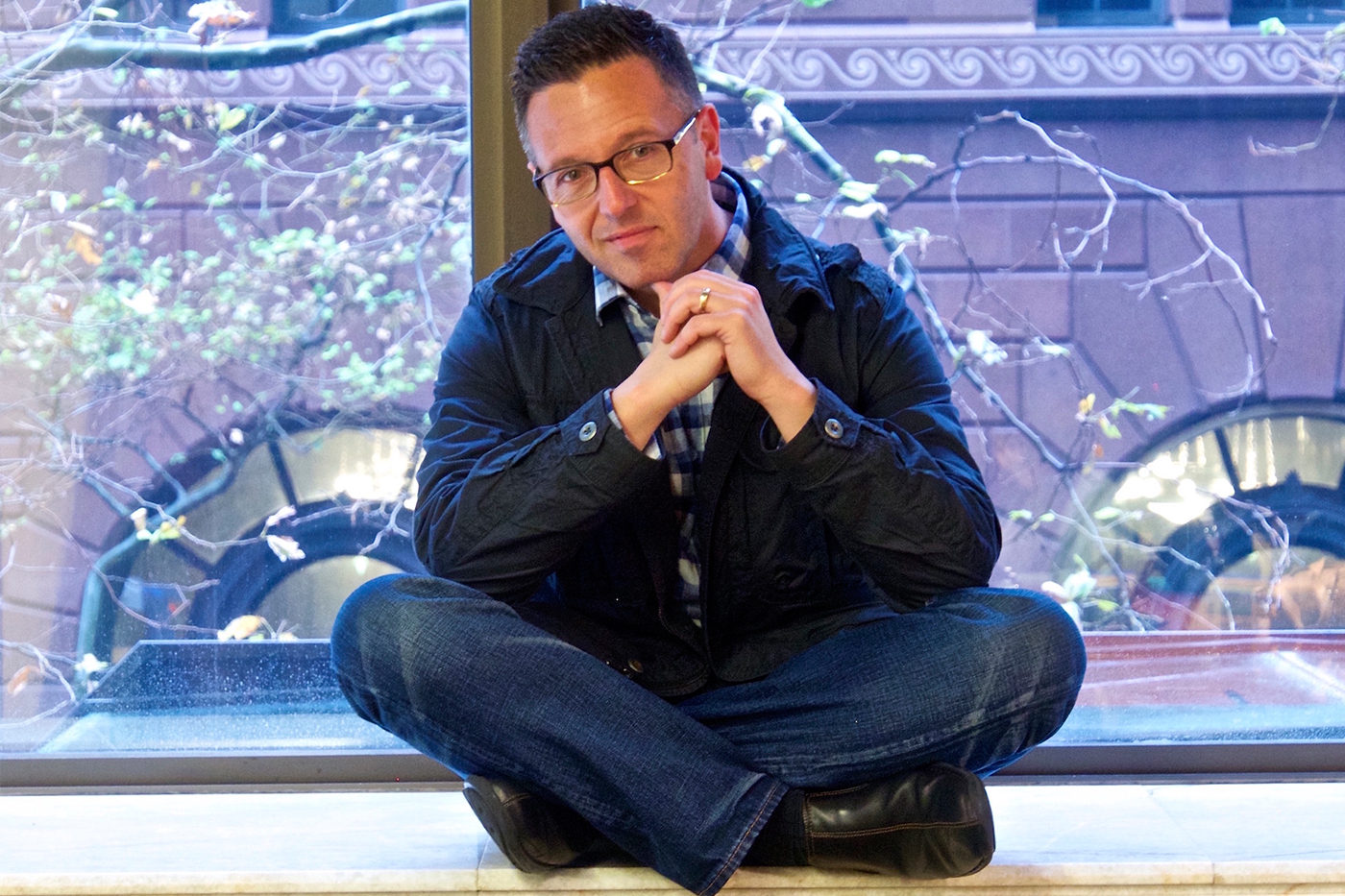 Since leaving TV, John Edward has switched his focus to touring.

Renowned psychic medium John Edward returns to Syracuse after a four-year gap. He’ll be taking the stage on Thursday, May 18, 7 p.m., at the Mulroy Civic Center’s Crouse-Hinds Concert Theater, 411 Montgomery St. Tickets are $59, available through the box office, by phone (315) 435-2121 or through ticketmaster.com.

After decades of showcasing his talents to believers and skeptics, notably as host of the 2001-2004 TV series Crossing Over on the Sci-Fi channel (no called Syfy), he continues to pursue his passion, especially when it comes to keeping his audiences informed.

The husband and father of two spoke via telephone from his downstate home. His daughter, Olivia, is currently starring in FX network’s Better Things, which is filmed in California.

Although Edward does not see television as an outlet for his own work, he fully supports his children and what they want to. “They’re being raised with the philosophy of understanding energy and respecting it,” he said, “how to protect themselves and how to look at life through an energetic lens.”

Looking forward to coming back to Syracuse?

It feels good. It’s been a while. I probably won’t have time to explore, but something took place at one of the venues there I’ll never forget. I always wait to see if it will come true again.

When I did a reading, someone got a bottle of champagne because a balloon had landed on their property or something. There is that helium balloon event (Balloonfest) that happens up there. It’s kind of big for me to remember something like that, because I’ve traveled quite a bit.

I’ve been on the road since 1999. I don’t really think of it as a tour. When Crossing Over was at the height of its fame, I figured I’d visit three or four cities and have people come to me.

It came to a point where tickets weren’t really selling. I told my wife that maybe I wasn’t supposed to be touring anymore. She said, “I’m not the psychic one, but maybe you’re supposed to be going to the places where people need you instead of expecting people to come where you are.” The energy from how she said that hit me strongly. I was like, “shit,” that should have been my answer.

I’ve told myself that as long as I have my health, I’m going to travel. It’s grueling, but it’s worth it.

Although you’re no longer on television, you reach people through internet initiatives. Has this been more effective?

I think it will be one day. It’s not there quite yet. After leaving television 10 years ago, I wanted to pioneer this digitally. My idea was to have people subscribe to the community. I could respond to them instead of a television network. I’m glad I left. Since then, programming has gone reality- and conflict-based, is overproduced and over the top. It’s not healing.

There were things years ago that I wanted to discuss and do, but television was not going to let that happen. I wanted to teach more, allow access of information that could be useful to people. This is more than entertainment.

There’s no way of blocking negativity from the media. How do you deal with that?

Respect the fact it exists. I’ve been doing this for 32 years. There isn’t a lot I’m going to hear that I haven’t heard before. The first couple years, what people would say was paralyzing. The more you become known, the more it ratchets up. A person has to develop a thicker skin. I’ve got a bull’s-eye on my ass, and I accept it.

People say to me, “you don’t know what it’s like to be attacked.” Google my name, and I appear as the biggest douche in the universe. It’s perspective. I understand where people are coming from, and I don’t judge them.

Look at the last round of politics; it’s been like that for almost my entire life. People ask, what do you know about politics? Nothing, but it’s about your side vs. my side. I don’t stand outside skeptics conventions, handing out pamphlets and giving free readings.

I don’t try to convince people but simply share what I do. To see the light go on in someone’s eyes when they’re pretty dark outweighs everything else.

You’ve been parodied on numerous shows.

When South Park became really popular, a friend asked me to come over to check it out. We watched the episode with Mr. Hankey, the Christmas Poop. It really wasn’t my kind of humor. It was kind of crude and a little mean. When they made fun of me the intention was to make a statement, which was mean-spirited.

If you’re going to make fun of me, don’t be mean and make it funny. Family Guy also made fun of me, but it was funny. You have to go with the flow.

I’m not on television, and the younger audiences have no clue who I am. Yet they do because of South Park. It’s kind of backfired on them, because more people have reached out to me for help.

Teaching people is something you said you enjoy doing. Is there a particular topic or theme with each show?

It’s energy-specific, because each group and each person is different. A goal of mine is to get people to look at life differently and more energetically, to help them understand they can evolve, to show what tools are available to them when trying to get through the circumstances they’re currently in.

What did you want to be when growing up?

I wanted to work in the business side of healthcare. I was a few credits shy of my master’s degree in healthcare and public administration. I worked at a deli, then to a video store. From there I moved on to become a phlebotomist before moving into the business side of the hospital. At that point, my worlds kind of collided.

I was due for a promotion at the hospital. I made a joke to my wife about a month before that if I didn’t get the title change and the bonus, it would be a sign to quit this path. It was kind of an empty promise when I made it, because I had guarantee from my boss of an 18 percent increase and an extra week of vacation aside from the title thing.

My manager and the vice president were telling me how great and wonderful I was, that I had a great career ahead of me and being a major player in the administration. However, it was only a 2 percent or 3 percent increase. That was the last thing I heard, because I was thinking of leaving. I made Halloween my last official day. It felt appropriate. (Laughs.)

Does your ability run in the family?

No, but my mom’s side of the family would always have psychics come to the house. I had a reading done, but I wanted to debunk the woman (Lydia Clar) doing readings at my grandmother’s house. Instead, she was very accurate. I’ve been a psychic since I was 15 years old. The experience ended up changing my life.

How did you hone into your ability after the experience? Did you keep it to yourself?

I kept it to myself. After Lydia read me, the first half I would not call accurate. The second half was fuckin’ spot-on accurate, which scared the crap out of me. She would have to have been with me in order to know these aspects to my life. Plus, she would have had to know my friends and people I was hanging out with, because only they knew the circumstances and situations.

She was very specific with letting me know the result of a relationship. For me, I remember having a sigh of relief. Clar talked about this one girl I was interested in, but knew she was dating someone. She said that the girl wouldn’t end up with either of us, but instead with someone who worked with food. I didn’t know she worked at a country club as a waitress, and she dated the chef years later.

It felt like the rug was pulled out from beneath me. I felt violated. People thought it was cool, but not when you’re into the subject matter.

I went to the library to look for what objective, professional people had to say, not what my family or people who were into the psychic community. When reading about it, all I could think about was that this isn’t psychic, but normal. I had to reframe my perspective on how I live my life differently than before.

Is there anything about your abilities as a psychic that still perplexes you?

Perplexes, no. I just want to get better at it. I still feel like a student 30 years later, still learning.

How do you measure personal growth?

I guess by looking in the mirror, looking at whatever comes through.

Someone recently asked me why Crossing Over isn’t shown as reruns, if I would love it if it was back on. My answer was, “Not really.” It was 16 years ago. The me of now blows the me of then out of the water. My philosophy has changed quite a bit. I have more experience of being a father of a 14- and a 10-year-old. As a result of that, my perspectives have shifted. I feel that I am stronger and more accurate, plus there is the teaching element instead of just giving information.

Did religion come into play?

I was forced to be religious by my grandmother. She dragged me to Catholic church every day until first grade. I’m not religious now but highly spiritual and my faith is unwavering. The whole organized religion thing, you know, is a business.

I tell people all the time: Faith is free. Religion, you have to pay for it.

What are your thoughts on reincarnation?

I believe in the concept of reincarnation. This life is a classroom upon which we matriculate through and we come back to work on whatever lessons we need. It’s like the university of life.

Are you big into meditation?

I’m more into prayer than meditation, and I do this before and after each show. I don’t eat before a show, but I’ll have chocolate and caffeine. I think the amount of food I eat affects me. I like being clear.

What nonprofits are you currently working with?

I don’t work with one specific organization. Last year I did a charity event for a children’s hospital in New York City. We raised over $100,000 at the end of the year. I make sure I give back. What you put out there does come back to you.