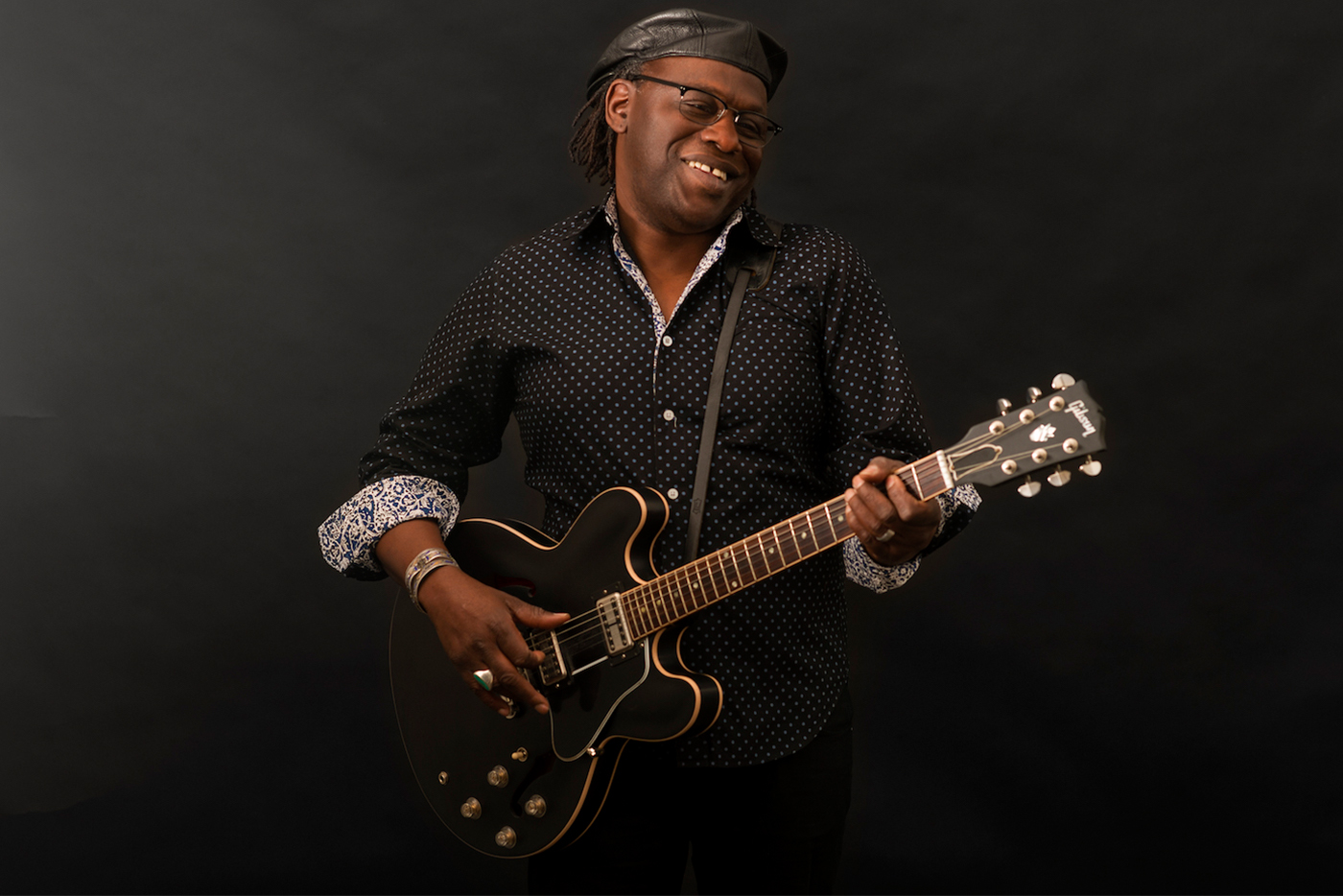 Bluesman Joe Louis Walker waltzed into Syracuse Jan. 5 for a show at the downtown Funk ‘N Waffles. The 2013 Blues Hall of Fame inductee, who turned 67 on Christmas Day, continues his 40-plus-year music career, which includes a 2017 Grammy Award nomination in the Best Contemporary Blues Album category for his disc Everybody Wants a Piece.

He was joined by fellow nominees Lenny Bradford on bass and local native Byron Cage on percussion. Local keyboardist Will Gorman took over the ivories, because Phillip Young, who plays on the album, is currently traveling and promoting his clothing company. Walker set the tone with his opener “I’m Not Messin’ Around,” the traditional “Wade in the Water” and an impeccable rendition of “While My Guitar Gently Weeps.” Before the gig, Walker chatted about his musical influences, his upcoming album and the evils of American Idol.

Can you give a brief description of your Grammy-nominated album?

Everybody Wants a Piece (2015) is sort of the third of a triumvirate of records. The first was Hellfire (2012) and the second was Hornet’s Nest (2014). We recorded a lot of songs we flushed out from soundchecks of shows we’ve played from around the world. We wrote quite a bit of material. It’s all of us singing and playing. There aren’t any hired guns so to speak. And we had a lot of fun doing it. I figure since we had so much fun doing it, people might like it.

Hornet’s Nest begins with an explosive title track. Do you aim to kick your albums off with a resonating song to set the tone?

I try not to begin an album or a show like a house on fire, but it sometimes turns out that way. It should be an ebb and flow, like a conversation. When you’re having a conversation, you’re not trying to make a point first. It’s something you lead up to.

After all these years, how difficult is songwriting?

It’s like anything else creative. Ideas gestate in your mind. Some songs I wrote when I was 16 were placed on albums when I was 46. I didn’t know how to complete the songs until I got older. You can frustrate yourself by doing something over and over again.

I had a great producer named Steve Cropper. He was in Booker T. & the M.G.’s and the Blues Brothers. This is something I’ll never forget. I was recording a track. After the fourth take he told me, “Come back the next day, because after the second take you’re not doing any better, just doing it more.” I’m of that frame of mind.

All of the records we grew up liking featured all the members of the band in the same room together. They did it warts and all.

Overdubbing can get to be too much. And now I can have my cat be a YouTube star by playing the piano and meowing in key. I can take the pitch bender and Auto-Tune and have it sing with a chorus of other cats.

Do you have anything new brewing?

Yeah, we hope to release a new album in the fall. There are about seven or eight tracks done, and we’ll record five or six more. It’s about making a cohesive record and not having it sound like the last three.

Your biography says you picked up the guitar at 14.

Actually, I picked up the guitar at about 10. I didn’t own one until about 14. It was a real cheap Sears, Roebuck & Co. Silvertone.

I play several other instruments: the violin, accordion, harmonica. I still can play the harmonica pretty good; the violin, however, I’d have to really practice. I also play bass and keyboards.

I stuck with the guitar, because it’s the most accessible instrument, I think, for the kind of music I play. To be quite honest, the guitar is the instrument that kind of conquered the world. If you lined up everybody who played a guitar and influenced the music business, it would outweigh every other instrument, I’d say, 30-to-1.

Were your parents musically inclined?

They loved their record player. When they moved to the West Coast, they brought their music from the South. I got my taste in music from them, and my older brothers and sisters — I was the youngest child of five — so I got everybody’s music. I was a sponge. I grew up loving a variety of music and still do.

I moved to the Fillmore district of San Francisco, and my cousins had a band. It was tailor made for me. After a year of schlepping equipment, my mom encouraged me to go to a teacher. I went to a guitar teacher, and she bought me a guitar.

I had to sacrifice sports. All my friends would be going to play basketball or football, and I’d be going to guitar class. None of those guys are playing sports anymore, but I’m still playing guitar. (Laughs) I think I made the right decision.

What did your parents do for a living?

My mother was a nurse before she retired and passed on. My father worked construction. He helped build big buildings, including St. Patrick’s Cathedral in San Francisco.

How has your style of blues music changed through the years?

The music business itself has changed. It’s gone from really unique individuals to “Facebook musicians.”

I used to go to the Fillmore Auditorium every week. When I went to junior high school, I’d have to pass it. Fillmore was like black Harlem. I remember when the hippies came. (Fillmore promoter) Bill Graham presented a great mixture. You’d have the Grateful Dead, Muddy Waters and a jazz quintet in the same show. With those bands you got a bit of an education.

What I have done with blues: It’s not your grandfather’s blues. I’ve been doing it for a long time, mixing it up. When I was coming up, you had to learn 12-bar and play John Lee Hooker, Freddie King and people like them. Even they opened up their music later on.

There are a lot of young people I know who are famous: Shemekia Copeland, Derek Trucks and Susan Tedeschi. I’m glad that they can stretch out.

Musicians have to come up through the ranks. There are no shortcuts with experience. You’d see The Yardbirds or others, there would be two different guitar players. Jeff Beck would always be there. There was another guy you didn’t know who that guy was. Who is this guy? He played his ass off. Two years later, everyone knew Jimmy Page.

Do you think reality shows are misconstruing what it means to be a true musician?

A lot of young people want to be famous. They want to be on American Idol and get their YouTube or Facebook numbers up. They get can take shortcuts with technology. They sing other people’s songs to see how good they are. It’s a blessing and a curse, because it takes away from individuality. Conformity is rewarded.

The thing is, everything sets in after they win. They ride around in a van and sleep three or four to a room. They have to play three hours each night. The monitors don’t work on top of a whole mess of problems. You have to learn to deal.

Can you imagine seeing someone like Bob Dylan on American Idol? What does “once upon a time you dressed so fine/ threw the bums a dime in your prime” mean? Jimi, what does “excuse me while I kiss the sky” mean? Nitpicking. They would have shut those guys down before they got started.

When you first started, how did traveling to other cities and enjoying their musical niches help define your music?

It didn’t help define my sound, but it presented a more colorful palette. I love going and living in different countries, because the music is never where you’d expect to find it. You want to find the best African music? Go to France. (Laughs) You want to hear the best reggae music? Go to England. I try to keep my ears and mind open.

How have your jazz collaborations extended beyond the studios and stages?

I’m in the Thelonious Monk Institute. Every April 30, I travel with 40 to 50 musicians all over the world to celebrate International Day of Jazz. The head of the institute is T.S. Monk, Thelonious’ son. The spokesmen are Wayne Shorter and Herbie Hancock. Other members include Edge and Bono, Taj Mahal, Keb’ Mo’ and B.B. King was also a part of it.

They approached me, because I hold a lot of workshops all over the world: Mississippi, Turkey, Japan. I’m a United States Fellow, and I’m big into education. It’s sanctioned by the United Nations and United Nations Educational, Scientific and Cultural Organization (UNESCO) to help foster understanding for different cultures and races through music.

You are also slated to perform again at this year’s Island of Mustique Blues Festival.

Yeah, I was called about 10 years ago by Basil Charles. It’s two weeks, and we get no money from it. The money we collect through attendees and donations goes directly to benefit the other surrounding islands and their people.

I’m also part of Blues for Peace in New York and the Seva Foundation for the Blind, which was co-founded by my friend Wavy Gravy. I’ve been involved with Bread and Roses in my hometown, which was started by Mimi Fariña, Joan Baez’s sister; Berklee School of Music; American Folk Center; and Rock Against Racism in England.

What was your stint with the Spiritual Corinthians?

I played with the Corinthians from 1975 to 1985. It was probably one of the more enjoyable times in my life. Gospel groups are different. They keep you grounded, singing spiritually. It was a great camaraderie. It wasn’t big money, but it was for the sheer love of it.

I got back into blues music in 1985, but used them and other gospel groups, the Gospel Hummingbirds and The Jordanaires, on my albums.

A few sources of media refer to you as a “living legend.” Has that ever felt intimidating?

I think I’ve made my little imprint. I don’t think people would confuse me with Albert King or B.B. King. In that case, it’d feel like wearing someone else’s shoes. I don’t want to do that, never did and never will.

Where do you see the blues going from here?

There are so many young people around the globe playing the blues. The blues is respected all over the world. The only place where people don’t really know about it is America (laughs), but it’s always been like that. That’s why it took people like the Rolling Stones to bring the blues back here. But it’s always been here.