Joanie Mahoney enjoys her first victory during the 2007 county executive election: “There was a real colorblindness to my parents that I didn’t appreciate as a kid.” (Michael Davis/Syracuse New Times)
Share
Tweet
Share
Share
Email
Comments

Joanie Mahoney can remember visiting places like the B&B Lounge on South Avenue as a child accompanying her father Bernie as he campaigned successfully for the Syracuse Common Council and the New York State Assembly.

With such an upbringing, there was little surprise that she ran for office herself, serving two years on the Common Council before unsuccessfully challenging incumbent Mayor Matt Driscoll in a relatively close 2005 race. It was even closer in a 2007 Republican primary for Onondaga County executive, which she won by 21 votes. 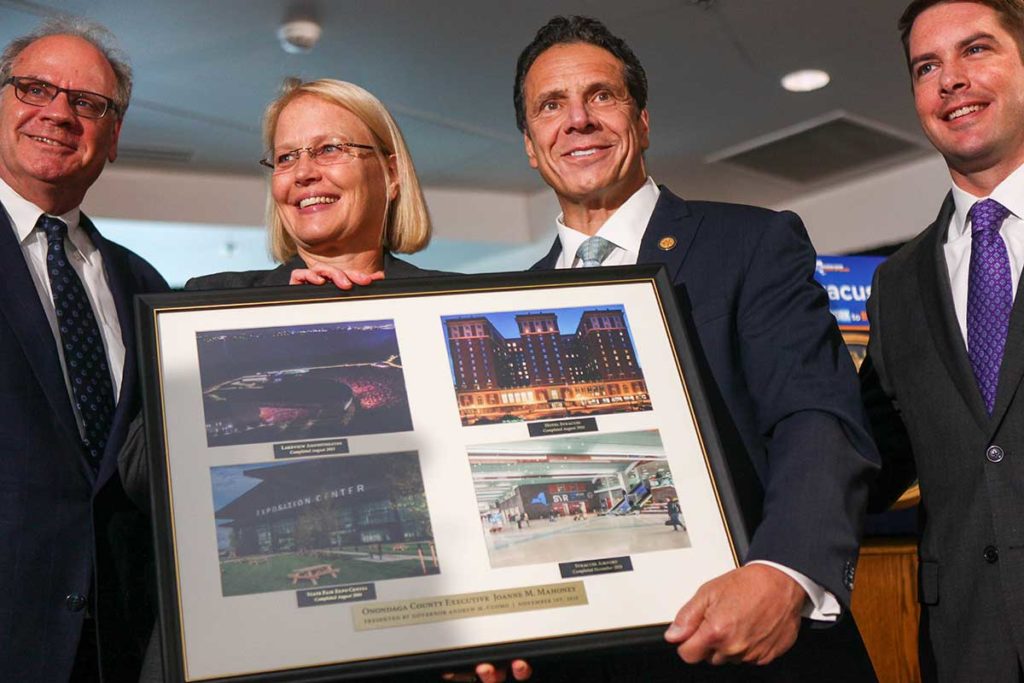 Re-elected twice as county executive, it seemed logical that she would reprise the experience of the first two county execs, John Mulroy and Nick Pirro, both of whom served over 20 years in the county’s top spot. There was great surprise when Mahoney recently announced she was instead leaving office midway through her third term to become the chief operating officer of the SUNY College of Environmental Science and Forestry.

Your career move took apparently almost everyone by surprise. How did it come about?

The conversation started in my role as county executive because we had had a few months of news and it was kind of troubling, and I said, “If somebody ever came to me as county executive and said, ‘We want to build this world-class college of environmental science in your county,’ we would have done backhand springs to make it happen.”

But here we have one, and we’re reading a little at a time that it’s troubled, and I thought, “Should we be doing something, should we be talking about this?” And along that same period of time things started to come from SUNY Upstate, and here SUNY is the biggest employer in Onondaga County. Lots of families here are supported by these institutions, and it’s important to us.

So I started the conversation as county executive. And over the course of a few months I met with the SUNY chancellor (Kristina M. Johnson). It resulted in an offer to pitch in myself. I was excited to help.

How could you help?

The conversation turned to my strength in operations. That’s what I’ve been doing as county executive, and they didn’t have a chief operating officer there, so it’s kind of a hybrid job. I’m really going to be working for SUNY, assigned initially at ESF and as an adviser at Upstate, and kind of take it from here. But I was ready for a new opportunity, and this came along at the right time.

In 2015, leading up to the election, I had some real conversations with my husband, my kids, my parents, my friends, and campaign workers and ultimately decided to go for it again. But I am a believer that there is value in a fresh perspective. I was pretty sure that would be enough, and I think the community deserves a fresh set of eyes.

How bad will it be dealing with the personnel and policy issues at your new institutions?

First of all, the people that I have met up there have been so smart and so kind from the minute I walked in the door at ESF. I’ve been to meetings at Upstate, and I am really impressed by the work that’s done and the caliber of people. I think all of it is solvable. I see an opportunity I’m going to try to maximize, but I’m there as a support person. That’s a different kind of role for me and I’m excited about it.

You’ve also expressed excitement about what you feel you’ve been able to achieve with the issue of diversity.

What we were able to do was what I said I would do when I ran for the job, which was create a workforce that reflects the community. That was a big buzz phrase in those days: “Create a workforce that reflects the community.” We really did it and we took it one step further, actually two steps further, because we also contract out a lot of our business, and it was going to the same people, and the rules were written in such a way that made it go to the same people.

I remember reading an RFP (request for proposal) that said the winning response would be someone who had done this same project before. That’s how you make sure you don’t get any new people. So we changed the language on the RFPs. Then we had an RFP committee rather than just one or two people deciding. We put in language that said people would be scored in part on the basis of the diversity of the team they were putting together.

I remember hearing excuses like, “I’ve looked around and there’s not a person of color who paints.” When we were building the amphitheater and were very deeply involved with the Hotel Syracuse, one of the things we did was funding, with SUNY EOC (Educational Opportunity Center), a program called Built to Build, that went out and recruited people and do things they needed to do to get ready for work.

I invited all the labor unions to come and do a little meet-and-greet with these folks and we actually kept a spreadsheet of the names and contact numbers and made sure everybody was working. It was a little example, but with the work we ended up with a lot of these folks working on the Hotel Syracuse renovation and working at the amphitheater. And there is plenty more opportunity for that kind of thing to happen.

I remember the state Department of Labor does surprise visits at sites, and they dropped in at the amphitheater and there were so many people of color and women doing the electricity they thought we had been tipped off that they were coming. But that’s one of the biggest things about this that we can do is make sure everybody has access to a job. One of the main things about broken families is unemployment.

What influenced the development of your sensitivity to the issue of diversity?

My parents. There was a real colorblindness to them that I didn’t appreciate as a kid. I just thought that’s how everybody was. My parents had African American friends in the house on occasion. I went to Corcoran High School and Shea Junior High and learned about race from the complete mix so that a lot of our friends were people of color. It was a great way to grow up, and I don’t think I ever appreciated it until I got into a role like this.

My parents live on Onondaga Park. We participated in all the park’s programming as kids. We were in the pool all day long. They had recreation leaders that organized games and stuff and we were lucky people that grew up in a place and in a time that we were a little bit after the 1960s and the real hot debates around race. But we came in this moment after that and we all grew up together and there really wasn’t a difference. 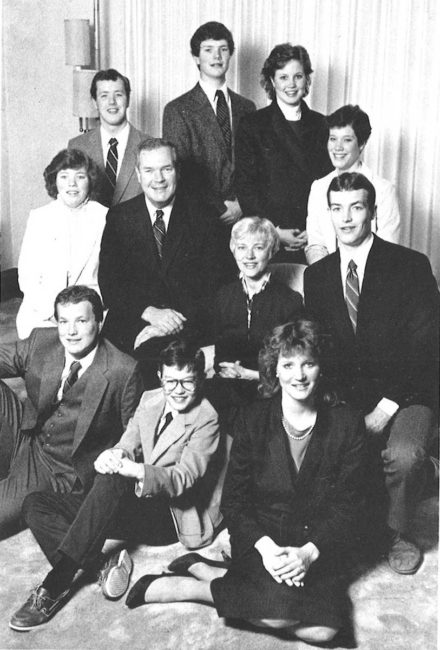 I actually think that after growing up the way I did, seeing county government the way I did, reading some of the big reports that come out about the community with the highest concentration of poverty, that kind of thing, I think a lot of that comes down to race and a lot of our problems could be solved if we could do a better job with our race relations.

We set out to do that in a very calculated way in county government and we’ve had success. But we don’t have the highest levels of poverty, we have the highest concentration of poverty. And that exacerbates the situation for the people that are living in poverty because they don’t have a neighbor that’s in a position to be helpful because they have their own struggles.

It doesn’t take any kind of social scientist to notice if you drive around this community that we live in a very segregated community and that’s where these concentrations of poverty are and that’s where we have issues with crime. All of the real thorny issues that we have as a community I think can all be helped if we could do a better job of including everybody.

Are there any programs you probably would never have thought of if you hadn’t experienced the county bureaucracy?

Onondaga County now has personnel inside the schools. Onondaga County was never inside the schools because we don’t have any responsibility for schools. The city does, and then all of the school districts are independent. But we do know that families in crisis end up at the Civic Center, and by then sometimes you’re a lot further into the crisis than you needed to be. We’re now in over 50 schools.

We started in the city because that’s really where the issues were. If a student comes to school and something’s not right and we have personnel in the building, we can nip things in the bud. Those efforts have contributed to the graduation rate in the city going from 49 percent when I started here to 61 percent last year. And that’s hundreds of kids who are getting the tools they need to succeed and won’t be part of the expensive social services.

How about hiring within the county government?

The year before I started, 542 people were hired in county government and 63 of them were minorities. In 2017 we hired 514, so our government got smaller, but the number of minorities increased from 12 percent to 29 percent. People in roles like mine have to stop saying, “There’s nobody qualified for the job.” Why aren’t they qualified? The schools. We need to fix the schools.

Considering the segregation and the concentrated poverty, what’s the future of this county racially?

I think it’s getting better. But when I see it I always had two arguments for people. One, it’s the right thing to do to make things more equitable and if I can’t convince you that you should just do the right thing because we’re all human beings and we all live here together, then I will tug on your wallet instead of your heartstrings because there is a real cost to the way we live right now.

We have to take tax dollars in the furthest suburban regions to help pay social services’ cost for the people that we failed. We haven’t given these people the tools to succeed on their own. Now we as a community have to pay for that. We’re all in this together. It’s not just a nice thing to say