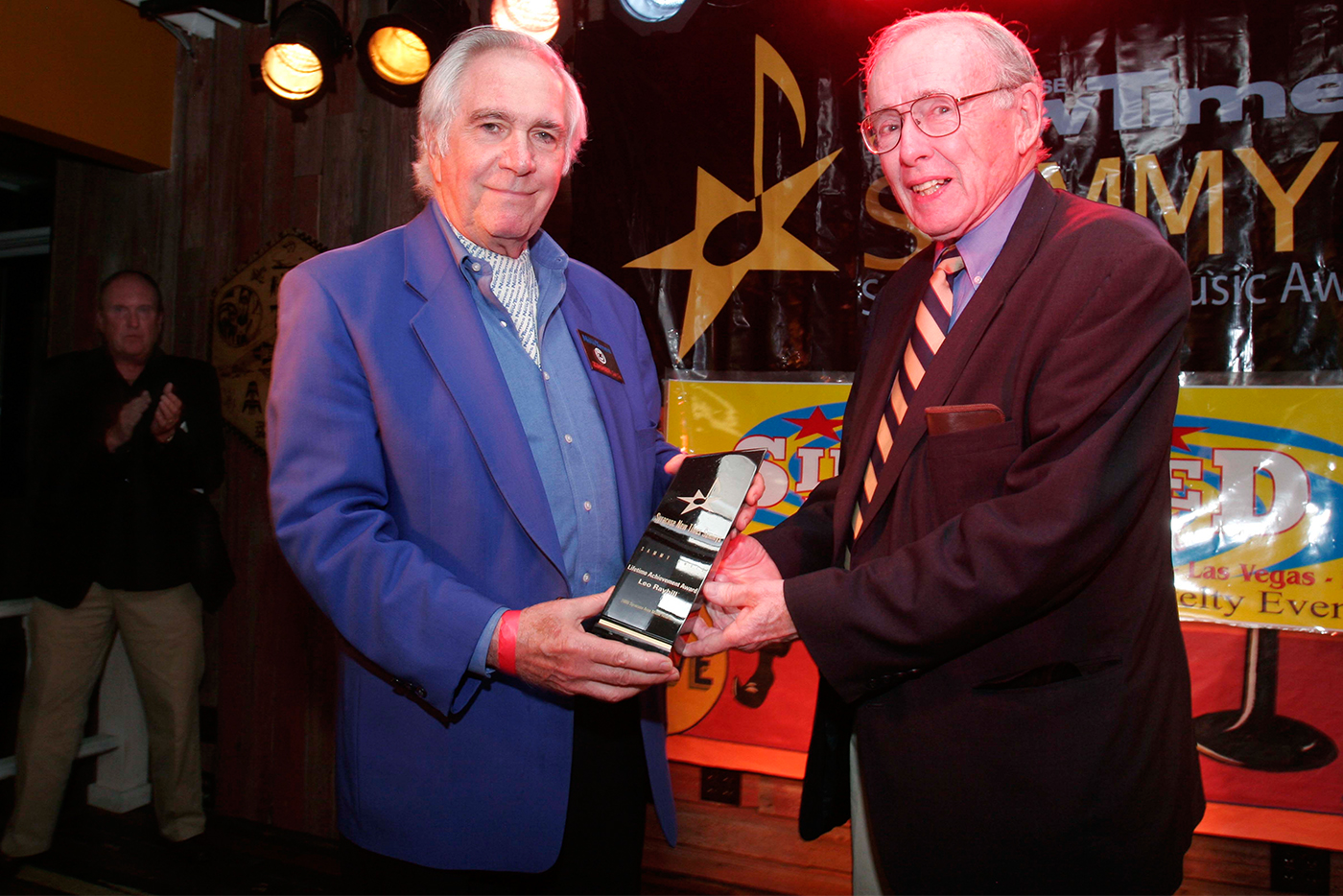 “I swear he was drunk when he recorded this,” said Leo Rayhill as he listened to Turk Murphy and his San Francisco Jazz Band’s 1972 hit, “Saloon.” Conducting and singing along with Murphy in WCNY-FM 91.3’s recording studio, Rayhill grinned at his co-host, Jim Aroune, vice president of television and radio at WCNY. “You gotta love this one,” Rayhill said. “It’s my theme song.” Next came a hit from the 1980s, then the 1950s, and back to the 1970s.

As WCNY continues its 50th anniversary celebration, Rayhill still conducts his Sounds of Jazz radio program the old-fashioned way: with CDs instead of digital files. On the desk beside his microphone, two smart Egon Ehrlinspiel shopping bags sit packed full of discs, and Rayhill handpicks his playlists on the fly.

He hands his selections to Aroune with a “play track eight, it’s got a great swing to it,” or a “let’s hear the first one, she did this in one take.” Aroune, along for the ride, pops the discs into the player and keeps the energy in the room high between selections.

Sounds of Jazz used to be live instead of recorded. From 1971 to 2009 it played five nights a week at dinnertime instead of just Sundays at 3 p.m. And until a year ago, Rayhill used to run the booth by himself. But times have changed: At 88, Rayhill is finally accepting a little help after more than 50 years on the radio. Every Thursday at 8:30 a.m., a nurse wheels Rayhill into the station — he lost the use of his legs due to illness earlier last year — and sets him up at the microphone facing the window to catch the morning sun. He dresses warmly; a faded blazer covers Rayhill’s frame and combats a slight chill in the booth. As soon as Aroune points to let him know they’re recording, Rayhill sits up straight. Brown eyes brighten behind his glasses.

He announces each work without fanfare. Just a little detail or trivia about the recording or the performer, and then on to the music. But he has something to say about all of them, no matter when they were recorded.

Rayhill, a Utica native, has been with the station since the first day WCNY-FM went on the air, but his radio career began even earlier during his time at Hamilton College. “I had a big audience back then,” Rayhill said. “I think my mother listened every other week.”

He made his living in the roofing business, but he went to jazz venues around Central New York with his father and developed a lifelong passion. After decades of listening to records and hanging out in clubs, Rayhill is an expert.

Rayhill has a soft spot for early performers such as Glenn Miller, but he is also excited about where the genre is headed. “Young people are so much better educated in music and jazz improvisation than my generation was,” he said. “There’s some very brilliant young people going into it. The opportunities for them are so great.”

Theo Cateforis, professor of music history at Syracuse University, said that jazz is achieving the same standing as classical music. “Jazz has reached a point where it is taken seriously as a conservatory-level genre,” Cateforis said. There has been a recent push in education to promote jazz as “American classical music,” he said.

Because jazz developed parallel to the rise of recording technology, the genre matured at an accelerated rate compared to classical music. Even though it is a comparatively young genre, there is already a dichotomy between the standard favorites — the music of Duke Ellington or Miles Davis, for example — and the more avant-garde, experimental jazz of the 21st century.

And Rayhill loves it all.

“He is the keeper of jazz for all who could ever hear WCNY,” Aroune said. “Generations of people have recognized him as the person who can take them back to jazz’s infancy or what music in the genre sounds like today.”

During its many years Rayhill has interviewed some huge names for Sounds of Jazz. One of his favorites, Louis Armstrong, only intended to appear for a minute but stayed on the show for two hours.

“Best interview I ever did. I don’t think I ever opened my mouth,” Rayhill said, laughing. “I learned a long time ago, if you get somebody like Louis Armstrong, Count Basie … that type that has something to say, you’re better off letting them talk. It’s much more interesting to the audience to say than to hear me! What have I got to say?”

Rayhill has plenty to say: He’s keeping an eye on contemporary performers, some in jazz (“Well, I love Tony Bennett; he’s marvelous.”) and some otherwise (“People kid me, but I love Lady Gaga. I think she’s fantastic.”).

Gene Romano, 87, a lifelong friend of Rayhill’s who grew up in the same Utica neighborhood, has appeared on Rayhill’s show several times. “He is well known for his contributions to music in the Central New York region,” Romano said. “I don’t know anybody that doesn’t love the guy once they meet him.”

In addition to the FM programming, WCNY Public Media also offers an online streaming service, and one of the channels explicitly features jazz. Rayhill’s recorded voice broadcasts twice daily on the streaming service.

As WCNY-FM celebrates its golden anniversary, Rayhill is a part of that history, said Aroune. “He’s part of the identity of WCNY radio,” he said. “He remains one of the foundational voices.”

Because of his illness, Rayhill doesn’t make it to the clubs anymore, but that hasn’t deterred his love of jazz or his program in the slightest. “I live off my records and I live off my memories,” he said with a gentle smile. “And I love doing the shows! It’s been a big part of my life.”

Leo Rayhill’s Sounds of Jazz started at the former WQSR in April 1962, followed with other stints at WPAW and WHEN before finally settling at WCNY in 1971. He was feted at the Syracuse M&T Jazz Fest in 2004 and received a Lifetime Achievement Award from the Syracuse Area Music Awards (Sammys) in 2009.