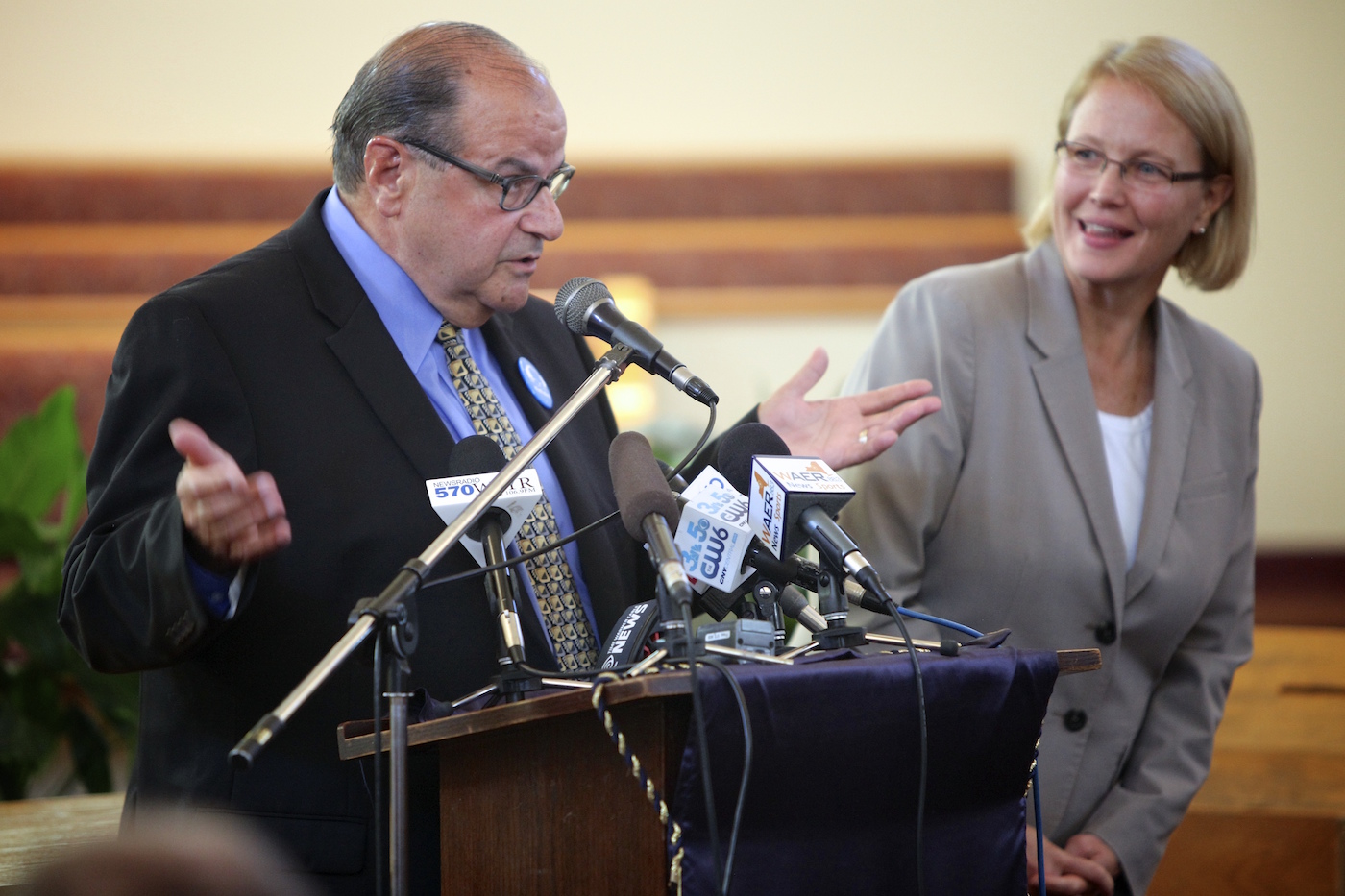 Jazz Fest is staying put for at least another year.

The recent fervor concerning Onondaga County’s ultimatum about moving the Syracuse M&T Jazz Fest from the Onondaga Community College campus to the Lakeview Amphitheater gave members of the community ringing ears. Jazz Fest impresario Frank Malfitano, on vacation at the time of the media squeal, came back early to clear the air when he set up a Sept. 21 press conference at Second Olivet Missionary Baptist Church on Syracuse’s West Side.

Malfitano invited County Executive Joanie Mahoney to the event, as she cordially reinforced the duo’s friendship and the county government’s full support of the annual music festival. Several times during her time at the lectern, Mahoney repeated variations on her declaration that “decisions about Jazz Fest logistics should be left to Frank.”

To prove his point about the free festival, Malfitano reinforced the origins of music and community. “We’re in a black church because this is where the music we present at Jazz Fest was born,” he said. “I don’t know how to repay that debt ever, but gospel came from the black church, and that led to rhythm and blues and blues and jazz.”

The peaceful setting, with pastor Rev. Cyrus L. Thornton giving his blessing, gave the opportunity for Mahoney and Malfitano to publicly kiss each other on the cheek and hug several times.

What it came down to was some profound miscommunication — acknowledged by Malfitano and Mahoney — and a misunderstanding on the public’s part. “It’s been overexaggerated,” said the county executive, who jokingly chided Malfitano because he does not own a cellphone. “The chatter on social media helped perpetuate negative and positive responses.

The festival was wedged into the County Parks Department section of the proposed Onondaga County budget. The 450-page budget will be finalized shortly and will be followed by a public hearing on Thursday, Oct. 6, and voted on five days later.

Malfitano said Onondaga County has always “stepped up to the plate.” Out of the county’s proposed $1.3 billion budget, his festival totals a drop in the bucket: $75,000. Aside from sponsors M&T Bank, Price Chopper, C&S Companies, National Grid and several other contributors, Jazz Fest does not recieve city, state or federal funding.

“I try to navigate the Good Ship Jazz Fest through political waters. We don’t always vet things with the community perhaps the way we should,” he admitted. “This time we’re going to do it right. We’re going to be very transparent.” He said the festival raises $400,000 per year and receives $200,000 in donations of goods and services.

As far as trying to find the monetary investments, the recent publicity has put the 2017 county budget ahead of the game, according to Mahoney. She even joked that if the public told the County Legislature that she was against allocating more money to the event, the members — even the staunchest conservative Republicans — would vote to give more.

Whether or not Jazz Fest moves from Onondaga Community College to the Lakeview Amphitheater beyond 2017 is up to Malfitano, said Mahoney, who often expressed her hope that such a move might eventually happen. She cited the amphitheater’s sound system as a plus. However, she acknowledged that Malfitano still had one more year remaining on the OCC contract with Jazz Fest.

Malfitano labeled Lakeview a “world-class venue” after seeing several summer concerts featuring Ringo Starr and Hall and Oates. “We would have to take a hard look at the Amp and think the venue through,“ he said. Yet Malfitano also spoke fondly about OCC’s attributes, such as the story of meeting his wife there, as well as Jazz Fest’s campus presence offering an opportunity to entice future students.

The 70-year-old Malfitano noted the upcoming 35th festival will be a milestone that only about a half-dozen other jazz festivals across the country have accomplished. “I’ve been doing this half my life!” he exclaimed.

Syracuse’s nomadic Jazz Fest has graced several places throughout the county, including Jamesville Beach, Long Branch Park and Clinton Square. Malfitano admitted to some setbacks along the way, especially the 1983 stint at Song Mountain Ski Resort (“I stumbled. I fell. I failed,” Malfitano said about his past festivals. “But I got up!”), but he also boasted about having to move from downtown to the college because of the increasingly large crowds.

The press conference lured local musicians including Frank DeFonda, Paul Davie and Dave Hanlon, as well as small business owners such as Tom Greenwood, who runs a an East Syracuse winery. Greenwood praised Malfitano for his work and loyalty to local enterprises, bringing in and showcasing small businesses, especially those involved in the beverage and agriculture industries.

“Jazz Fest more than returns the investment to Onondaga County,” Mahoney stated. “Frank is one of the few people in this county you can point to for making big things happen. I defer to the expert, and we’ll do it where you want to do it. You have my full support.”