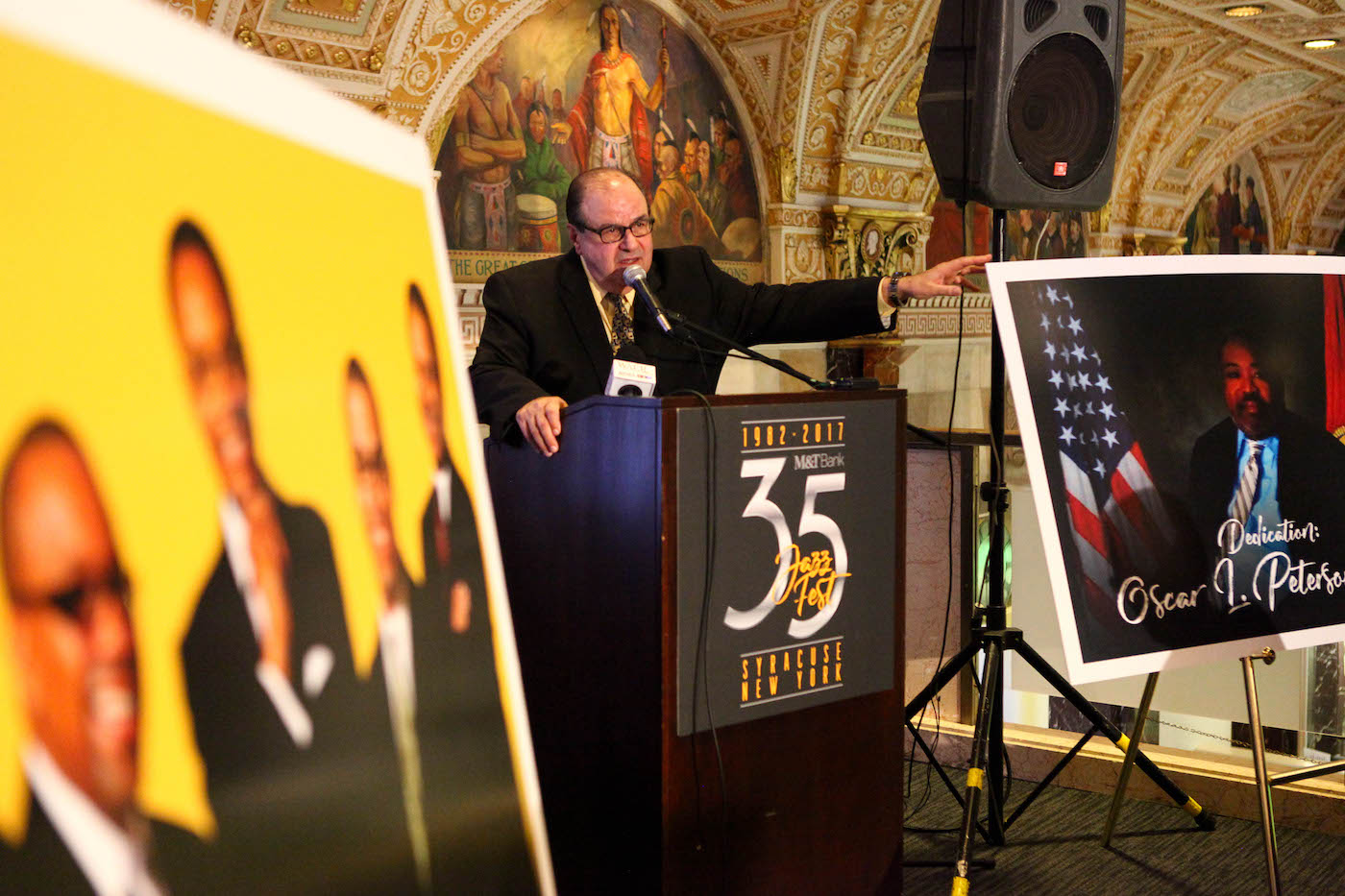 “These 35 years represent a collective achievement of everyone in this room,” Jazz Fest founder and executive producer Malfitano said to the gathering of political movers and shakers, musicians and more during the Feb. 22 press conference. The announcement was held at M&T Bank’s downtown headquarters at the historic Onondaga County Savings Bank building, 101 S. Salina St.

Local talent will also be on hand during the weekend. Joined Artists Musicians & Singers coalition (JAMS) will present UAD: Kings of the Fall, a Temptations-esque group, on Friday, plus Soft Spoken Band the following evening. Each group will feature collaborations of local vocalists and musicians, including Steve Brown, Dino Lostito, Mike Melito, Joe Carello, Melissa Gardiner and more.

This year’s event will be dedicated to longtime festival president Oscar L. Peterson Jr., who died last October. Many more will be recognized, according to WAER-FM 88.3 director and general manager Joe Lee. After reading a list of names, including Mose Allison, Al Jarreau, Larry Coryell, Buckwheat Zydeco and others, he asked for a moment of silence.

“I started singing in fourth grade, which was about four years ago,” Canen said. “Something about jazz spoke to me. Every time I sing, I disappear into this other world.” When Canen gets on stage, she says, she is in the zone: It’s just her and the songs. Canen said she practices and performs as much as she can, even while singing “as jazzy as she can” to her homework. “Two plus eight is 10,” she sang with a smile, demonstrating an off-the-cuff example. Her vocal prowess shows off a whispery smokiness, which isn’t muddied by Common Core requirements.

Her music teacher Terry Burns introduced Canen to Lazarus; the teen admitted she was “freaking out” leading up to the meeting. Yet she remains humble and composed, aside from the anticipation of sharing the Jazz Fest stage with people she describes as “amazing performers.” She feels she is too young to block off her entire life for music because of having too many interests, and believes there is so much more to learn.

“Frank has recognized the talents who have been recognized by Extraordinary,” said Lazarus. She also announced that Nick DiMaria, another featured performer of her nonprofit, and a current freshman at Manhattan School of Music, will be performing with the Manhattan Jazz Alliance.

Alliance is the key word for Syracuse Jazz Fest’s longevity. Lee mentioned WAER’s 35-year commitment to the cause, while M&T Bank Syracuse president Allen Naples talked about the bank’s 25-year sponsorship. Andy Schuster, an OCC professor of art history, discussed the Jazz Fest-dedicated exhibit that will run at the college’s Ann Felton Multicultural Art Gallery from May 15 to June 15. Onondaga Historical Association executive director Gregg Tripoli revealed that a photographic exhibit about the festival will run May 3 to Oct. 3 at the OHA, 321 Montgomery St.

“We’re pleased Frank invited us to add another dimension to Jazz Fest,” Fawcett-Shapiro said. “Everywhere you go, film and music are always together. There is a fabulous film festival in Bologna, Italy, we go to every year and there is a big jazz festival that happens at the same time. People spend hours going between the films and the jazz.”

Onondaga County Executive Joanie Mahoney showed up a bit late to the press event, so Malfitano personally walked her up from the back of the room. “It’s a great pleasure to bring up our late arrival, but she’s always welcome no matter when she comes,” Malfitano said. The pair revisited their Sept. 21 press conference held at Olivet Missionary Baptist Church, when they addressed the supposed rumor that Mahoney wanted Jazz Fest relocated from the OCC campus to the Lakeview Amphitheater.

“She’s always been a great friend of the community,” Malfitano extolled. “Since she took office, she’s been helping us in more ways than I can enumerate. This is the lady who has been our champion.”

Mahoney retold the story of her longtime Jazz Fest fandom, ever since the 1980s when she wore a trash bag as a parka to escape the rains. She assured attendees that there is only “a little group that opposes everything” she supports.

Yet she does support Malfitano, the man who after 35 years continues his promise of a great show — and one with free admission to boot.