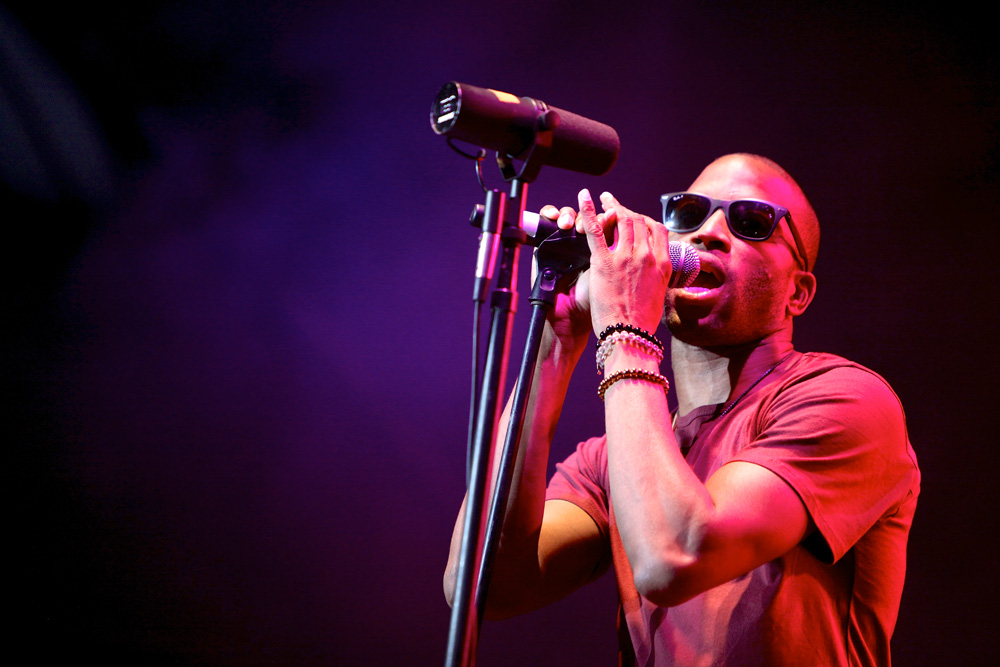 It was Darmon Meader who characterized the obvious, even if he couldn’t realize the scope of his observation. “Welcome to the Windy City,” he intoned in his introduction to the tribute to the late singer Mark Murphy, referring to the gusty breeze that scoured the Onondaga Community College campus and rattled the stage on Saturday, July 2, the opening day of the 34th annual Syracuse M&T Jazz Fest. The weather notwithstanding, it was the wild torrent of artistry of many stripes that surged across the stage that defined the day. Meader and the New York Voices, a vocal quartet he co-founded in 1987 at Ithaca College, were joined by an eight-piece all-star amalgam of big names and local talent, including festival artist-in-residence Randy Brecker on trumpet, saxophonist-educator Joe Corello and veteran singers Ronnie Leigh and Nancy Kelly. Playing through some persistent PA problems, the group focused on selections originally written as instrumentals and later fleshed out with lyrics, including Herbie Hancock’s “Cantaloupe Island,“ Freddie Hubbard’s “Red Clay,” sung by Ronnie Leigh, and Miles Davis’ “All Blues.”

Referencing Murphy, a native of Fulton whose unique phrasing has had long legs, Kelly, who covered “This Could Be the Start of Something Big,” admitted that “Mark Murphy is the reason that I sing jazz.” Later New York Voices vocalist Lauren Kinhan seconded the emotion, referencing Murphy’s unique “crazy-ology phrase-ology” in renditions of “You Go To My Head” and Oliver Nelson’s “Stolen Moments.”

This cast of familiar names was preceded by Notified, the precocious but surprisingly mature college jazz ensemble making its second consecutive Jazz Fest appearance. They attacked “Some Skunk Funk,” a bop-fusion-funk composition of Randy Brecker and his late brother, the saxophonist Michael Brecker, and shook it up with a furious poise before descending into Herbie Hancock’s ethereal “Maiden Voyage.”

Joined by Baldwinsville vocalist Julia Goodwin, the sextet touched on both sides of the bop era with selections from the Great American Songbook (“Ain’t Misbehavin’”) as well as “Signed, Sealed, and Delivered,” and “Fever,” and even the noir blues from Jay Hawkins, “I Put a Spell on You,” which Goodwin mistakenly credited to Annie Lennox. Carefully respectful of tradition, Notified was also not hesitant to add weight, often crescendoing into steroidal proportions, giving way to a youthful temptation.

Like Randy Brecker, who first appeared with the jazz-rock band Blood, Sweat, and Tears, keyboardist-singer Michael McDonald’s provenance lies in 1970s rock with the Doobie Brothers. Although the repertoire that he brought to close the evening on Saturday is the result of a long maturation and evolution, the smoky-voiced baritone/tenor has not abandoned his roots. After dispensing some thinly veiled political advice (i.e. don’t vote for Donald Trump), and with the help of vocalist Drea Rhenee, who claimed center attention at times, McDonald reprised a string of signature blue-eyed soul hits, including “What a Fool Believes,” “Minute By Minute” and “It Keeps You Runnin’.”

McDonald’s climaxing set would have been the evening’s shining moment had it not been for The Mavericks, who preceded him on stage. Producers like Jazz Fest impresario Frank Malfitano, who has brought this free event to Syracuse year after year, know that a jazz festival with no variety doesn’t draw well and that there is a broad scope of tastes to please. A year ago the stellar bebop ensemble the Upstate Burners received polite applause for their efforts, only to be overshadowed by Lake Street Dive, an innovative pop-rock act that brought the crowd to its feet.

The Mavericks, an alt-country quartet with norte/conjunto (Tex-Mex) flavoring and the charismatic front man Raul Malo, did the same on Saturday. Adding elements of swing, rock and big band sounds and plenty of lively stage shtick, they had the audience dancing in the aisles by rolling through their favorite rave-ups such as “All You Ever Do is Bring Me Down” and the Cuban staple “Guantanemera,” which segued into an infectious Beatles-esque “Twist and Shout” that the dancers found irresistible.

Unlike the contrasts of the previous day, the program on Sunday, July 3, was a day of sustained grooves and unrelenting motion. Following a set by the Stan Colella All-Stars, the youth-jazz incubator led by jazz educator Joe Corello, the Second Line Syracuse Brass Band and Los Angeles-based Groove Legacy established a cardiac momentum that carried the day into the evening.

Second Line Syracuse followed, and quickly pressurized the atmosphere with a repertoire of traditional New Orleans street cadence, down-home funk, and innovative arrangements from its leader, trombonist, vocalist and composer Melissa Gardener. A rarity among brass players, Gardener proved herself to be an able soloist where competition is tough, as she led the nine-piece ensemble (with six horns) through a set of exuberant covers including Sonny Stitt’s bebop standard “Eternal Triangle,” a quirky version of the Rolling Stones’ “I Used to Love Her,” and her own “Sunset,” a pensive study in collective dissonance. Groove Legacy, essentially a Crusaders tribute band, had no trouble taking the cue, and laid down a sustained funk, segueing one tune into the next, never letting momentum slacken. Led by Syracuse native Paulie Cerra, a rhythm’n’blues saxophonist in the tradition of Maceo Parker and trombonist Andrew Lippman, the seven- piece ensemble sustained the soul tradition established by the Crusaders, the Meters, and the JB Horns.

The evening’s music began with a reunion of the Eleventh House, a 1970s fusion band. Originally led by guitarist Larry Coryell, the quartet features original members Alphonse Mouzon (drums), Mike Mandel (piano), John Lee (bass) and Randy Brecker (trumpet). Like much of the genre, the set from the Eleventh House was all about speed and technique, where the mechanics of performance trumped notions of melodic construction. Coryell, who was too ill to participate, was replaced by his son Julian, a fiery guitarist in his own right.

Jazz Fest 2016 came to a head later when Trombone Shorty, aka Troy Andrews, and his band Orleans Avenue took the stage. Andrews, who appeared at the festival in 2014, has proven to be a consummate entertainer, equally comfortable on the trombone and the trumpet, and as a singer-dancer. His nearly two-hour set was packed with tight horn grooves and infectious rhythms, energizing a capacity crowd. At the end everyone seemed happy, especially Trombone Shorty, who pledged to return at the next opportunity.

Love and Death in Pearl Harbor
Cream of Rice
To Top