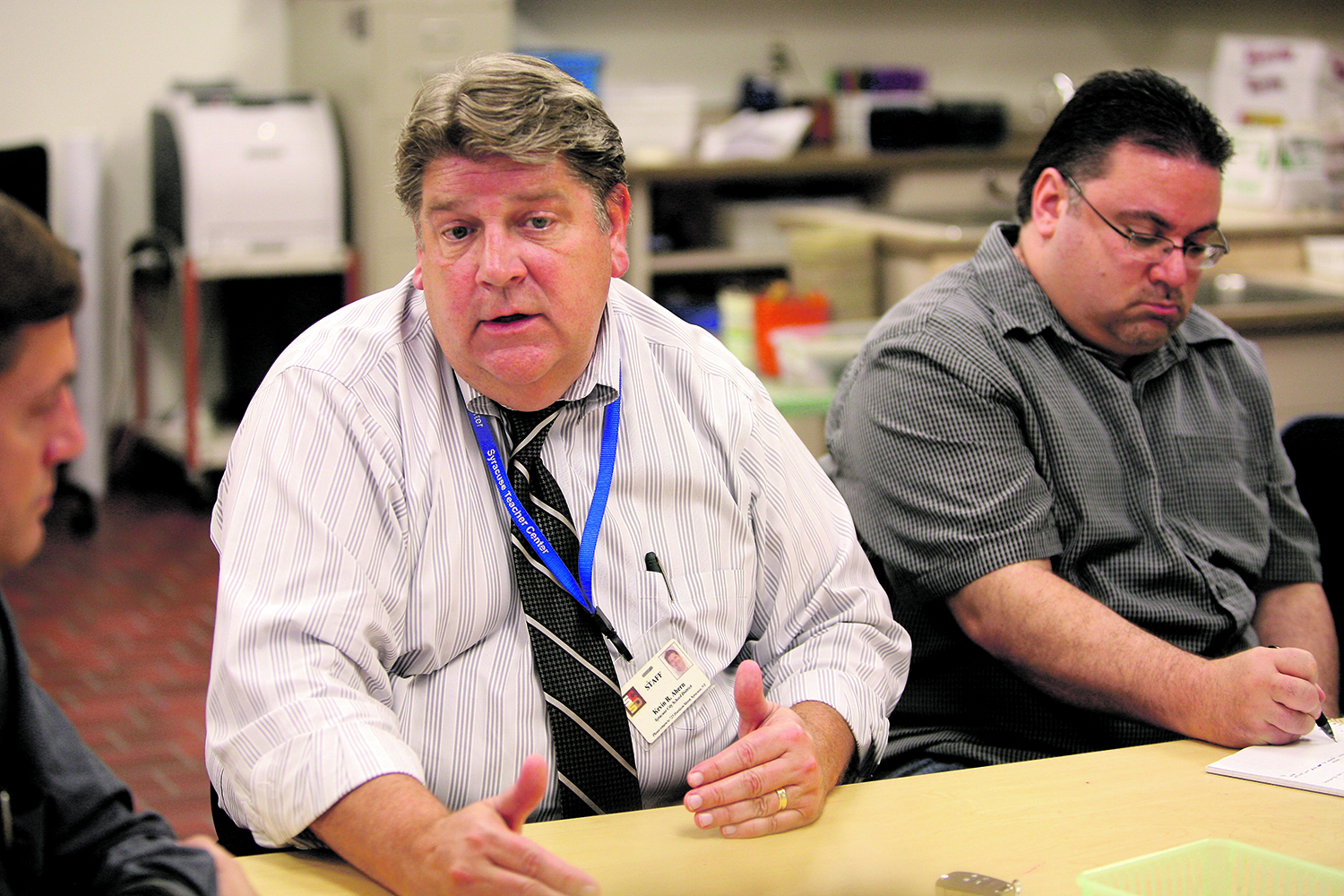 Some observers, including Gov. Andrew Cuomo, have argued that the mismatch between high teacher effectiveness ratings and low school ratings based on exam scores demonstrates that the teacher evaluation system needs to be toughened. Is there something wrong with that logic?

That’s based on the faulty notion that kids’ performance on standardized tests is solely caused by a teacher’s effectiveness in the classroom. The measurements don’t take into account so many factors that classroom teachers simply can’t account for.

What are the main reasons the city schools score low on these measures relative to other school districts?

Poverty is part of it. It affects kids differently, but certainly all the research shows that when you have high populations of poverty in a school district, kids will struggle. We see, for example, in the early grades kids come to school not necessarily ready for the work. Starting in kindergarten and as early as pre-K they are behind in reading, they are behind in speaking. That’s a huge issue, so we end up with a lot of kids who are behind when they start moving to the upper grades. And once they are significantly behind, we don’t have the resources to really bring them up to where they should be.

Absolutely, the success of our kids in our schools and the success of the school system is a communitywide concern, and it will take a communitywide effort to really start to get things on the right path. There are so many things our kids need in terms of mental health resources, social support. But it’s more than that. One of the things that really is a problem here in Syracuse is its economy. We need to develop a strong economy here, meaning jobs in particular. Jobs are the antidote to poverty. And we have lost so many jobs, certainly since I was a kid growing up in the system. The city seems to be in a bind when it comes to education. It doesn’t have a robust private tax base for funding it, so it relies very heavily on the state.

People call for more state aid but we are where we are right now. Does the city somehow have to find a way to put more money into this system?

We can’t just keep saying that the state needs to provide more money, if that money doesn’t come.

I think the city should try to find ways to do that. The makeup of the city’s tax base makes it difficult to overcome. There is a real need for commitment from everybody in the community to start working closely with our schools and helping support them, and that may mean different things to different groups and different entities in the city. But I certainly think there is an obligation to do that.

At least going by his rhetoric, Gov. Cuomo has almost declared war on the teachers’ unions. He has proposed a new system of evaluation which is more heavily based on student test scores.

Is there anything in his new plan that you support or your organization would go along with?

No. The governor is simply wrong, and this is clearly a political tactic to a large degree. The unfortunate part about it is that it affects kids first and foremost. His agenda is bad for kids. But it’s also really hurting the profession of teaching and scaring people away.

What is it that’s bad for kids?

When you have a system that relies on this kind of measure-and-punishment mentality, teachers by nature will narrow the curriculum significantly and focus on testing, testing and more testing, which really deprives kids of the kind of rich education opportunities that I grew up with when I was in school in the district. Most parents would want to provide their kids with those kinds of opportunities. As well as the governor’s budget—even under the best-case scenario we are significantly short of funding.

Do you feel under siege by the governor?

I think we certainly do. It didn’t start with the governor; it started a while ago with Race to the Top. No Child Left Behind was not great for us, either, but Race to the Top ratcheted everything up, because it became very clear that for districts in need to get money, they would have to (adopt) these measure-and-punish ideas, like the teacher evaluation piece.

Do you think in some of the rhetoric that teachers are being demonized?

Last summer, the state attorney general found that the Syracuse City School District was discriminating against non-white students in the way it practiced discipline, particularly regarding suspensions. You are now operating under a new code of conduct when it comes to discipline.

What are the teachers telling you about life under the new code?

There are a lot of pieces of this new code that have to be rolled out. They include a lot of training for everybody involved, certainly teachers but everybody: the entire staff who work in buildings, the administrators, support, etc. This is a huge lift for the district, because there is so much training required. It’s a completely different philosophy and it requires people taking on different roles. To provide that training across a district with 3,000 employees, especially an under-resourced district, the implementation has not been smooth. It continues to be a challenge.

Any improvement in student behavior in the classroom?

Not from what I have heard. Anecdotally, teachers are telling me that there is an opposite effect right now, because kids are feeling somewhat empowered because they know they won’t necessarily be suspended. The other piece is the kind of consequences that they should be having. The discussions and peace circles and things like that aren’t happening.

I’ve heard anecdotally about the classroom environment being a tough one for learning. Things are disruptive. I’m wondering whether teachers feel limited in their ability to create better learning environments under the new regime.

Absolutely, and I think they are frustrated about that. A big aspect of this is the leadership in the building in terms of the administrators. I think they have struggled with this new code, in understanding it as well as implementing it. When kids are persistently disruptive in a classroom, a lot of times they’ll continue to be sent back, with no change in their behavior. I think some of that is a failure on the administrator’s part to really adequately deal with that child.

Also last summer, your union voted for a resolution of “no confidence” in School Superintendent Sharon Contreras. What motivated that?

The one that got the headlines had to do with the culture in the schools and the whole behavior issue. But there was a host of professional issues with the superintendent: the way we implemented the new evaluation piece, the way teachers were being treated, the implementation of the Common Core. We’re just very unhappy with a lot of the internal things, and the way our folks are being treated. It’s not just teachers; we represent food service workers, teaching assistants and school nurses. We were very unhappy in terms of our professional treatment and we wanted to make that message loud and clear.

Looking back on it now, do you think it was a smart move?

People frequently allude to the political power of teachers’ unions. How powerful do you think you are?

It certainly doesn’t feel like we’re terribly powerful. I live in this city by choice. We’re really interested in improving conditions for kids, and learning for kids. This is our primary focus, and it always has been. Our contract reflects that. In that regard, I wish I had more influence on how the school district did the things that they do. I have spent years in this position developing relationships with people in power in this city so that I can have some influence, and I think that is the most important piece of it.

What do you think we are going to be saying about the city school system 15 years from now?

I hope we would be saying that it’s back and that it is coming on strong, that we are starting to see a thriving, creative, nurturing school system, and that we’ve gotten the support from the community that we need so desperately, and that our kids are beginning to thrive.