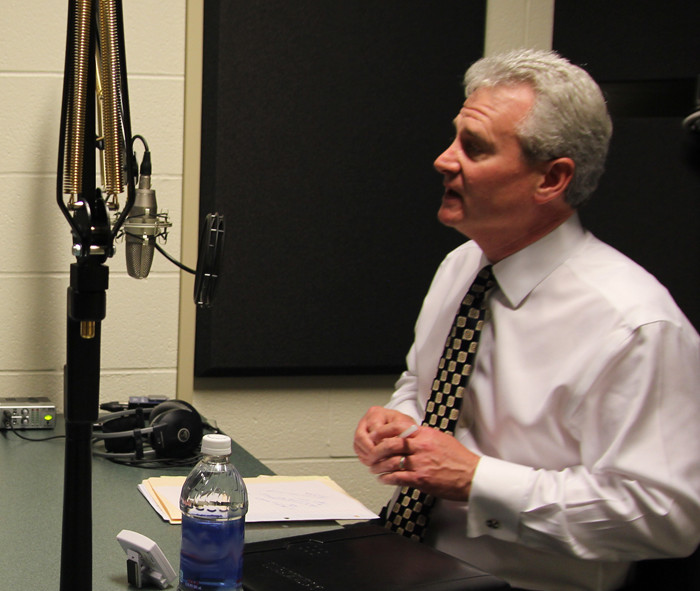 Lincoln Chafee is the governor of Rhode Island.

Lincoln Chafee is the governor of Rhode Island. He was elected in 2010 as an independent, having left the Republican Party after a re-election defeat for the U.S. Senate in 2006. In 2013, he became a Democrat. Before serving in the Senate, Chafee served on the Warwick City Council and as that city’s mayor.

Grant Reeher (GR): When you were in the Senate, apparently, there were some tensions that came up then between you and the Republican Party. You were the only Republican in the Senate to vote against the War in Iraq. Is that correct?

Gov. Lincoln Chafee (LC): I think really, just to back up: the tax cuts. Before Sept. 11, that was the first real battle: these huge tax cuts that favored the wealthy and made no sense. We’d fought so hard to get surpluses over decades, finally achieved them, and here came in a $1.5 trillion tax cut that favored the wealthy. For the president, to ram that through with only two Republicans voting against it, I think set the stage for a strong executive feud — it made no sense that we finally took these surpluses and squandered them. … A better way to use this new money, surpluses we generated, would be to invest in our country and in education and infrastructure, and yet we gave it all back to the wealthy, and so I lost my faith in the president and the vice president’s decision-making then. … So when the march to war in Iraq came, and the premise that there were weapons of mass destruction, I just didn’t believe it. I’d come not to believe what they said, and I just never saw the evidence that Sadam Hussein had weapons of mass destruction.

In fact, I went down to the CIA and I said, “I have to vote on this. Can you show me everything you have that might show these weapons of mass destruction before I go in and vote?” … And there were about 20 analysts at a table, and they showed me satellite pictures and different maps and things, and it was just totally unconvincing. … What I noticed more than anything was that those 20 CIA analysts — there weren’t any directors or anything like that, but they were the analysts — it was their body language. They weren’t going, “Senator, you’ve got to see, there’s this absolutely convincing chemical weapons lab!” There was none of that. “You’ve got to see this missile launching site!” It just wasn’t that. They unrolled the maps and they stood back, and so I said to myself, “They don’t even believe this.” And then finally they handed me an aluminum tube that was supposed to centrifuge uranium, something about uranium. I’m looking at it thinking, “I could buy this down at Mancini’s Hardware, in North Kingstown.” If there was another premise to go to war I would be willing to listen to it, I but I didn’t believe that Saddam Hussein had weapons of mass destruction. I was right in the end.

GR: I imagine you spoke in the Republican caucus. What was the reaction there?

LC: I remember standing up and saying I’d been to the CIA, and I was totally unconvinced. People just weren’t listening. I’d had good relations with my fellow Republican senators, and usually they listen, but on this one, their minds were made up. I remember (Sen.) Mike DeWine, from Ohio, saying to me, “I think you’re right, but everybody’s mind is made up.”

GR: So what finally pushed you to turn in your Republican membership card?

LC: Well, I was caught, because I was increasingly getting just disenfranchised and disaffiliated with the agenda of the Republican Party: environmental issues, fiscal issues, foreign intervention issues. But, I was in the majority party as a senator, the president won re-election in 2004, we had a Republican Senate, a Republican House, I was in position to deliver for Rhode Island being in the majority. If I left the party, my state would be penalized. … Rhode Island would get nothing. So I was kind of caught. … Finally, when I did not succeed in my re-election, I very quietly went down to my local board of canvassers and disaffiliated and became an independent.

GR: What prompted you to join the Democrats in 2013?

LC: I found governing as an independent harder than I thought. I know (governors) Angus King and Jesse Ventura have had success in Maine and Minnesota. I found it very, very hard, and the economy was tough in Rhode Island. People were stressed out. Small issues became big issues, and I had no political party that had my back during some of these tough times, and so I thought, should I join the Libertarians or join the Greens? What are my options? I knew I didn’t want to go back to being a Republican, and I made the decision to become a Democrat and was very happy. I think that the tradition of standing up for the middle class is really the key issue that I’m proud to be a Democrat about. For all my memory, that’s been a Democratic issue, we’re going to grow the middle class. Especially with the 50th anniversary of LBJ and the Great Society, grow the middle class – that’s the key to a successful community, city, country, state, whatever.

GR: What’s driving the polarization and the nastiness and dysfunction in Washington?

LC: Rush Limbaugh and talk radio, and you can add to that Fox News, and just the divide between what people are reading and listening to and watching. That certainly is a factor. … Many of the experts have talked about the primaries, and I saw it first-hand. … I had one myself in 2006 — I won it — from a candidate funded by the Club for Growth, an anti-tax group that funneled millions of dollars into various races, particularly into Rhode Island.

GR: This is back when you were a Republican, getting challenged from the right?

LC: That’s right, that’s right. Here I was in a very blue state, if not the most Democratic state in the country, trying to hold onto a Republican seat, and I get primaried by a right-wing Club for Growth Republican that had no chance in the general election, absolutely zero chance. It made no sense practically to challenge me, but it’s just for ideological purity. So these primaries drag the candidates to the fringes, especially on the Republican side with the Tea Party, the media.

GR: How do these things play out inside Rhode Island? Do you see the same kind of level of nastiness and polarization, or are things a little better inside the state?

LC: For my term as governor, we’ve had these, as I call them, “small issues” turn into big issues. Getting illegal immigrants in Rhode Island to have in-state tuition — to me, it just made complete sense to have these youngsters that are here finish high school, because they’re not going to finish high school if they can’t afford to go to college. And then to get into University of Rhode Island, or Rhode Island College or Community College of Rhode Island with in-state tuition. If they can’t afford the tuition, that’s not in our best interest as a society to have uneducated youngsters out there. But that became a huge issue with massive protests.
And I was involved in a capital punishment case. Repeatedly I’ve said in my political career that I’m opposed to capital punishment, and that’s a policy that you can question me on. That’s how I was elected. That became a big issue. A Christmas tree all of a sudden, a war on Christmas? I mean, that’s not why I got into public service.

GR: You were calling it a holiday tree, right?

LC: Yeah, my predecessor called it a holiday tree. When the time came to celebrate the holidays, I just said, “Do what they did last year. Don’t spend any more, don’t spend any less and do what they did.” And for some reason, it boomeranged back on me. So, I’ve seen this partisan kind of anger erupt in Rhode Island.

Next week: We continue the conversation with Rhode Island Gov. Lincoln Chafee.

A NEW WEEK: BACK TO A CALL FOR TOLERANCE
BIGOTRY OR RACISM?
To Top