Hinman uses a jawbone device called a “Fitbit” to track his rest.

“Tracking your sleep is crucial,” he said, “to get into a structured schedule of sleep.” Hinman said he will compete with himself to get more quality sleep, as the device tracks exactly how much deep sleep his body gets each night.

“Structure is very important,” he said, “Going to bed early, as well as getting up at the same time in the morning to train.”

Hinman says he has used these applications before, however he has never counted calories. Just “make sure you don’t overeat constantly,” he said.

Whether competing or training on a bike or on foot, Hinman says it’s important to know where your heart rate is as an athlete and where the hard-to-easy threshold is to alternate intervals and maximize performance.

Hinman uses the Garmen Bike Computer 510 and well as the Suunto Watch for running which tracks pace per mile, heart rate, laps, speed, strokes per length, power (for the bike) – all of which syncs with a cloud computer system and program called Training Peaks, which is a triathlete software that a triathlon coach will monitor for Hinman. Through this software the coach will also set workout programs and goals for him each week and track the level of fitness verses fatigue the athlete is working with before a race.

“It’s important to have less fatigue before a race,” said Hinman. He laughs commenting he can often run into the problem of working out too much, causing problems in getting his heart rate up, and he will have to take a day off.

In addition to tracking oneself, Hinman uses a competitive software called Strava which uploads his workouts to a portal where he can compete with other athletes worldwide in the segments (swim, bike, run) and achieve “King of the Mountain” on international leaderboards. This application helps push Hinman at all times to get a personal best even when training alone.

“It pushes you!” he said, “I think about it especially during the biking and it helps me crush a hill,” for instance.

In addition to the competitive nature that increases performance, the software also gives Hinman accountability with his coach. Clarke and other crossfit trainers will also use text messaging to reach out to members, especially if they haven’t seen them in the gym in a while.

Clarke, a crossfit coach in the area, is a self-professed “old school guy.”

“The programming Jamar does is tech in a way,” said Hinman, talking about the workouts Clarke prepares for himself and the members at Urban Life. The workouts are based on a system of increasing member performance and being able to push them to their maximum potential. 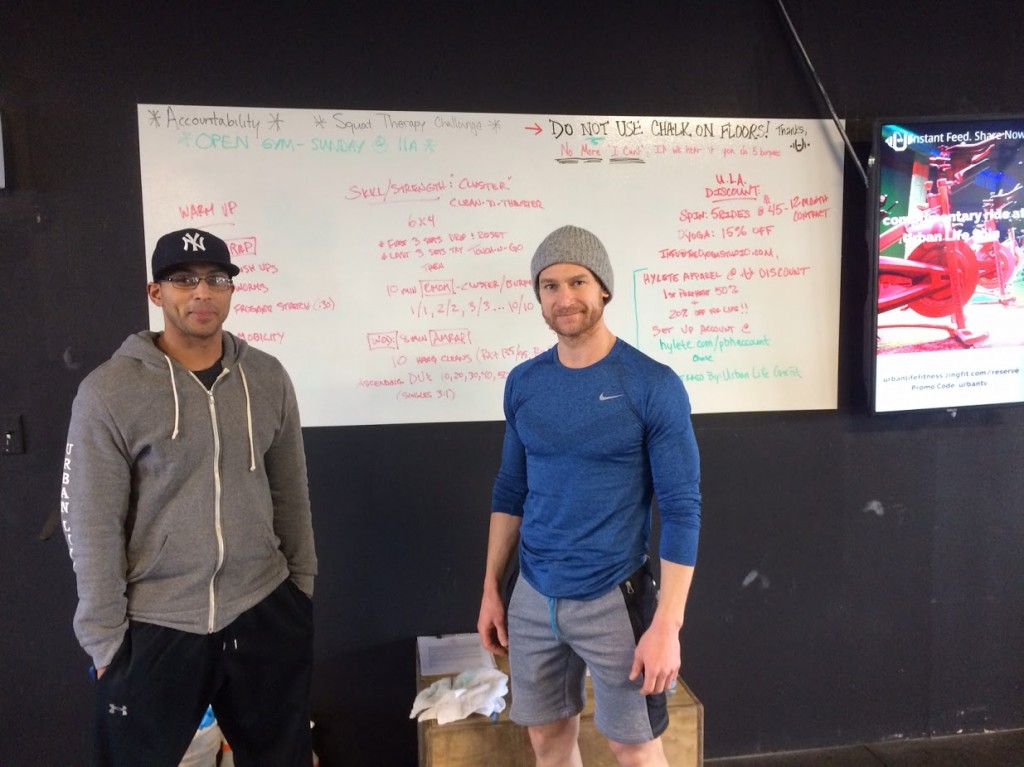 However, there was one piece of tech Clarke admitted was very important for him and the gym.

“And caffeine,” added Hinman, commenting that a perceived “level 9 out of 10” can be overcome through the motivation of music.

“Your body is stronger than you think,” he said, “You just have to trick yourself. The Ironman races: I just trick myself for 10 hours, that’s all.”

When asked if they could invent one piece of technology to aid them in fitness, they said a system that tracked all the various components and synced the different devices above mentioned would be ideal.

“I’d love to have something that automatically tracks everything,” said Hinman, “Something where you could input food intake, sleep, and training time, and it would give you feedback – ‘You didn’t get enough sleep!’ – etc.”

Clarke added the system would be able to coach a person into proper recovery as well.

Though technology is relatively a new addition to the fitness world, from the stopwatch to Apple Watch, it continues to evolve and provide new ways to optimize athlete performance and help people get into shape quicker and more effectively, minimizing risk of injury and aiding in long-lasting health.

We look forward to seeing what comes next.

For more information about Urban Life Crossfit or to talk to Eric Hinman or Jamar Clarke, visit their website at www.UrbanLifeCrossfit.com.