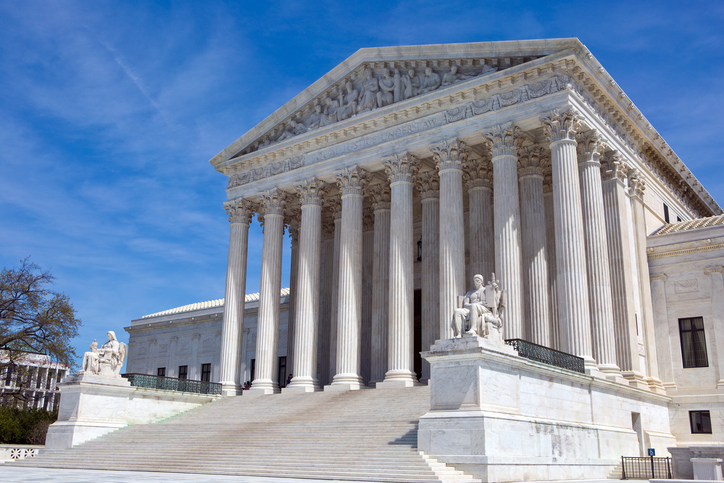 For the second time in two years, the U.S. Supreme Court will play a role in a national election. And yet, it’s rather the role of an election in the Supreme Court that actually laid the groundwork for the battle currently taking place on Capitol Hill.

In February 2016 when Associate Justice Antonin Scalia died, Republican Senate Majority Leader Mitch McConnell said President Obama should not appoint Scalia’s replacement. He argued that because it was an election year, voters should have a say in the matter and choose the next president, who would then select a new Supreme Court justice.

“The next justice could fundamentally alter the direction of the Supreme Court and have a profound impact on our country, so of course the American people should have a say in the court’s direction,” McConnell said at the time. McConnell refused to vote on, or even hold hearings for, Obama’s nominee, Judge Merrick Garland.

That stance is why many congressional Democrats are now crying foul. After Associate Justice Anthony Kennedy announced at the end of June that he would be retiring, many Democrats wanted McConnell to follow the same decree and wait until after the midterm elections this fall to consider President Donald Trump’s nominee, Brett Kavanaugh.

Shortly after Kennedy’s announcement, McConnell declared that a Senate confirmation vote of Trump’s pick would take place long before the election. Senate Minority Leader Chuck Schumer called it “the absolute height of hypocrisy.”

Everything about this “let the people decide” argument is exaggerated, upside down and wrong. And both political parties are stepping on themselves trying to get, or stay, ahead of the other.

Although it was clearly invented because it was politically expedient, McConnell tried to explain his 2016 doctrine as “following a longstanding tradition of not filling vacancies on the Supreme Court in the middle of a presidential election year.”

It is indeed rare for Supreme Court vacancies to open up during presidential election years. It has only happened four times in the last century, but in three of those instances, the justice was still confirmed by the Senate. It’s hard to argue something that happened only once over a 100-year period can be considered “a longstanding tradition.”

The 2016 McConnell doctrine is completely bogus, yet so is the accusation that he is now a hypocrite for not adhering to it in 2018. While both 2016 and 2018 are national election years, McConnell’s doctrine was created in the context that it was a presidential election year.

Even though a third of the Senate — which confirms Supreme Court nominees — is up for re-election this fall, McConnell’s argument two years ago was clearly about who occupies the White House. And McConnell has never asked for delays in past midterm election years when a court seat opened up.

Democrats in effect undermine themselves by demanding McConnell follow the “precedent” that he set in 2016. Schumer said on the Senate floor that Republicans should be consistent with the rules they set. But in asking the same, it is the Democrats who end up not being consistent. By requesting to delay the confirmation vote, that essentially means Democrats are acknowledging the legitimacy of a precedent that for over a year they argued was not legitimate — a precedent that facts and history show is not legitimate.

“Tell your senators to hold the line. Tell them to refuse to hold a hearing,” New York’s Sen. Kirsten Gillibrand tweeted last week. “Tell them not to confirm anyone until after the midterm elections.”

That’s a different tone from March 2016 when Gillibrand tweeted that “the Senate has a constitutional duty to consider Judge Garland’s nomination, I’m hopeful he’ll get a hearing & full Senate vote. #DoYourJob.”

Even in a moral and just world where lawmakers waited until after elections to vote on Supreme Court nominees, you know how much a difference it would make? Not one bit.

Republicans, including moderates like Sen. John McCain, didn’t hide that they were prepared to block any Supreme Court justice Hillary Clinton would nominate if she had been elected president but the GOP retained control of the Senate. Wait, what happened to letting the people decide?

And if Clinton won the presidency and Democrats won back the Senate? There’s no doubt Republicans would have rushed to confirm Judge Garland before Clinton and the Democrats had the opportunity to nominate someone more liberal after being sworn into office.

And what if McConnell magically decided to wait until after this year’s midterm elections and Republicans end up retaining control of the Senate? Does that mean opposing Democratic senators would say “well, the people have spoken” and suddenly lend their support for Trump’s nominee? I think not.

It’s unfortunate that we will probably go through this charade every time a Supreme Court justice position opens up. But we must try to discontinue this useless argument over letting elections decide who goes to the high court. It does not come down to that and it never will. Like all other things political, it comes down to who is in power, and who isn’t.